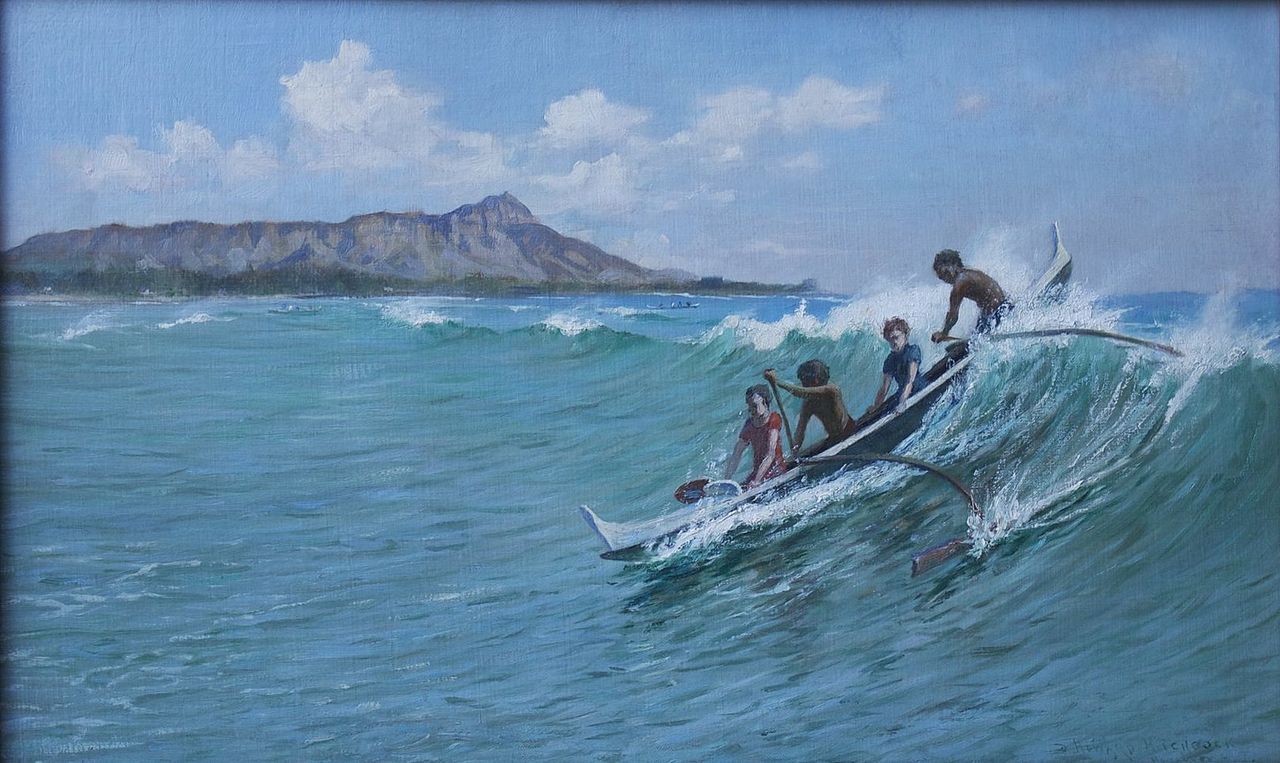 Hawaiian History Month is an initiative created and led by Hawaiʻi Ponoʻī and celebrates moments and events in moʻolelo every September. Check out our Instagram for Reels about the following events!

Many know that board surfing (heʻe nalu) was unique to Hawaiʻi and enjoyed by both makaʻāinana (commonders) and aliʻi (chiefs). But did you know there are different types of surfing?

Pākākā nalu is canoe surfing. Kamehameha I was said to be very skilled at this and could be seen in Kawaihae or off the waters of Waikīkī with his companions. Like heʻe nalu, the tradition of kaha nalu (body surfing) was also popular and documented in such moʻolelo as Hiʻiakaikapoliopele and Lāʻieikawai. Heʻe puʻe wai (river surfing) happens when a continuous wave is created by river flash floods running off into the ocean. You can still see people enjoying heʻe puʻe wai today in places like Waimea (both Oʻahu and Kauaʻi).

Keahumoa is a plain near Waipiʻo in the ʻEwa moku and the last place where Kualii “battled” to rule the islands from Hawaiʻi to Niʻihau. This is where the chiefs of Koʻolauloa came to meet Kualii to fight. When they all arrived at Keahumoa, Kualii’s warriors surrounded the Koʻolauloa army and trapped them. It was said that the Koʻolauloa army was made up of 1,200 people while Kualii’s army was 12,000 or more.

Upon hearing about the “battle” of Keahumoa, the Kauaʻi chiefs ceded their land to Kualii.That’s how Kualii became the ruler of the islands from Hawaiʻi to Niʻihau.

There are different versions of the moʻolelo of the shark goddess, Kaʻahupahau, but all agree that Kaʻahupahau protected Ke Awa Lau o Puʻuloa (the many harbors of Puʻuloa) from man-eating sharks (niuhi).

In one story, a visiting group of niuhi came to Puʻuloa, pretending to be non-man eating sharks. One of the visiting sharks commented how delicious the “crabs” looked. Kaʻahupahau knew immediately that the shark was referring to humans as crabs, so she turned herself into a net and trapped them. Then, her brother, Kahiʻukā, started hitting them with his tail. This is how the people of ʻEwa were safe from shark attacks.

It is said that after the dredging of Puʻuloa to create “Pearl Harbor”, Kaʻahupahau left her home and now, only visits occasionally.

The breadfruit tree of Leiwalo is said to be located at Leilono in the Hālawa ahupuaʻa on Oʻahu, alongside the border between ʻEwa and Kona moku near Kapūkaki.

Similar stories are told of the Leina-a-ka-ʻuhane at Kaʻena. ʻUhane make their way to the leina at Kaʻena to leap into the water. If they have ʻaumākua, the ʻaumākua will tell them which side to jump. If they don’t then they would jump off the wrong side to Milu.

Every island has a leina a ka ʻuhane and an ao ʻauana, or a place where ʻuhane wander aimlessly. A few examples of ao ʻauana include Kamaʻomaʻo on Maui, Uhana on Lānaʻi, Maohelaia on Molokai, Kaupeʻa on Oʻahu, Mana on Kauaʻi, and Halāliʻi on Niʻihau.

Note: Orthography was not added to inoa if the inoa could not be found in Place Names of Hawaiʻi.