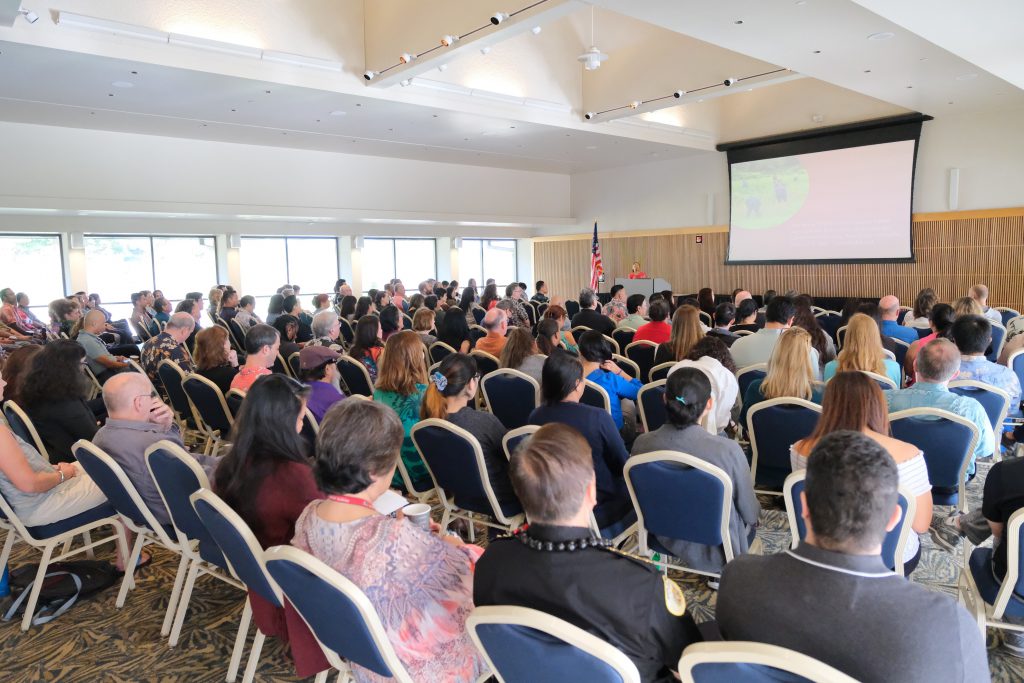 Faculty and staff assembled to hear about the campus’ 2018 accomplishments and plans for 2019.

UH West Oʻahu faculty and staff were given a preview of 2019 goals and work for the campus along with reminders of 2018’s accomplishments and progress as they gathered for the 2019 Spring Semester’s convocation and professional development day. 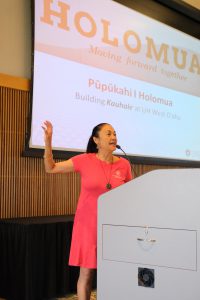 Chancellor Maenette Benham welcomed faculty and staff back to campus and along with vice chancellors and staff, listed UH West Oʻahu’s achievements and plans during the meeting at Campus Center’s multi-purpose room. The day also included three smaller sessions during which a high-level overview was presented on administrative initiatives, an introduction to the campus’ Chinese Language and Culture Program, and Compliance issues, including harassment.

The semesterly meetings mark an unofficial start to the Spring and Fall semesters and include a recognition of new and long-time employees and events to help bring the campus community closer.

Benham noted the past year had been filled with landmark events for the campus, including the inaugural awarding of Nā Lehua Ula medallions honoring notable alumni and the hosting of the 2018 National Sustainable Agriculture Education Conference. C-SPAN American History featured the ‘Uluʻulu Archive and the Library’s Daniel K. Inouye Collection, while historic Isami Enomoto murals installed near the offices of the Center for Labor Education and Research received a preservation award from the Historic Hawaiʻi Foundation.

“It gives me chicken skin to know we are moving forward,” said Benham, explaining 2019 marks her third year at the UH West Oʻahu and that the campus had heeded her for moving forward together, or Pūpūkahi I Holomua.

Among the other accomplishments listed by Benham were:

Benham noted her top three events of the year were the completion of the Administration and Health Science Building; the initiation of Kaiāulu (establishing and implementing a process to build a community of professional respect and Aloha); and the development of the UH West Oʻahu Strategic Action Plan. 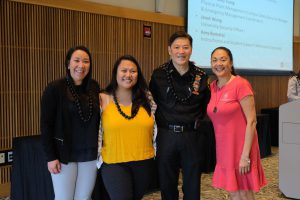 Faculty and staff accomplishments were also cited, including the Disaster Preparedness & Emergency Management program being ranked as having the fifth-best online degree program in emergency management in the nation. Rouel Velasco, Student Life Coordinator, said the campus is transitioning to having more student-led events.

“It is definitely an exciting time for the university,” Velasco said.

A Research Group was established to aid in the obtaining of more extramural funding for the campus, a Nā Pou Hana donor wall was created in the Administration and Health Science Building to honor campus benefactors, and a $25,000 gift was received from the Hawaiʻi Pacific Foundation for Soft Power Solutions for support of the UH West Oʻahu Education Pathway Program. A $17 million EB-5 loan was repaid.

Plans for the coming year center around implementation and execution of the campus’ Strategic Action plan. The building out of a Testing Center for CLEP and other testing, increasing student retention and exceeding Native Hawaiian performance objectives.

The Office of Vice Chancellor for Academic Affairs will continue to work on a reorganization and on receiving approval for new Bachelor of Science in Natural Sciences and a Bachelor of Arts in Creative Media degrees; the development of concentrations for Health Science, developing and implementing a Distance Learning Strategic Plan and preparations for accreditation.