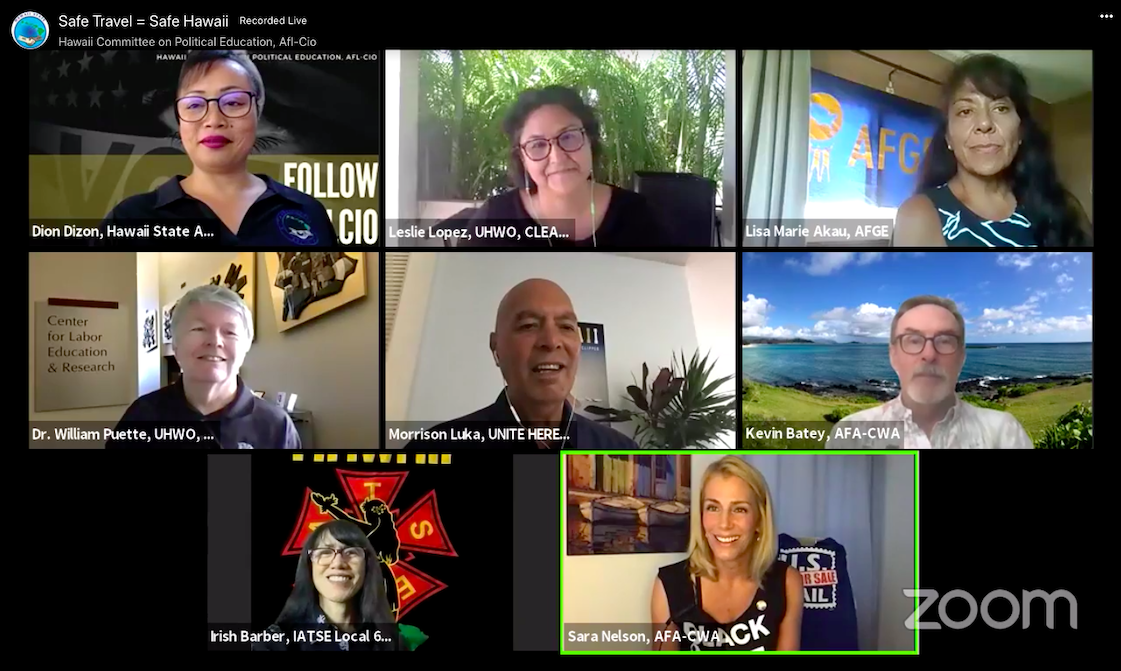 Sara Nelson (lower right), International President of the Association of Flight Attendants-CWA, AFL-CIO, was a guest speaker at a virtual event hosted by CLEAR.

National labor leader Sara Nelson – whom the New York Times called “America’s Most Power Flight Attendant” – spoke about the safety and health of workers through the example of Hawaiʻi’s transportation workers during “Safe Travel = Safe Hawaiʻi,” hosted by the University of Hawaiʻi–West Oʻahu Center for Labor Education and Research (CLEAR).

Nelson is the International President of the Association of Flight Attendants-CWA, AFL-CIO, which represents nearly 50,000 flight attendants at 20 airlines. A United Airlines flight attendant since 1996, Nelson was featured last year in The New York Times article, “The Shutdown Made Sara Nelson Into America’s Most Powerful Flight Attendant.” A powerful voice of the U.S. labor movement, Nelson spoke at the virtual event held on Labor Day, Sept. 4, on national efforts to protect workers in the transportation industry.

“As the great labor organizer Mother Jones (Mary G. Harris Jones) said, ʻMourn the dead and fight like hell for the living,’ and we are doing that right now,” Nelson said at the beginning of her presentation, following a moment of silence for workers who lost their lives during the course of the pandemic. “We’re doing that by coming together today, honoring the people who have come before us, honoring the people who gave up their lives to give us the rights that we have.”

CLEAR, LaborFest Hawaiʻi, and the Hawaiʻi State AFL-CIO collaborated to co-sponsor the event, which drew 170 participants to the live Zoom meeting and more than 900 views to the recorded presentation on Facebook Live.

“Awareness and respect for workers’ rights and responsibilities combined with action by individuals is needed because the resilience and soundness of the community is directly connected to our well-being as workers,” according to a description of the event on its registration page.

The talk began with an overview of the history of Labor Day in Hawaiʻi by CLEAR Director Dr. William Puette. The Hawaiʻi Airport Labor Coalition (HALC) then introduced Nelson to speak.

“Our rights that we have as labor do not exist because they were just bestowed upon us … ,” Nelson said. “They were won because people thought it was important enough to stand up for each other and to fight against all odds for a better day for ourselves, and for our families, and for our fellow co-workers.”