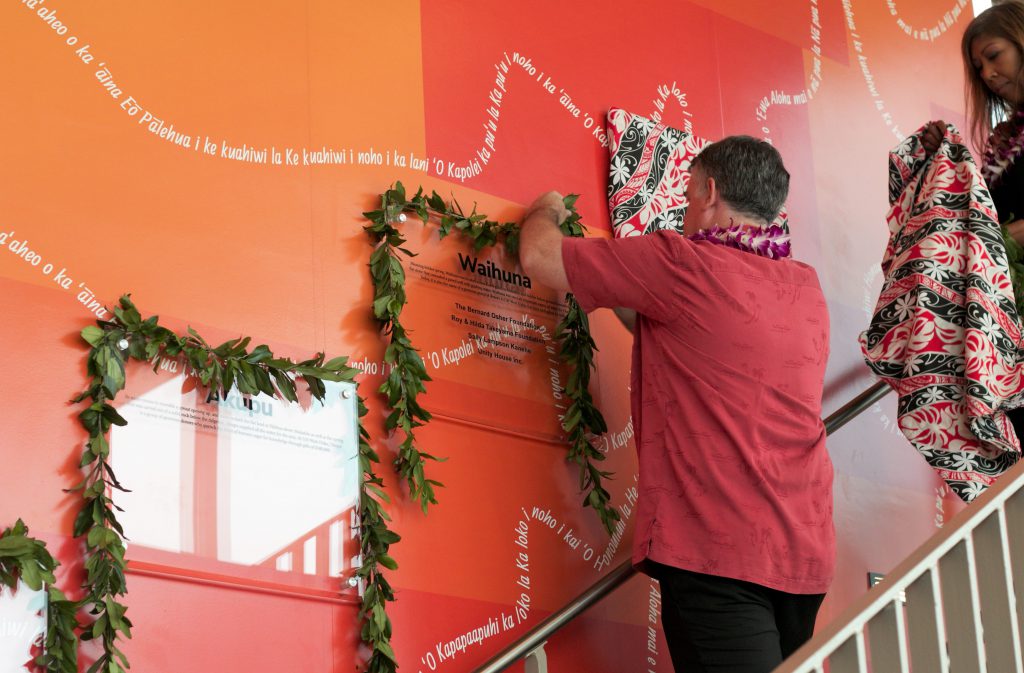 Plaques honoring donors were unveiled and draped with maile lei during the ceremony.

UH West Oʻahu’s largest donors were celebrated and honored on Friday, when plaques noting their contributions were unveiled on specially designed plaques in the newly opened Administration and Health Sciences Building.

Twenty-four donors who supported UH West Oʻahu through gifts of $50,000 or more were acknowledged during a ceremony that drew University of Hawaii System President David Lassner and Donna Vuchinich, president and chief executive officer of the UH Foundation. It was the last public event as head of the foundation for Vuchinich, who is retiring at the end of November. 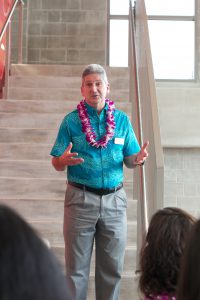 “Thank you all for your part in supporting our students and programs,” said Lassner, who explained West Oʻahu was once identified as having some of the state’s most pressing needs for higher education and that the UH West Oʻahu campus helps UH address that deficiency.

The Nā Pou Hana (literally, support poles in traditional Hawaiian homes, or figuratively, the support and mainstay of a family) Celebration highlighted the contributions of donors who have made more than $7.4 million of contributions to UH West Oʻahu since its opening in 1976.  The gifts have gone to support the campus’ various activities, including scholarships, faculty and staff support, curriculum development, film projects, and international initiatives.

“Several of you took a “leap of faith” with us, making generous gifts when we were just beginning to develop the dream of UH West Oʻahu,” Chancellor Maenette Benham told the donors. noting at some institutions the donors would be called members of a “Founders Circle.”  “Here at UH West Oʻahu you are our Nā Pou Hana.” 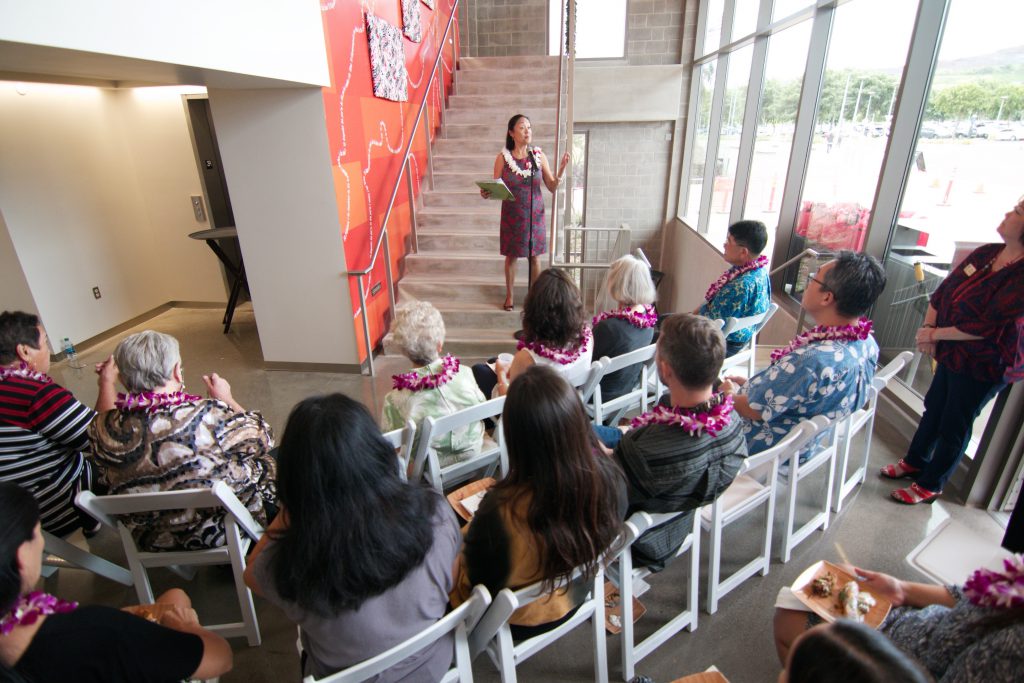 That fact wasn’t lost on donors who see their gifts as doing their part to support the community.

Hongmin Jung, representing donor DB Insurance, said the company’s gift helps support the community and more specifically, a campus with a Certificate in Risk Management and Insurance in the state.

“The person who is educated here will be a person who works for our company someday,” he said.

The event was held in the lobby of the Administration and Health Sciences Building, where the topography and terrain of the Honouliuli ahupuaʻa surrounding UH West Oʻahu is represented through the rendering of words from Mele Honouliuli by Puʻu Zablan onto a striking floor-to-ceiling mural in gradients of red and orange.  Four plaques calling attention to donors have been installed on the wall, along the stairway ascending to the building’s second floor. Both the wall and plaques were designed by UH West Oʻahu graphic designer Brian Miyamoto.

Vucinich thanked the donors for their givings, adding “all of you have made such a wonderful investment.”

“Mahalo nui loa to all of you.”

The donors who were honored include:

A set of four elegant plaques were unveiled during the ceremony, the first of which carried the names of all 24 Nā Pou Hana donors who have provided the mainstay of support for the UH West Oʻahu ʻohana. This plaque will remain unchanged in the years ahead.

The campus hopes to add names to each of the remaining plaques as more donations are made to the school. The second plaque carries the symbolic name ʻĀkupu (to resemble a sprout opening up) and refers to a spring that supplied water for the area.  It is reserved for donors who contribute $500,000 or more to the school.

The third plaque is Waihuna (hidden spring) and refers to what was once an important source of water for Honouliuli.  Donors who are listed on this plaque have gifted $1 million or more. The forth plaque is Kaloʻi (the taro field) and is a reference to an area that once was famous for its delicious taro.  Benham said part of UH West Oʻahu is located on part of Kaloʻi and noted that Kaloʻi also refers to those who will feed the minds, hopes and aspirations of the UH West Oʻahu learning community.  Donors who generously make gifts of $5 million or more will be listed on this plaque.

Besides being thanked for their generosity, the donors were treated to refreshments and pūpū along with a tour of the new building, which has a grand opening on Dec. 12.  The guests were also treated to music performed by UH West Oahu students, including: