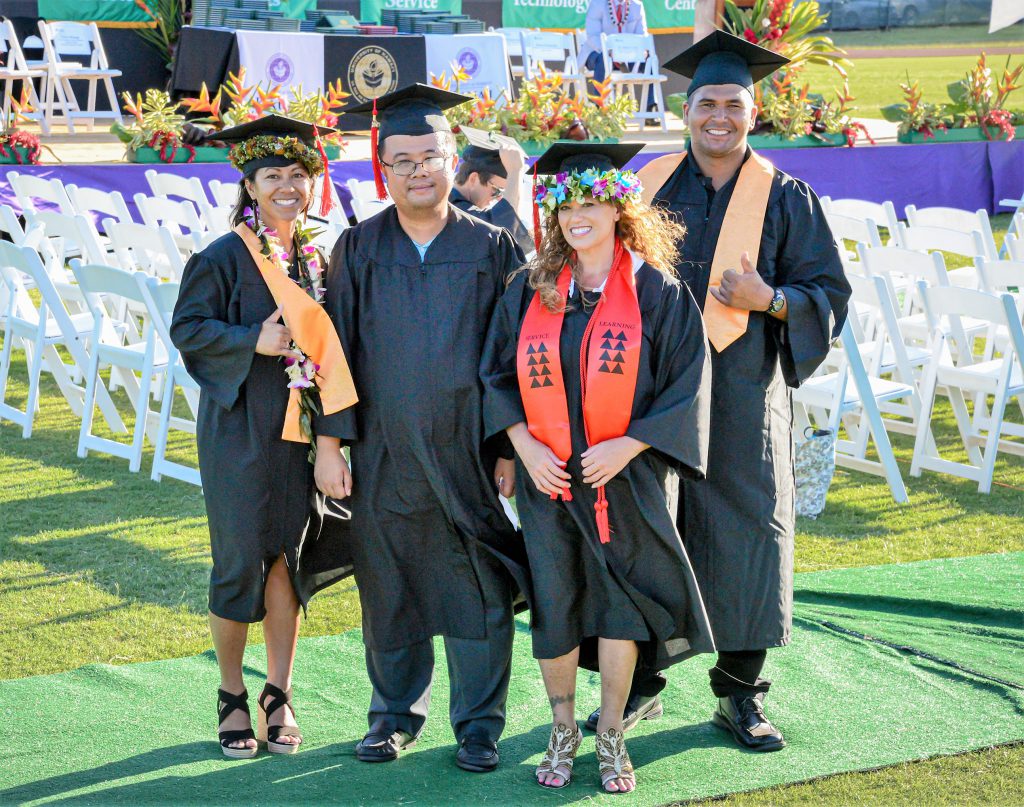 Among the more than 300 UH West Oʻahu students receiving degrees and certificates at the end of the Spring 2019 semester were dozens of graduates who rarely, if ever, stepped onto the Kapolei campus.

Some 55 graduates received degrees from UH West Oʻahu, but took their classes while residing on the Neighbor Islands. This included 31 graduates on Maui, 12 on Kauaʻi, seven on the Big Island, three on Molokaʻi, and two on Lanaʻi. 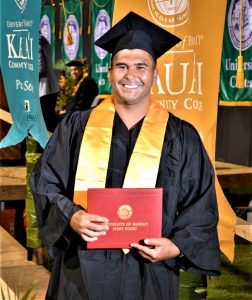 Rheif Callahan, a Kauaʻi resident who received a Bachelor of Business Administration with a concentration in accounting, was among four UH West Oʻahu students receiving their degrees during Kauaʻi Community College’s May 10 commencement ceremony. Under an agreement, distance learning students can participate in the college’s ceremonies and receive their degree from a UH West Oʻahu representative.

“All in all, it was a great experience,” Callahan wrote in an email. “I had a lot of great instructors, even though I never met them, and despite being on another island they were quick to respond to my questions and I even felt I got to know them a little bit. Thank you Katie Landgraf, Leslie Rush, and Edward Keaunui for helping me get my BA and making a positive impact on my life.”

During any given semester upwards of 300 students, or roughly 10 percent of the UH West Oʻahu’s enrollment, list their permanent home addresses as those on Maui, the Big Island, Kauaʻi, Molokaʻi or Lanaʻi. The students take courses through online classes or through Interactive Television (ITV) where classes are live streamed, allowing the scholars to to participate virtually as the course is being taught on the UH West Oʻahu campus.

UH West Oʻahu is not the only UH System campus to offer distance learning degrees and certificates, but has the highest percentage of distance and online courses and programs, according to a 2017 Board of Regents report on integrating and aligning UH System’s 10 campuses. The report noted distance and online programs are a focus area for the Kapolei campus as it seeks to increase its enrollment. 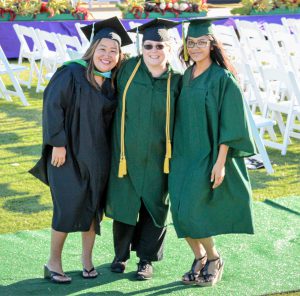 For Neighbor Island students, UH West Oʻahu’s distance learning program (and those from other UH campuses) are a way to pursue a four-year degree without having to leave home or uproot families to move to Oʻahu. Callahan, a 2008 graduate of Waimea High School, was able to study accounting without having to give up a career he’d established on Kauaʻi.

“I play music for income and through it I was able to pay for my education while still having ample free time to study,” wrote Callahan, a bass and guitar player in several groups on the Garden Island.

As it was, Callahan could keep the regular gigs that would have been lost if he had moved. He took mostly online courses and when required, visited Kauaʻi Community College’s University Center for advising. According to Dr. Gloria Niles, UH West Oʻahu director of Distance Education, University Centers serve as “brokers” with UH campuses that offer baccalaureate or higher degrees. That allows Neighbor Island residents to remain on their home island and earn bachelor’s and graduate degrees or certificates from the other island campuses, including University of Hawaiʻi at Mānoa and UH Hilo.

Niles said UH West Oʻahu also makes an effort to offer academic services to students on other islands.  Students can seek out online tutoring help and online workshops from the campus’ Noʻeau Center along with chats about services with librarians. Virtual meetings are available with Academic Advising and Career Services through video conferencing, Niles said.

UH West Oʻahu is ranked as Hawaiʻi’s Best Value Online School by BestValueSchools.com. The campus’ online Bachelor’s degree in public policy and administration program is ranked second in the nation by BestColleges.com, while it is No. 9 on the list of Top 10 Colleges to Get an Accredited Business Degree Online by GoPius.com.

Callahan, who earned an Associate in Liberal Arts from Kauaʻi Community College, said he liked the convenience and cost of getting a UH West Oʻahu degree through distance learning.

“Taking online classes was difficult at first but once I got the hang of it, I came to like it,” he wrote, explaining he liked the freedom to study and complete assignments when it was convenient.

“The biggest thing was making sure I followed the class scheduled and turned in all of my work on time. Each semester I had to come up with a personal routine of doing work and staying on top of things.”

Callahan said he had only been to the UH West Oʻahu campus once, and that was by chance. He purchased the wrong textbook online and by coincidence had a trip to Oʻahu. So he went to the bookstore.

There are some distance learning students who do more than just quick stop, though.  Some participate in the UH West Oʻahu commencement ceremonies in the campus courtyard. Kanānāikahaku Kuhaulua was a speaker at both the Spring ceremonies for UH West Oʻahu and Kauaʻi Community College.

Callahan was happy to complete his college career in front of family and friends by attending Kauaʻi’s ceremony at Vidinha Stadium in Līhuʻe. Three other UH West Oʻahu and three UH Mānoa distance learning students had degrees conferred on them during the evening commencement.

“The best part about the commencement ceremonies was that I got to congratulate all of my friends that were graduating from KCC and to meet new friends who were also graduating distance students.”