Share your stories with others. Make a difference in this world. Continue to persevere throughout life.

These are some of the uplifting messages three students — Aiga Ale, Jesse Mikasobe-Kealiinohomoku, and Michelle Zheng — hope to convey to their fellow graduates and all those in attendance at University of Hawaiʻi–West Oʻahu’s Spring 2022 Commencement on Saturday, May 7, on campus at UH West Oʻahu.

This spring 2022 semester, Ale, Mikasobe-Kealiinohomoku, and Zheng are among more than 400 students who are candidates for graduation, the highest number to date for UH West Oʻahu. Of these students, nearly 270 will be participating in commencement, which features two in-person ceremonies:

The student speaker selection process involved faculty and staff nominating their students, who were contacted to submit an application. A total of nine applications were received. ASUHWO Senate oversaw the process, which called for an independent selection committee to review applications and hold auditions. The selection committee then forwarded their recommendations to the commencement committee. The criteria for commencement student speakers included the following: involvement on campus; where they are headed; a theme/concentration of their experience (i.e. persistence and resilience); and GPA.

“A total of nine applications received highlighted the diverse backgrounds, identities, and experiences of UH West Oʻahu graduating students for spring 2022 — and all of them are ideal student speakers,” said Rouel Velasco, ASUHWO Advisor and Student Life Director. ”All nine students shared personal stories of resilience, hope, and growth. Each speech and story presented was inspiring.”

Ale, one of the three selected student speakers, is looking forward to the upcoming commencement.

“Everything I do is for my family, so it’s not just a big day for me,” she said. “This accomplishment is dedicated to my family, especially my mom, who’s sacrificed so much to build a solid foundation for me to succeed.” 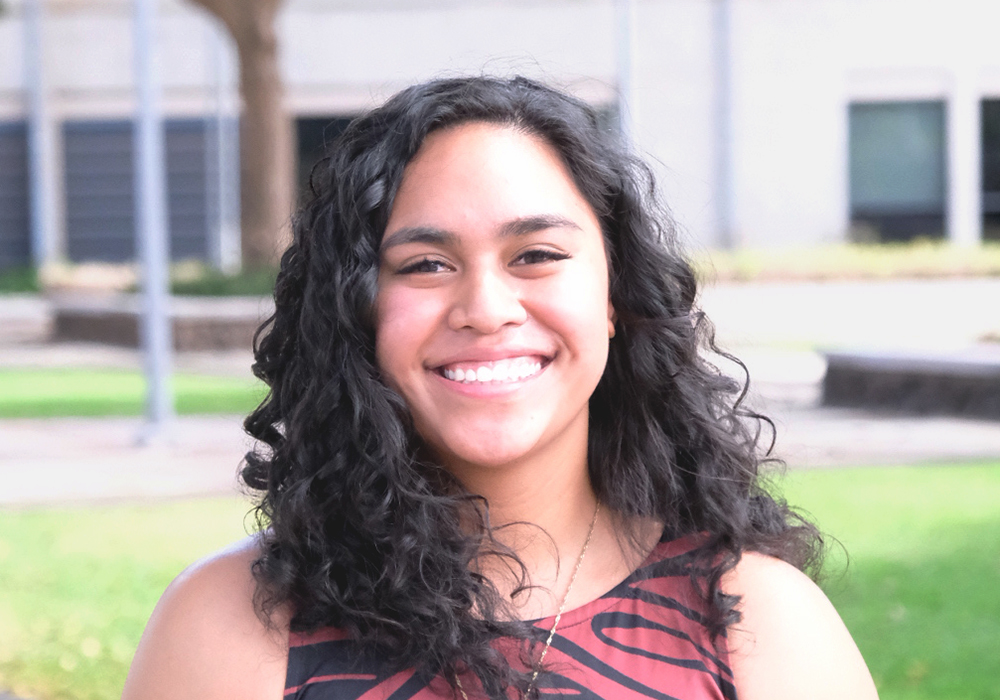 Among Aiga Ale’s most notable accomplishments as a UH West Oʻahu student was becoming the first organic chemistry tutor at the Noʻeau Center.

“Before going into organic chemistry, I was absolutely terrified because I heard it was one of the hardest science classes in undergrad,” Ale said. “But it ended up being my favorite class and I went on to tutor it because I absolutely love this subject.”

Ale continued, “Being the first for something like that, I feel like as a Sāmoan woman, it was a big accomplishment because I’m hoping it’ll inspire more Pacific Islanders to go into STEM. … I want people to say, ‘If she can do it, so can I.’ ”

As a commencement student speaker, Ale hopes to emphasize to those in attendance the importance of people sharing with one another their stories — such as inspirational ones like hers.

“One of my biggest role models at UH West Oʻahu, Joseph Mareko, reminded me that we Sāmoans come from a long line of storytellers and sharing our stories can help heal, inspire, or build deeper connections with others,” she said. “By sharing my story, I’m hoping to do the same.”

A big part of Ale’s story is her family.

“This upcoming graduation is super special to me because my parents stressed the importance of education and how it’ll open many doors to success,” she said.

Ale shared that her dad passed away in 2011.

“I know how much he wanted us to succeed in academia and I can still picture that big smile he had when I graduated from 6th grade,” Ale recalled. “So graduating from college is kind of that — ‘I did it, dad. We’re here. I made it’ — moment.”

Mareko, a College Success Advisor at UH West Oʻahu, said Ale’s excellence in her academic journey and campus engagement emulates the resilient will of Sāmoan women.

“I have seen her, as a student, break barriers while navigating this new path with humility, grit, and grace,” Mareko said. “I am honored to know her story — one that I believe will bring hope and healing to our communities. As her advisor and fellow Sāmoan, our people speak of legends who led with compassion and alofa (love), which I see her fostering on and off campus.”

After graduation, Ale will attend the Ben and Maytee Fisch College of Pharmacy at the University of Texas at Tyler in the fall. She hopes to become a clinical pharmacist.

Wherever her path leads, Ale won’t forget the people at UH West Oʻahu who helped her along the way.

“I think that’s why I’ve been so successful in my studies — because of the endless support from the faculty and students who I basically consider my second family,” Ale said. “So when I graduate, I’m always going to strive to build that sense of community wherever I go and, of course, to always be kind.” 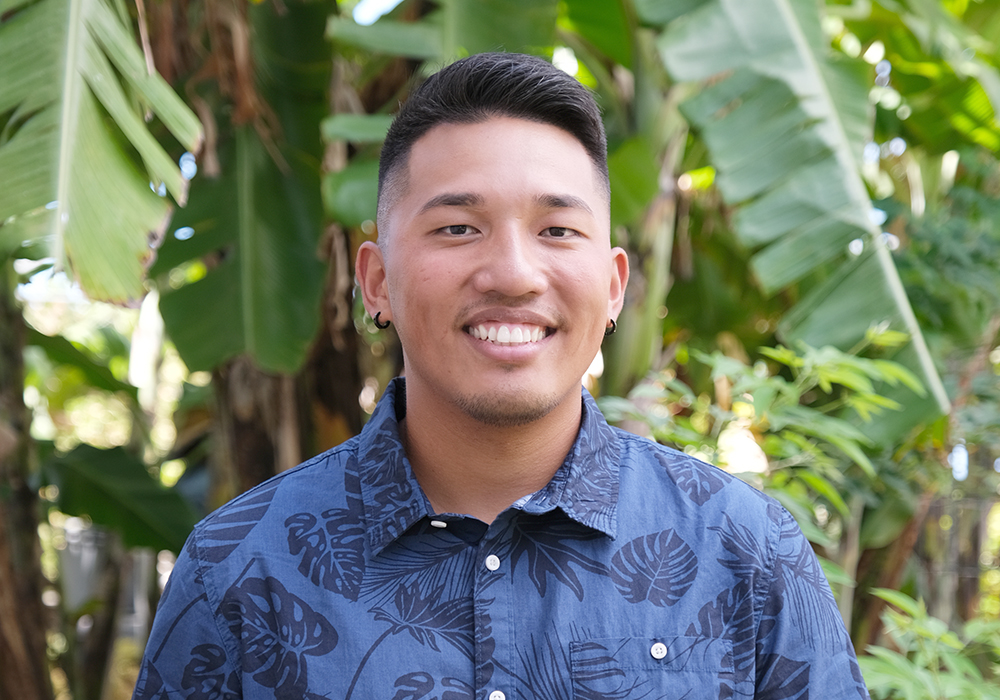 The upcoming UH West Oʻahu commencement will be especially meaningful for Jesse Mikasobe-Kealiinohomoku, the first in his family to choose the path of a college education.

“Graduating with my undergraduate degree is a huge stepping stone to a healthy and happy life,” he said.

For Mikasobe-Kealiinohomoku, part of pursuing a fulfilling life means helping others.

“Intentions shouldn’t be just about aspiring to make a living — aspire to make a difference,” he said.

This is part of the message Mikasobe-Kealiinohomoku hopes to share when he takes to the podium at commencement as a student speaker, a task bestowed upon exemplary graduating students.

“When I first met Jesse, one of the things that really stood out to me was that he just radiated aloha,” said his College Success Advisor, Rebecca Carino-Agustin.

Carino-Agustin continued, “Jesse is also such an eager learner and this showed during each of our advising sessions. He was always prepared with questions pertaining to getting through school and it was clear that his goal was to ultimately better his community as he always inquired about opportunities to get involved, really trying to maximize his time here at UH West Oʻahu.”

One of those opportunities was getting involved with NiU NOW!, a movement whose mission is to strengthen Oceania’s knowledge, connection, and aloha for cultural food sovereignty.

“My most notable achievement at UH West Oʻahu is participating in carrying out the collective vision (of) NiU NOW! through the creation and implementation of Aloha ʻĀina Student Service Club,” Mikasobe-Kealiinohomoku said.

Mikasobe-Kealiinohomoku is the current president of the club, which offers an opportunity for people to learn how to work the land with their hands and to get a better understanding of plants.

It’s a personal passion for Mikasobe-Kealiinohomuku, a Native Hawaiian plant conservationist and farmer who in his free time enjoys the practice of growing a diversity of plant varieties.

“Through these practices I want to emphasize that it’s very fun to share plant material as we try to advance a more equitable food system,” he said. “I also see the sharing of plants as empowerment of others in the growing of their own food and participating in systemic change.”

Mikasobe-Kealiinohomoku, who is exploring the possibility of graduate school, aspires to continue this work long past his studies.

“So far, I have my mind set on utilizing my degree in Food Systems on either the state or national level to assist my community in advancing a more sustainable and equitable food system,” he said.

Mikasobe-Kealiinohomoku said UH West Oʻahu has helped him prepare for his post-graduation goals by providing the foundation and support for him to be successful, and empowering him to be a leader.

“Attending UH West Oʻahu has educated me to understand where I want to be in the future, and it has opened up so many opportunities that I am grateful for,” he said. 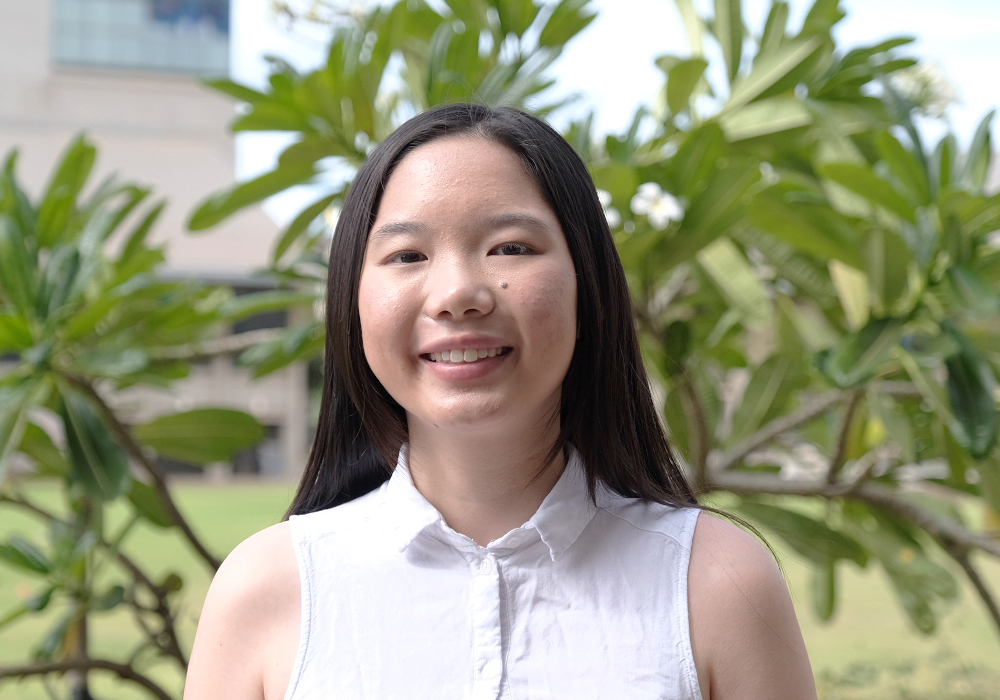 For Michelle Zheng, confidence is key — thanks to UH West Oʻahu.

“Beyond the formal education of how to write papers, do research, and manage time, I think the biggest thing UH West Oʻahu has taught me is just to be confident and trust in my skills,” Zheng said.

She continued, “There were a lot of moments in my journey where I thought — ‘I can’t do that’ or ‘I’m not ready’ — but the people and the opportunities presented to me while at UH West Oʻahu gave me chances to break out of my comfort zone and try things I never would have thought possible.”

One such opportunity was becoming editor of The Hoot, UH West Oʻahu’s student-run newspaper. Then the pandemic hit.

“Despite not having a formal advisor, I pulled together my team and we were still able to get two issues a semester out,” Zheng said. “Would I have volunteered for that role at first? No way. But duty called and I was able to step up to the plate.”

Other opportunities at UH West Oʻahu resulted in a great sense of pride for Zheng, including creating wall decals and sticker designs for the Noʻeau Center, and working on her senior project, an animation of Aunty Puanani Burgess’ Building a Beloved Community story, “Boy with a Gift.” The project really inspired Zheng to explore how to contribute to her own community.

“Michelle is one of those students who makes the most of every experience,” said Sharla Hanaoka, Director of the Academy for Creative Media at UH West O‘ahu and Zheng’s faculty advisor. “Her open-mindedness really helped her creative journey as she explored the many ways of storytelling that allowed her to grow tremendously as an artist and as a person.”

“Looking ahead, I would like to continue to share stories through different mediums, whether that be on film, videos, or animations,” Zheng said. “I hope to elevate smaller voices and share important stories with people, but most importantly, just make people laugh and feel supported.”

She added, “I am grateful for the life I have been given and I just want to continue to put good into the world whether that is through art, activism, or just being a good friend.”

But as for her more immediate future, in her upcoming role as a commencement student speaker, Zheng wants to tell her fellow graduates to be proud of what they’ve accomplished and to continue persevering.

“No matter how long their journey may have taken or if they are on a completely different road than when they first started, they made it to that metaphorical end of the road,” Zheng said. “And as they look forward into the future, I hope they never forget the feelings of warmth and support that got them there, and I hope they reciprocate it to make the world a better place.”

From “Songs of Aloha” to “America the Beautiful” and “Star Trek Into Darkness,” there's something for every music lover at an upcoming concert by...
Read more
Class Act

Launch of ‘The Eddie Kamae Songbook: A Musical Journey’

Years in the making, “The Eddie Kamae Songbook: A Musical Journey” will be shared with the public for the first time. Published entirely online,...
Read more
West O‘ahu Happenings

In an effort to raise awareness about the crisis at Red Hill/Kapūkakī and military contamination of water, an interdisciplinary team of University of Hawaiʻi...
Read more