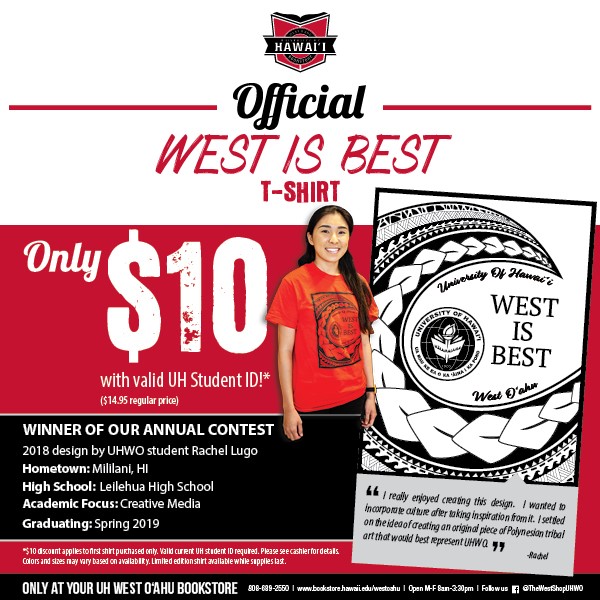 Rachel Lugo, an Academy for Creative Media student, is the winner of the annual “West is Best” T-shirt contest, having received more votes than two other finalists in the competition organized by the UH West Oʻahu bookstore.

T-shirts with Lugo’s design have gone on sale at the bookstore with a discounted price of $10 (first shirt only) for students with valid student ID. Lugo won a $100 gift card and a T-shirt emblazoned with the design.

Lugo, a 2015 Leilehua High School graduate who will earn her Bachelor of Arts in Humanities with a focus in Creative Media degree this semester, created a kapa-like design curling around the campus logo and the words “West is Best”.  Voting on the three finalist designs was done online late last year, with Lugo being declared the victor.

“I really enjoyed creating this design,” Lugo said. “I really wanted to incorporate culture after taking inspiration from it. I settled on the idea of creating an original piece of Polynesian tribal that would best represent UH West Oʻahu.”