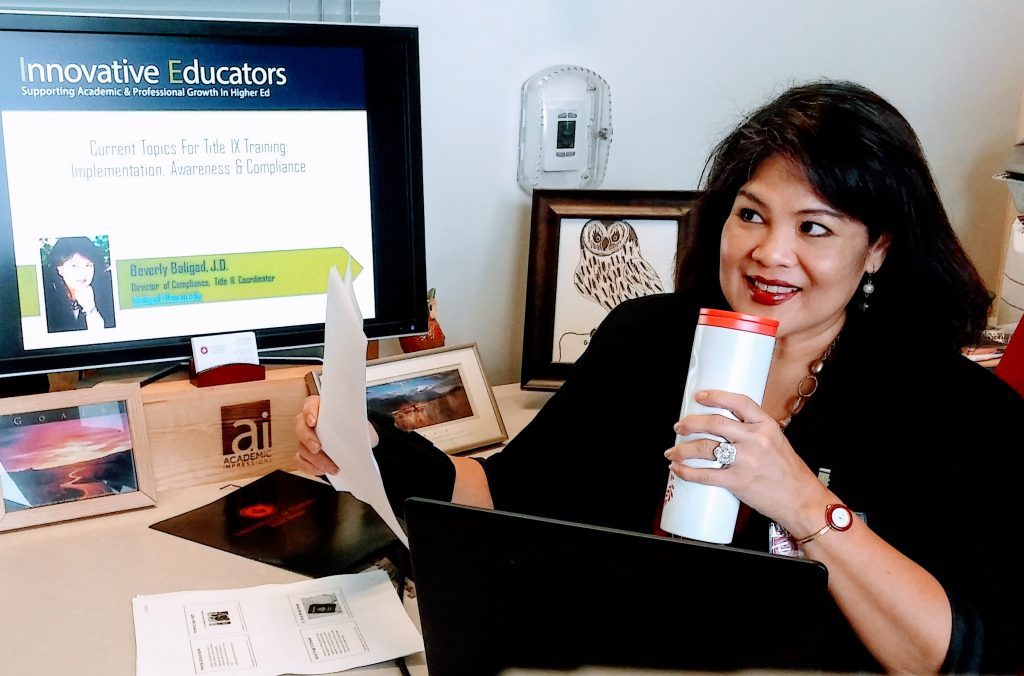 Bev Baligad may have what is the ultimate competitive edge.

As UH West Oʻahu’s director of compliance, Baligad poses an uncanny ability to read lengthy federal laws and translate them into understandable nuggets delivered in a compelling way. Baligad’s wealth of knowledge and operational experience about a number of thorny compliance issues for university campuses make her an in-demand speaker on the subject.

Need a speaker to talk about Title IX issues? Want to know best practices for behavior intervention teams? Unsure about compliance with the Violence Against Women Act?

What arcane requirement of the Clery Act gives colleges fits? Baligad knows and can talk about these and other statutes.

“Bev is in high demand!” said Rabia Khan Harvey, senior program manager for Academic Impressions, a Denver-based company that helps colleges and universities nationwide with training and information to improve their operations.

“After participants meet her for the first time at a conference, there are always a handful of inquiries from participants requesting that she teach the rest of their colleagues on their own respective campuses! She presents nationally with Academic Impressions at least twice a year for conferences and hosts a handful of webcasts annually.”

Baligad’s journey is an unlikely one given her own performance in college. After graduating from Pearl City High School (Class of 1985), she attended Leeward Community College and then the University of Hawaiʻi at Mānoa, graduating with a degree in English Literature in 1993. Baligad says her grades weren’t the best and after a detour to teach at-risk kids in Hawaiʻi and Texas, she landed at Western Michigan University Cooley Law School in Lansing.

After graduating and passing the Michigan Bar exam, Baligad joined her husband Tom Hirsbrunner in a general law practice, something that afforded her exposure to a range of legal work that came through the door – adoptions, probate, defense work, and business filings were typical jobs from clients. She also did work for the Lansing Community College Board of Trustees and eventually wound up working as the executive assistant to the president of the school, which was the fifth largest community college in Michigan. Current enrollment is between 18,000 to 21,000 students.

It was in that job that Baligad realized that college and university executives were paying for training on Title IX and other compliance topics that was almost worthless.  She remembers attending a conference where presenters spun through explanations in legalese and witnessed many participants walking out confused and ill-equipped to deploy the speaker’s recommendations on their home campus.

Back at Lansing Community College, Baligad did her best to break down extremely complex laws for the campus’ staff. Her boss took notice and appointed her the campus’ Student Title IX coordinator. Baligad describes feeling like she had drawn the short straw given the tall task, but addressed the campus’ issues and procedures with the same tenacity she addressed all other issues she was assigned.

The new job required her to do hours of research on various compliance topics to figure out what was required and how to do it. She also became director of student compliance and training and created the college’s student disability grievance process and training for committee members; she also was the architect of the campus’ Student Behavior Intervention Team and did the implementation and training of the team members.

She also began training people from other Michigan community college system campuses as people took notice and eventually began doing conferences and workshops for other schools, including those organized by Academic Impressions, a company providing training and other services for higher education.

Academic Impressions’ Harvey said Baligad consistently scores “above average” or “excellent” with participants in terms of expertise. “She has a true gift of teaching and she makes learning fun,” said Harvey in an email. “She cares mostly about how participants will succeed on their respective campuses so she always provides herself as a resource for their future needs. She is excellent through and through!”

Baligad was contemplating a move back to Hawaiʻi in 2015 when she ran into Janice Sunouchi, a human resources specialist for UH West Oʻahu, which had recently advertised for a compliance officer. Sunouchi did her best to extol the virtues of the Kapolei campus when Baligad inquired about the job.  Later that year Baligad, Hirsbrunner and their son Zachary made the move to Oʻahu (Hirsbrunner also joined UH West Oʻahu as ADA/504 Coordinator).

Since that time Baligad has seemingly worked at a frenetic pace:

Baligad says there’s still plenty to do. With the first year behind the BIT, she hopes to build awareness of compliance issues through Compliance Hui issues and raise the profile of the BIT on campus. Baligad believes the BIT needs a higher profile so that the campus can become more aware about how to submit information regarding individuals (student, staff, or faculty) exhibiting concerning behavior.

She also maintains a busy schedule, using breaks and vacation time to do presentations on the Mainland.  The talks benefit the Kapolei campus in two ways. One, subject matter expert Baligad is billed as being from UH West Oʻahu, and two, Baligad donates a portion of her fee or honorarium earned to the school to help fund Compliance Hui programs.

Baligad said her skill as a speaker probably comes from her days as a litigator. As an attorney she didn’t accept settlements unless requested to do so by clients, instead believing her oratory and legal smarts gave her a fighting chance. These days her enthusiasm is translated into explaining a thicket of complex laws to university administrators anxious to learn how they can comply.

But Baligad’s knack for deconstructing dense statutes and recasting them in plain language may also stem from her days as a teacher for at-risk teens.  Baligad says she’ll watch her audience for the moment when someone gets it – the moment when the proverbial light bulb goes on.

“It’s the best feeling ever,” said Baligad, “I think I thrive on that.”

Indeed, and UH West Oʻahu is the better for it.