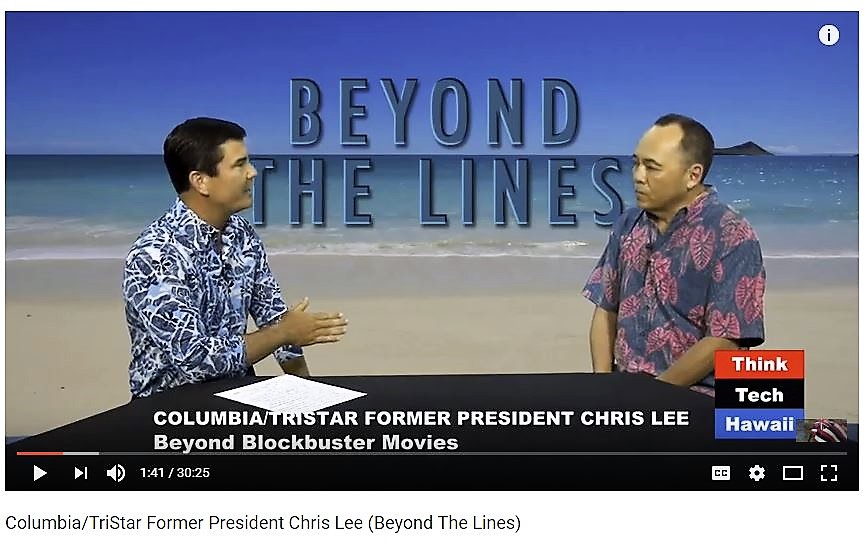 Chris Lee (right) discussed his career, success, and the Academy for Creative Media with Beyond the Lines host Rusty Komori (left).

Chris Lee, founder and director of the Academy for Creative Media System, appeared on Beyond The Lines, a local show exploring issues of leadership, achievement and success, to discuss his career, career tips, and the evolution of the ACM at the University of Hawaii and UH West Oʻahu.

Lee, who was President of Production for TriStar Pictures and Columbia Pictures before moving back to Hawaiʻi, appeared on the July 23 broadcast of the show, a copy of which has been uploaded to YouTube. Lee sat down with Rusty Komori, host of Beyond The Lines, and author of a book by the same name, to answer questions about his achievements and ACM.

Lee discussed his journey from ʻIolani School to Yale University and then to New York, where he worked on Good Morning America. Positions helping filmmaker Wayne Wang eventually led him to Los Angeles where he worked as a freelance script analyst and eventually became the first minority President of Production of a Hollywood film studio. During his Hollywood career, Lee oversaw Academy Award-winning films (Jerry Maguire, Philadelphia, and As Good as it Gets) as well as Executive Produced Superman Returns and Valkyrie.

Lee provided insight into the founding of ACM in 2002 and related information including:

Lee also parceled out advice and observations when queried by Komori, noting that people from Hawaiʻi should not feel they can’t be successful on the mainland. He pointed out that Albert Cheng, a Punahou School graduate, is chief operating officer of Amazon Studios as well as it’s co-head of television. Ryan Higa, a former Hilo resident, is a successful YouTube personality, he said. Lee also recommended people be willing to explore different things and take advantage of opportunities when they presented themselves. He did so himself when he left a good segment producer job with Good Morning America in New York City to get into the movie business in an unpaid job with Wang on the West Coast.

Lee also shed light on pitfalls for successful people. “I think it’s really easy to suffer from hubris. To think you know it all and think you are the smartest person in the room when you rarely are. I prefer to put myself in a room where everyone else is smarter than me, and to continually learn from them.”