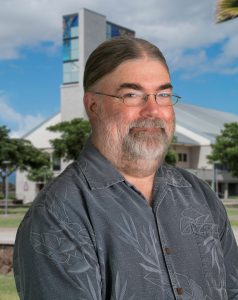 UH West Oʻahu Associate Professor of Science Education and Earth Sciences Richard Jones is the new president-elect of the National Earth Science Teachers Association (NESTA), an organization that strives to provide leadership and support to teachers so that K-12 students receive a quality earth and space science education.

On May 1, 2018 NESTA welcomed Dr. Jones as president-elect with plans for Jones to become president of the organization in 2020, and past-president in 2022. Jones has been a member of NESTA for several decades and has served on its board of directors since 2006.  Most recently he was an appointed director of the group and served as awards co-chair.

“We look forward to having as part of our executive board where he his long advocacy for the earth sciences, teachers of the earth sciences and their students will help to strengthen our organization,”  commented Dr. Carla McAuliffe, NESTA Executive Director.

NESTA leaders also are called upon as a nationally-recognized voice about earth science education.

Jones brings over 30 years of classroom experience as an earth science teacher and as a teacher of educators who teach earth science to his new role. He will continue to teach courses in earth sciences, including geology, meteorology, and oceanography as well as teach future science educators at UH West Oʻahu in addition to his responsibilities as NESTA president-elect.