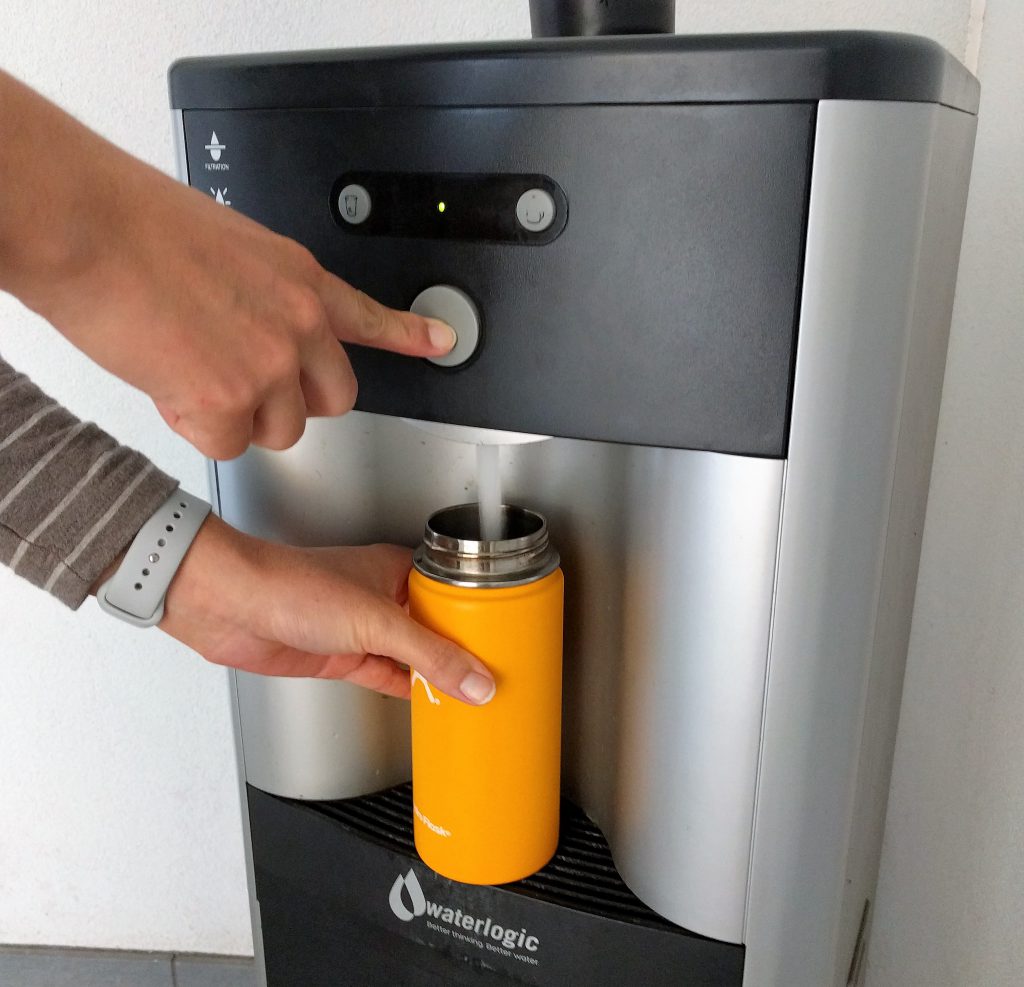 The Green Tracker water filling station in the E Building

Almost $115,000 has been saved by UH West Oʻahu students, faculty, and others in the three years since a hydration station was installed on the ground floor of the E building.

It’s also estimated the dispenser has kept close to a ton and a half of plastic containers out of Hawaiʻi’s environment and limited landfill space and saved users $113,837.

The Green Tracker triple-filtered dispenser was installed on July 30, 2014 and was funded through an Office of Naval Research Grant as part of the University’s establishment of a STEM center. Waterlogic, the manufacturer of the dispenser, notes there are multiple savings achieved through its products, including less energy expended making water bottles, reduced carbon footprint, less space needed for storage of plastic bottles, and lower landfill costs for governments.

Dr. Richard Jones, an Associate Professor of Education, wrote the grant that allowed the purchase of the machine and filters. He said the $1,400 machine exceeded expectations in the water dispensed and savings produced.  Besides applying obtaining the grant, Jones also maintains the dispenser, emptying its drip tray three times a day, replacing filters every 3,000 gallons and monitoring its output.

He also keeps data on the machine, almost four years worth, which he says helped the UH West Oʻahu campus decide on installing other water-filling stations elsewhere on campus over a year ago. The Elkay quick-fill hydration stations have helped avoid at least 66,797 plastic bottles entering the waste stream, according to electronic counters on the face of the dispensers.

As of Thursday afternoon, a filtered-water station on the Library’s ground floor had filled the equivalent of 30,147 plastic bottles, while a ground-floor station on the ground floor of Campus Center was at 19,747 bottles. A similar station on D Building’s second floor had helped avoid the use of 16,903 plastic bottles. Adding these to the over 76,000 from the Green Tracker Filling Station in the E-Building, UH West Oʻahu has prevent the equivalent of over 140,000 plastic drinking bottle out of our ʻōpala,  keeping to our commitment of sustainability and environmental stewardship.