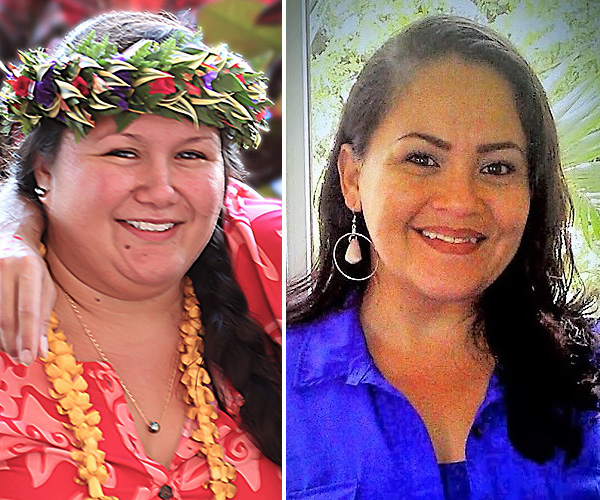 The program includes undergraduate research training and experience with faculty mentors, specialized academic and financial aid advising, travel and preparation for graduate.  Both Paishon and Farias attended a BUILD EXITO orientation in June at Portland State University, which holds the $24 million NIH grant for the program, but works with community colleges and universities, including University of Hawaiʻi on the project.

“It was a week for orientation, but what they taught us and exposed us to was nothing like I experienced before,” said Farias, a Sacred Hearts Academy graduate. “It was usually an all-day event from 8 a.m. to 6 p.m. and not a minute was wasted.”

Paishon and Farias made their own presentation during the orientation, which included a Hawaiian genealogy chant, a talk about the multiethnic nature of Hawaiʻi, and a mahalo oli.

“They did well,” said UH Mānoa Professor Kathryn Braun, who, as director of the UHM Office of Public Health Studies.“Both spoke from the heart about their passion to improve the health of Native Hawaiians ,” Braun said.

Braun is a co-investigator on the grant along with Dr. Keawe Kaholokula, John A. Burns School of Medicine, Professor and Chair of Native Hawaiian Health.  She said each of the Hawaiʻi cohorts has had an average of 10 students, most of whom are native Hawaiians.

Paishon said participation in BUILD EXITO will help hone her research skills and prepare her for a career in health sciences.  Paishon, a graduate of Kamehameha Schools, said she hopes to one day research ways to reduce health disparities experienced by the Native Hawaiian community so she can be of assistance in healing the Lāhui (nation).

Paishon and Farias were urged to apply for the program by Puʻu Zablan, a UH West Oʻahu PIKO Advisor and Junior Specialist.  Farias said she knew it would be a great learning experience because the program was based on health research and because of her educational background and interest.

Both Farias and Paishon will take a three-credits at UH Mānoa, Public Health 499 – EXITO Research and Practice Gateway Course in preparation for conducting research next summer. Braun said most of the BUILD EXITO students have done research under the tutelage of UH professors.  Past areas of research have included medicinal properties of la’au (plants), ways to reduce tobacco dependence, and linguistics related to health issues.

Braun said Portland State’s grant runs for five years, after which it is hoped it will be renewed.