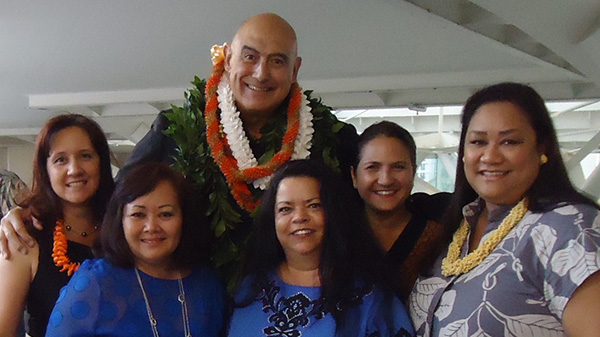 The University of Hawaiʻi Foundation is accepting donations for the Dr. Rockne C. Freitas Scholarship Endowment, which will support full scholarships with a preference given to Native Hawaiian students. More information on how to make a gift to the fund can be found here: https://www.uhfoundation.org/giving-opportunity/dr-rockne-c-freitas-scholarship-uhwo

Dr. Freitas had a diverse and productive career, first as an offensive tackle in the National Football League and then as a leader for the University of Hawaiʻi.  He also was a pioneer in both endeavors, becoming the first Native Hawaiian to make all-Pro in the NFL, then as the first permanent Native Hawaiian Chancellor at a four year-university when he began as chancellor of UH West Oʻahu in May 2013.

In all, Freitas worked in various positions for the University of Hawaiʻi System for 23 years and retired in 2015. During that time he was in critical roles,  serving as UH System vice president for student affairs and university/community relations, and as chancellor of Hawaiʻi Community College and UH West Oʻahu.  Freitas also held posts as vice president for university relations for the UH system and associate athletic director for UH Mānoa.

Freitas worked on key special projects, including the development of the new Hawaiʻi Community College Pālamanui Campus and Hawaiʻi Papa O Ke Ao, a plan for the University of Hawaiʻi to become the model indigenous-serving higher education institution in the state and the nation. He led the planning and overall effort to guide UH Mānoa’s athletics programs into the Mountain West Conference and Big West Conference.

Freitas holds an EdD and MEd in education from UH Mānoa and BS in animal science from Oregon State University. He also served as vice president and executive director of the Ke Aliʻi Pauahi Foundation and has held leadership positions at Kamehameha Schools and GRG Enterprises.

Recently the UH Foundation has worked on a number of endowments and scholarships created to support UH West Oʻahu students.  These include: