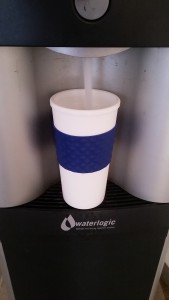 The Green Tracker Water Filling Station has passed another milestone with over 1,500 pounds of carbon reduced by using re-fillable water bottles on the UH West Oʻahu campus. The water station has also kept over 1,315 pounds of plastic out of our local landfill. Since the filling station first came to the University in the summer of 2014, student, faculty and staff usage has averaged 12.6 gallons of water consumed per day.

Fill up your bottle with refreshing filtered water (cold or hot) at the filling station on the first floor of the Laboratory Building across from the E132 classroom! The UHWO Green Tracker Water Filling Station was funded by the Office of Naval Research Grant as part of the University’s establishment of a STEM Center of Excellence. For more information, read the news release.