Explore the impacts of war on material culture, cultural sites, and identity in “The Peoples’ Persistence: Impacts of WWI Around the Globe,” a newly-launched online exhibit created by students at the University of Hawaiʻi–West Oʻahu.

Throughout the spring semester, with the direction of their instructor Dr. Christy Mello, Assistant Professor of Applied Cultural Anthropology at UH West Oʻahu, the students used a multimedia digital platform to create an interactive online museum exhibit exploring the topic of war and highlighting its various impacts, emphasizing the importance of cultural diversity.

As the semester progressed, students focused their exhibit on the untold stories of World War I and its impacts on people around the world. COVID-19 became a part of their story, connecting the lives of people today to the experiences of those who lived during WWI and the 1918 Spanish Influenza pandemic. 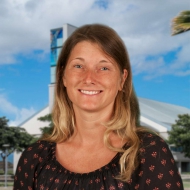 “Besides being visually breathtaking, it is directly relevant to today’s pandemic and related global issues,” Mello said.

The website features a collection of WWI informational posters from the Smithsonian Museum with a series of critical questions; photographs of artifacts from the Honolulu Museum of Art’s Lending Collection to celebrate diversity and illustrate everyday life, disrupted by war and disease; and students’ creative works, including a video, posters, and personal narrative.

“They pulled from their own experiences to connect with those who lived a century ago facing the same uncertainties, while asking critical questions about how we live in relation to others and our planet,” Mello said.

Ultimately, the exhibit encourages viewers to reflect on resiliency and how to come together during times of crisis for creating a better tomorrow.

The making of the exhibit

The inspiration for “The Peoples’ Persistence” online exhibit came from the materials made available to the students and current events, Mello said.

“Carina Chernisky, our Social Sciences liaison (and Public Services Librarian at the James & Abigail Campbell Library), made a couple of sets of posters from the Smithsonian available to my students while also putting me in touch with the Honolulu Museum of Art (HMoA) lending collections around the same time,” Mello recalled. “During the news at the time, January 2020, U.S. leadership had threatened to destroy cultural sites in Iran. I gave students the broad topic of the impact of war on cultural identity and sites.”

The students were tasked to come up with a theme and exhibit based on this topic and available collections, the posters, and whichever artifacts they chose after visiting the HMoA.

“I provided them with a series of questions for conceptualizing the exhibit and creating a cohesive story reflecting ethical considerations taught in class,” she said. “From there, they identified the Smithsonian WWI Legacies and Lessons posters focused mainly on uncommon stories from the U.S.”

To make the artifacts relevant, the students chose regions of the world not commonly shared about from a Western retelling of WWI and designed corresponding posters. From photographs they had taken, they decided to select artifacts representing daily life for celebrating diversity and the human experience.

And then, COVID-19 came to dominate the headlines, Mello said. Students were assigned to create a poster on the 1918 Spanish Influenza, which essentially ended WWI. They eagerly incorporated today’s pandemic into the exhibit.

“Our exhibit was going to originally be in person with a corresponding website,” Mello said. “With the social distancing changes put into place, we quickly transitioned into doing a fully online exhibit.”

Discussions and work on the exhibit became cathartic in that it provided students with an opportunity to express what they were feeling, while also creating a product as an instrument for creating change in asking critical questions about our future to viewers, she said.

“The process was more important than the product, though the product came out beautiful,” Mello said. “I am so proud of my students for working so hard this semester while engaging in deep and meaningful classroom discussion, and demonstrating what it means to be resilient.”

A screenshot of the homepage of “The Peoples’ Persistence” online exhibit.

Students’ ‘hard work and love’ put into this project

The exhibit was created by students from two of Mello’s classes, her ANTH/CM 378 Visual Depictions of the Human Experience and Media Power in-person class and ANTH 383 Museum Studies online class.

“A total of 42 in-person and online students collaborated with the use of a Google Site and by each volunteering for one task,” Mello said. “In each doing one task, they collectively created this website.”

Christopher Mitchell, one of Mello’s students, said working on the project “was truly amazing.”

“I learned about cultures from previous generations and how they went through some serious, tough times,” said Mitchell, an education major. “I believe we can compare our past problems to the issues we are facing currently because it may be rough right now, but if we come together and support each other, we can persist through anything.”

Groups of students worked on different jobs, such as research, context, website build, and poster creation, explained Stacy A. Manettas, another one of Mello’s students.

“The more we researched and learned about the artifacts and the communities they belonged to, the more we realized why it was called a ‘World War’ – it affected the whole world over, many different regions of the world were forever changed by these events, not just those countries that are commonly mentioned in our history books,” Manettas said.

The students were excited and proud to get to share the lesser-known stories behind this world-altering war, she said.

“Coincidentally, another pandemic was threatening the world during WWI, the Spanish Influenza,” Manettas said. “We couldn’t help but reflect on the similarity of the situation, so we made it a point to incorporate this into our exhibit.”

“Everyone worked so hard on their parts, some of us working beyond the last day of the semester to make sure that the exhibit was perfect,” noted Manettas, who graduated this semester with a Bachelor of Arts in Social Sciences, with a focus on Anthropology and certificate in Applied Forensic Anthropology.

Manettas said she is proud to have been a part of this project.

“It was a great learning experience, in so many ways, and I can’t say enough about all the hard work and love that my fellow students put into this exhibit,” she said. “ … It is definitely one of the biggest highlights of my time at UH West Oʻahu. I hope everyone enjoys the site as much as we enjoyed making it.”