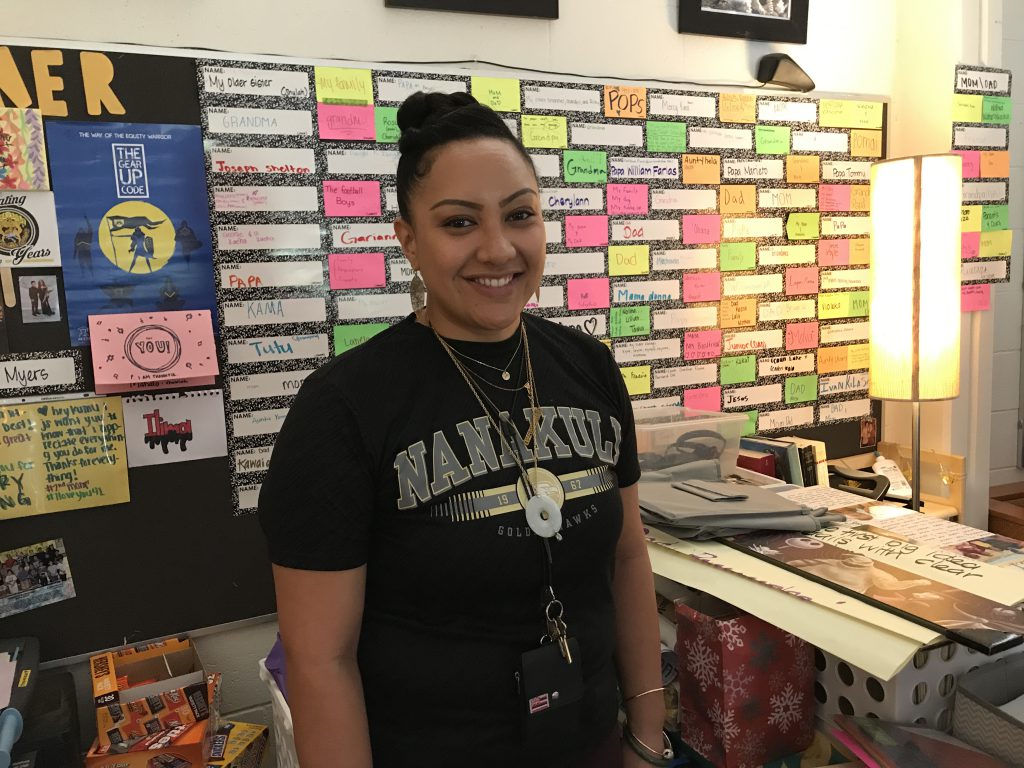 As Naturalee ʻIlima Puou speaks at the start of her English Language Arts class to more than two dozen high school freshmen, she easily holds the attention of her young students.

The ELA class, held earlier this month at Nānākuli High & Intermediate School, was quiet, allowing Puou’s voice to resonate throughout the room. She explains to the students they’ll be doing a peer-editing activity. She goes over what she expects of them and emphasizes the assignment is an important part of their quarter three final.

“You guys understand?” asks Kumu ʻIlima, as she is known on campus.

“Yes, kumu,” the teens respectfully reply, with all their eyes fixed on Puou.

Throughout the hour-long class, Puou checks on each and every one of her students, clearly determined to help them do their best: “Anything I can help you with?” “Are you OK?” “Did you get a chance to ask me your question?”

Puou’s commitment to her students and their successes, big and small, is clear. It’s among the reasons she received the National Milken Educators of Hawaiʻi’s annual Teacher of Promise Award. Puou, a University of Hawaiʻi-West Oʻahu graduate, was the winner for the Nānākuli-Waiʻanae Complex Area. She joins six other complex area winners and one state winner. 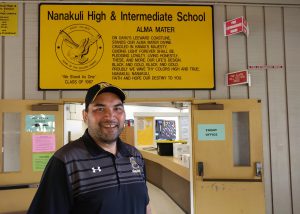 “Kumu ʻIlima upholds what the award is all about, a promising teacher who will do great things for her students, the education profession, and our community,” said Darin Pilialoha, principal at NHIS – and fellow UH West Oʻahu alum.

“Being in the system is her way of making a positive impact on the young lives and the future of our community,” he said.

Puou, 32, born and raised in Nānākuli, started her job as a ninth grade ELA teacher of 170 students at NHIS just last year.

She graduated from UH West Oʻahu in the fall of 2018 with a bachelor’s degree in secondary education/English. But her path to success wasn’t without its struggles.

Puou was raised by her mother, a single parent, in a low-income household. After graduating from NHIS in 2006, she intermittently attended Leeward Community College between 2007 and 2012, she said.

“For a long time, it was just my mother and I, and I was the sole income in the household,” Puou said. “I would always have to drop out of school to work.”

By 2013, she finally dropped out of LCC “to just focus on my family and take care of my home,” she said.

As Puou continues her story, she pauses, her voice shaking: “2014, my mom gets diagnosed with cancer and she died by 2015.”

Her mother’s death was a turning point in her life. Puou was driven to go back to school.

“A lot of my life had revolved around her and taking care of her,” Puou recalled. “And so after that, there was no more excuses.”

After her mother passed away in April 2015, she applied to UH West Oʻahu and started her first semester by fall 2015 to pursue a degree in secondary education.

“It appealed to me to be able to say that I had been 100 percent West-side educated,” Puou said. 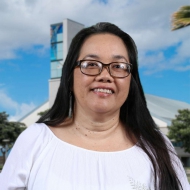 During her time at UH West Oʻahu, Puou said her main mentor was Cathy Ikeda, Assistant Professor of Middle Level and Secondary English with the Education Department.

“She basically showed me that everything that I had in my head, as far as the kind of educator I wanted to be, she showed me that it was possible,” said Puou, who prides herself on being an educated Hawaiian woman.

Puou said she was also guided by several other teachers and mentors, including Stephanie Kamai, Associate Specialist and Placement Coordinator with the Education Department, and Brenda Machosky, English Professor with the Humanities Department.

“What I appreciate about them collectively is that they saw me and they saw everything about me as an asset,” Puou said. “They really allowed me to maintain my own identity throughout my entire program of study.”

Ikeda recalled first meeting Puou when Puou was a student in her Intro to Teaching (EDEF 200/201) class in fall 2015 – the first semester at UH West Oʻahu for both of them.

“As a non-traditional student, she faced many challenges, however, as I got to know her that semester, I understood that she carries a strong sense of kuleana for her community,” Ikeda said.

She has always been the kind of student teacher that sees her students as valued and valuable, Ikeda said.

“I tell my students that as teachers, we must all see our keiki as ʻono, and in observing her in the classroom, she demonstrates that kind of love for her students that is ʻono/ delicious,” Ikeda said. “She works hard to engage them and be a role model to teach the students at her own alma mater.”

“Since many of our students at UH West Oʻahu come to us with that kind of kuleana and passion, we have tried to do whatever we could to use our partnerships like the Hawaiʻi Department of Education, as well as other partners like the Campbell Foundation, to find mentor teachers as well as advocate for our students like Nat (Naturalee) so that they can continue on their educational journey and thrive in their communities when they leave us,” Ikeda said. 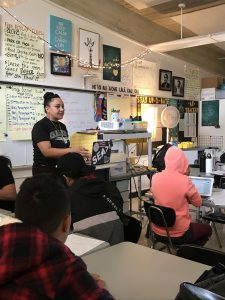 Back in Puou’s classroom, her students are focused. The room’s setting lends itself to a welcoming learning environment: a cool, dimmed space with strings of lights hung along walls covered with posters and messages like, “Readers Make Great Leaders” and “He ʻio au ʻaʻohe lālā kau ʻole,” an ʻōlelo noʻeau that translates into, “I am a hawk. There is no branch I cannot stand upon.” (The school’s mascot is the golden hawk.)

As the class winds down, Puou hands out candy bars, chips, and other snacks to select students as a reward for reaching their reading goals and participating in the school’s song festival.

“Good job on your reading,” she tells them. “Thank you.”

“You guys sounded fabulous,” she continues. “It was beautiful.”

“Thank you, kumu,” the teens reply, clearly grateful for the afternoon treats.

The gratitude is mutual.

The students in Puou’s ELA class are much like the many high school students – also from her community – she mentored years ago in a summer program. Those students who she worked with for two months over a period of about five years inspired her to become a teacher.

“I started off as a mentor, realized that I loved what I did, and wanted to make it more sustainable, so it just made more sense to pursue teaching,”  Puou said.

Puou said she enjoys that her job is in her community. Her home.

“I love that when I come to work, my students recognize me and they see me. And what I mean by that is they know I’m from here,” Puou said. “They know I’m somebody who made the decision to come back to make sure that everybody else has a chance of getting to where they want to.”

And while she’s grateful for being named a Teacher of Promise, the real honor of the profession comes from her students.

“When I hear my own words coming out of my students’ mouths or when I see them practicing things that I insist upon them doing, I donʻt need an award,” Puou said.