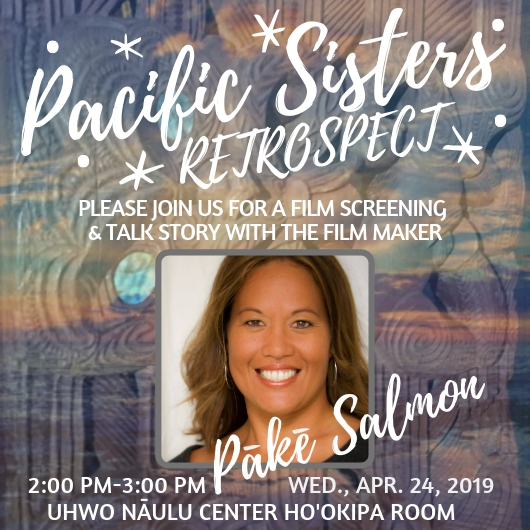 Film maker, actor, photographer, surfer, environmentalist and artist Chaunnel “Pākē” Salmon will screen her short film, “The Pacific Sisters Retrospect” and discuss the making of the documentary during a visit to UH West Oʻahu.

Salmon, who operates Mākaha Angels Productions,  is scheduled to make her presentation from 2 to 3 p.m., Wednesday, April 24, in Nāulu Center’s Hoʻokipa Room. She will be giving a talk titled “Pacific Sisters Retrospect,” that traces her work on the documentary shot last year in Aotearoa, New Zealand.

The film is a record of a milestone moment for The Pacific Sisters, a Pacific Islander art collective with roots in New Zealand. The artfully shot short documents the group being honored at the Te Papa Museum, a night-time private event that was attended by New Zealand Prime Minister Jacinda Arden. The seven-minute documentary also intersperses interviews with the women who make up the collective, along with some of the preparations and art processes for the event. 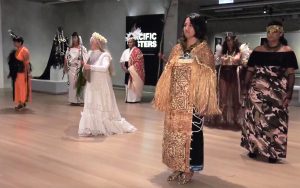 A scene from “Pacific Sisters”

Salmon said she was invited, as a Native Hawaiian filmmaker/photographer, to capture the event and co-collaborate to create new imagery.  She came away impressed by the group of fashion activists that take Pacific Island fashions from ancient times and contemporize them to create new works.

Salmon was born and raised in Mākaha and has, according to her biography, spoken at Environmental Protection agency conferences, given presentations at national conferences for the Waiʻanae Coastline community, and was an ambassador for 50 States United for Clean Healthy Air with Earthjustice.  She was also invited to give a speech at the White House to former EPA Administrator Lisa Jackson.

She worked in Hawaiʻi’s film industry doing surf stunt work, driving boats and jet skis for Baywatch Hawaiʻi, and made appearances as an actress in the Hollywood Film & Television Industry. She was last seen in the comedy Forgetting Sarah Marshall.  She also has worked as an underwater photographer/videographer, built a destination wedding business, and has done fashion and commercial photography. She has worked with major Hollywood Studios & networks including Universal, Disney, Paramount Pictures, NBC, ABC to name a few. She has created imagery with celebrities such as legendary Musician Neil Young, Actress Darryl Hannah, and Hawaii’s own Jason Momoa.

The presentation at UH West Oʻahu will also include a short piece about Salmon’s film & career journey and other projects she is working on. Salmon said the short film should give students the inspiration to follow their dreams and passions.