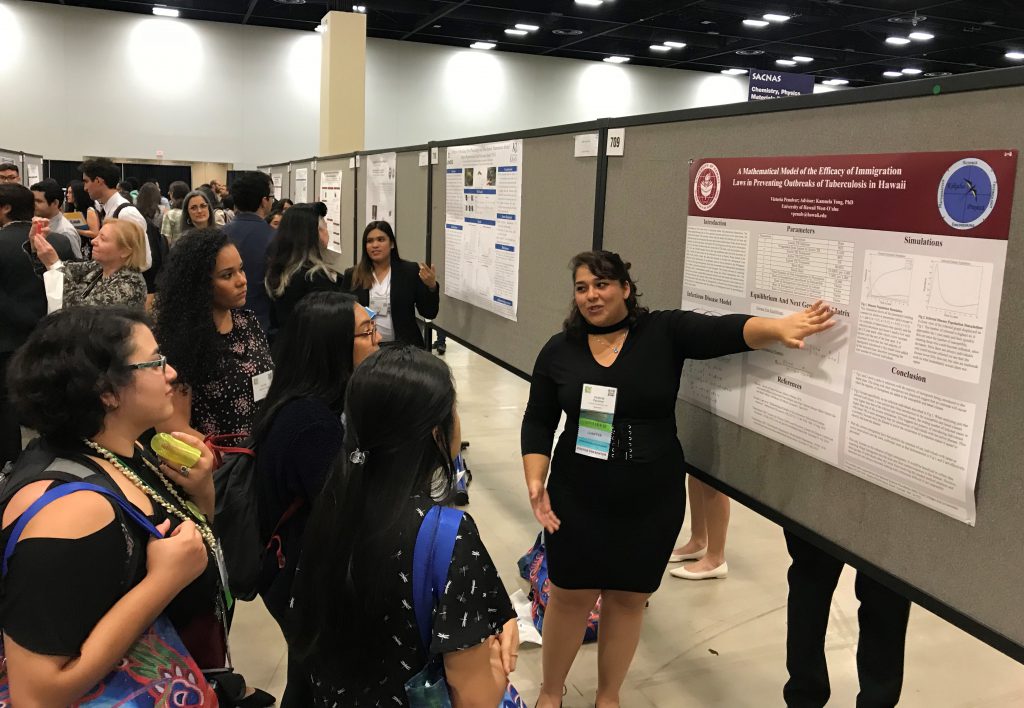 Penalver presents a poster at a SACNAS event last fall in San Antonio.

Penalver presented a poster titled “A mathematical model of the efficacy of immigration laws preventing outbreaks of tuberculosis in Hawaiʻi” based on undergraduate research she had done last summer at UH West Oʻahu. Penalver’s research was supported by a grant through the Kikaha Undergraduate Research Project.

The Mathematical Association of America provides a forum for educators, students, professionals and others to share ideas and keep abreast of developments in the mathematical community. Penalver presented her poster at the association’s section meeting April 6 on the campus of California State University, Channel Islands. 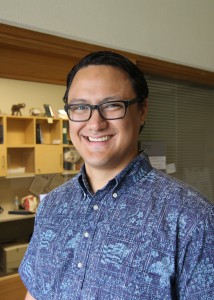 Penalver’s poster was the result of work she did in the summer of 2018 when she worked with, another Kikaha-supported student, Erin Takamatsu, and was mentored by UH West Oʻahu Assistant Professor of Mathematics Dr. Kamuela Yong to learn the mechanics behind mathematical modeling. Penalver modeled the effects of immigration on the spread of tuberculosis and developed a differential equation model and ran simulations to determine the effects of certain conditions on an outbreak.

Penalver, a Makakilo resident, is a 2016 graduate of Kamehameha Schools Kapālama Campus who arrived at UH West Oʻahu only expecting to take Math 103: College Algebra.  Yong said Penlaver instead realized she had a passion for math and has taken eight math courses since Fall 2017.

“I find this fascinating that a student who was originally planning to take one semester of college algebra discovered her calling in math and is excelling and doing all these projects,” Yong wrote in an email.

Penalver also used her research from last summer to develop a poster presented last fall at a Society for Advancement of Chicano/Hispanics and Native Americans in Science (SACNAS) meeting. Her travel to California was supported by UH West Oʻahu’s Nālimakui Council, a Native Hawaiian group providing an independent voice and organization as it relates to Native Hawaiian programs, activities, initiatives, and issues.

The sophomore also did a research project with Associate Professor of Mathematics Dr. Esther Widiasih during Winter break last year.

Penalver plans to continue her research in applied mathematics by attending the summer research experience for undergraduate program Mathematical and Theoretical Biology Institute at Arizona State University, which has been recognized by the White House in 2011 with the Presidential Award for Excellence in Science, Mathematics and Engineering Mentoring.