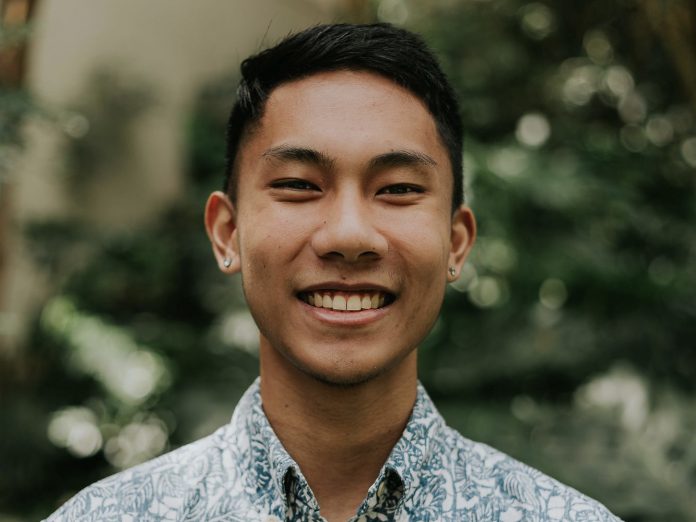 University of Hawaiʻi–West Oʻahu senior Noah Isaiah Tadena and his family are days away from a milestone.

Tadena, who is majoring in Business Administration with a concentration in Hospitality and Tourism, said his upcoming graduation “means a whole lot” to him because he will be the first in his family to receive a four-year college degree.

“I say ‘four year’ because my mom earned her associates degree,” noted the Royal Kunia resident, 23. “Hopefully this inspires my little sister to graduate as well.”

This fall 2021 semester, Tadena is among more than 300 students who are candidates for graduation, about half of whom will be participating in modified, in-person ceremonies on Saturday, Dec. 11, on campus at UH West Oʻahu.

The fall 2021 commencement is UH West Oʻahu’s first in-person commencement since fall 2019. It features two ceremonies: The morning ceremony starts at 9 a.m. for Business Administration and Applied Science candidates. The afternoon ceremony begins at 1 p.m. for Creative Media, Cybersecurity, Education, Humanities, Natural Science, Public Administration, and Social Sciences candidates. Candidates are allowed two guests each. (The events are only open to students and guests who already registered.) All attendees must be fully vaccinated and wear face masks throughout the ceremony.

While Tadena will not be participating in the in-person ceremony, he — along with all candidates for graduation this semester — are being celebrated and honored by UH West Oʻahu for all of their accomplishments.

“Noah Tadena is one of our shining stars at UH West Oʻahu,” said Dr. Holly Itoga, assistant professor of Hospitality and Tourism. … “He represents everything that a hardworking local student can accomplish when they stay focused on their path to success and do their best — for himself and his family.”

A future in hospitality

With Itoga’s encouragement and recommendation, Tadena applied for and was accepted into Hawaiʻi Lodging & Tourism Association’s prestigious Generational Mentoring program, which Tadena considers one of his most notable achievements as a UH West Oʻahu student.

Tadena was one of 19 students statewide who was selected for the program, which partners participants with a mentor and leader in the hospitality and tourism industry. The program started in November and runs through April.

In a recommendation that Itoga wrote to HLTA, she said what is most impressive about Tadena has been his relationship with his classmates.

“He is truly charismatic and his classmates look to him as a leader whose opinion they trust,” she said. “He once did a presentation on ‘How to Win Friends and Influence People,’ and it motivated every classmate to buy the book!”

“I will have the opportunity to tour the property, learn how certain departments function in the hotel, gain insight to how Kimberly thinks and manages, and I get to share my knowledge with her as well,” Tadena said.

The mentorship program is a great opportunity for Tadena, whose post-graduation goal is to work within the hospitality industry, specifically in hotels.

Tadena added, “All the professors I have had at UH West Oʻahu have been so supportive and I just want to continue that support to help others grow and succeed.”

‘Live in the moment’

His time at UH West Oʻahu came with its challenges.

Tadena also recently lost an uncle (not related to COVID), his dad’s brother, and his family traveled to San Diego for the memorial service.

“I was unable to attend because of school, work, and internships,” he said. “I was upset that I couldn’t be there for my family, especially my dad, but they were understanding because they knew I would be graduating soon.”

Tadena’s dedication and persistence as a student helped him to get through such difficulties and to stay on track.

Now, with commencement around the corner, he offers advice to others who will be graduating in semesters to come.

“Graduate at your own pace,” Tadena said. “Don’t take six classes in one semester  because that is what your friends are doing or don’t pressure yourself and think you have to graduate in four years.”

Tadena said graduating a semester later than planned to spread out his classes was the best decision he made.

“I wasn’t really cramming or stressing during finals week and I had more time for leisure and work,” he said. “Also, I encourage everyone to get out of their comfort zone, meet new people, and join clubs or school activities.”

He said he regrets not being able to do that.

“The first two semesters (at UH West Oʻahu), I really kept to myself and when the pandemic hit, I didn’t have those same opportunities,” he said. “Time is going to fly by, so I suggest you live in the moment and be adventurous!”

The University of Hawaiʻi–West Oʻahu accounting program received from the Association of Government Accountants (AGA) Hawaiʻi a $25,000 endowment — the second gift from...
Read more
Pueo People

Emma Lake's time at the University of Hawaiʻi–West Oʻahu has been bookended by notable achievements — from receiving a Regents Scholarship as an incoming...
Read more
Class Act