The Nāulu Center will unveil a large mural drawn from the epic moʻolelo (story) of HiʻiakaikapolioPele and other moʻolelo of Honouliuli ahupuaʻa during a reception next week.

The 7-foot by 14-foot mural by artist Kupihea will be shown during the reception, which is scheduled from 6:30 to 8:30 p.m., Thursday, March 7 in the Nāulu Center. Desserts and ʻawa will be served. Reception will begin at 6:30 p.m. with the artist presenting at 7:00 p.m.; RSVP is to piko@hawaii.edu.  The mural will serve as the basis of cultural curriculum being developed along with an educational resource website. 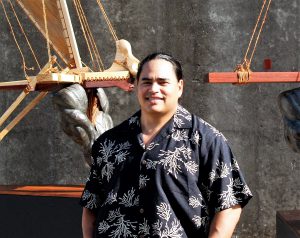 “He ala hele ‘uhola o Honouliuli,” or Unfolding Path of Honouliuli, is based on research by Kupihea and his wife, cultural anthropologist Kēhaulani Kupihea. The two researched mele and old Hawaiian newspapers, resulting in an eye-catching mural that also serves as the basis for cultural curriculum. Much of the colorful mural focuses on HiʻiakaikapolioPele, the younger sister of goddess Pele, on a journey that included travel through Honouliuli, the ahupuaʻa where UH West Oʻahu is located.

Hiʻiaka’s saga is chronicled in various moʻolelo that describe her perilous trip from Hawaiʻi Island to Kauaʻi and back for Pele. People studying the mural will meet Hiʻiaka, the younger sister of goddess Pele, as she surveys Honouliuli from Pōhākea in the Waiʻanae Mountains and along with the places, natural scenes and wildlife found her on travels through the ahupuaʻa.

Other scenes depicted along the unfolding path include a spring of Hoakalei in the vicinity of Kualakaʻi, Kaʻhupāhau – the shark guardian of Puʻuloa, kalo, pueo, the goddess Kānekuaʻana, Puʻuokapolei, Pele, mullet, and the night sky.

“The visual interpretation came from an in-depth look into some of the moʻolelo that are ingeniously tied into the cultural landscape of Honouliuli,” wrote Kupihea in materials that will be included in the curriculum. He first painted the mural on smaller canvases that were printed onto a larger wallpaper canvas.

“I paid special attention to HiʻiakaikapolioPele which contains a beautiful layering of information from atop the mountain pass of Pōhākea to the viewing station of Puʻuokapolei to the “iʻa hāmau leo o ʻEwa,” in Kaihuopalaʻai.”

The mural will also be used as a resource for teachers to use in classrooms when connecting to culture and places.  It will also be used for professional development for faculty and staff to help increase sense of belonging and deepen an understanding of  the history and stories surrounding the University of Hawaii – West Oahu campus.

The mural will be displayed in the Nāulu Center, which also has a kapa by artist Dalani Tanahy that also draws upon the stories and places of West Oʻahu. The center and artwork is funded by the PIKO Project, a Title III USDOE grant, that provides opportunities to students, faculty, and staff to learn and connect with places in West Oʻahu.

Want to know more? A translation of Hoʻoulumāhiehie’s moʻolelo, “The Epic Tale of Hiʻiakaikapoliopele,” by University of Hawaiʻi at Mānoa Prof. M. Puakea Nogelmeier, was published in 2006 and describes Hiʻiaka’s journey, including her visit to Honouliuli.