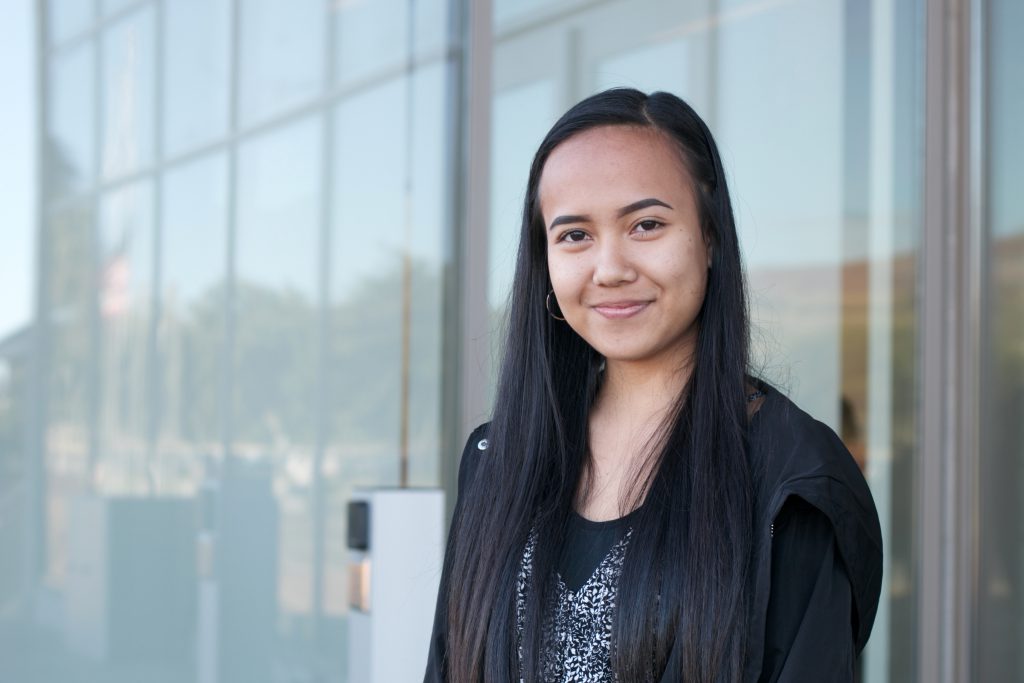 UH West Oʻahu junior Leanne Aira Villanueva remembers feeling forlorn as a fifth-grader, having gone from being a top-flight student at her school in the Philippines to being a troubled student at August Ahrens Elementary School.

“It was a shock for me,” said Villanueva of her move to a new country. Kids were different culturally than her small school in the Philippines. Although she knew English, it was spoken differently and she found herself in an English language learner program.

Worse yet, Villanueva’s academic performance suffered. After having been proud of her status as one of the top five performing students at her old school in Ilocos Sur, she was in a lower-performing rung at the elementary school in Waipahu.

“It took awhile for me to adjust,” said Villanueva,  now 19, and a so-called “Academic Olympian,” or someone who earned an associate degree just prior to graduating from high school. But at the ripe age of 11, Villanueva was struggling.

“I felt really helpless and I didn’t want to be in that position anymore.” Determined to succeed, Villanueva approached teachers for tutoring and put in time after school learning to overcome her difficulties. 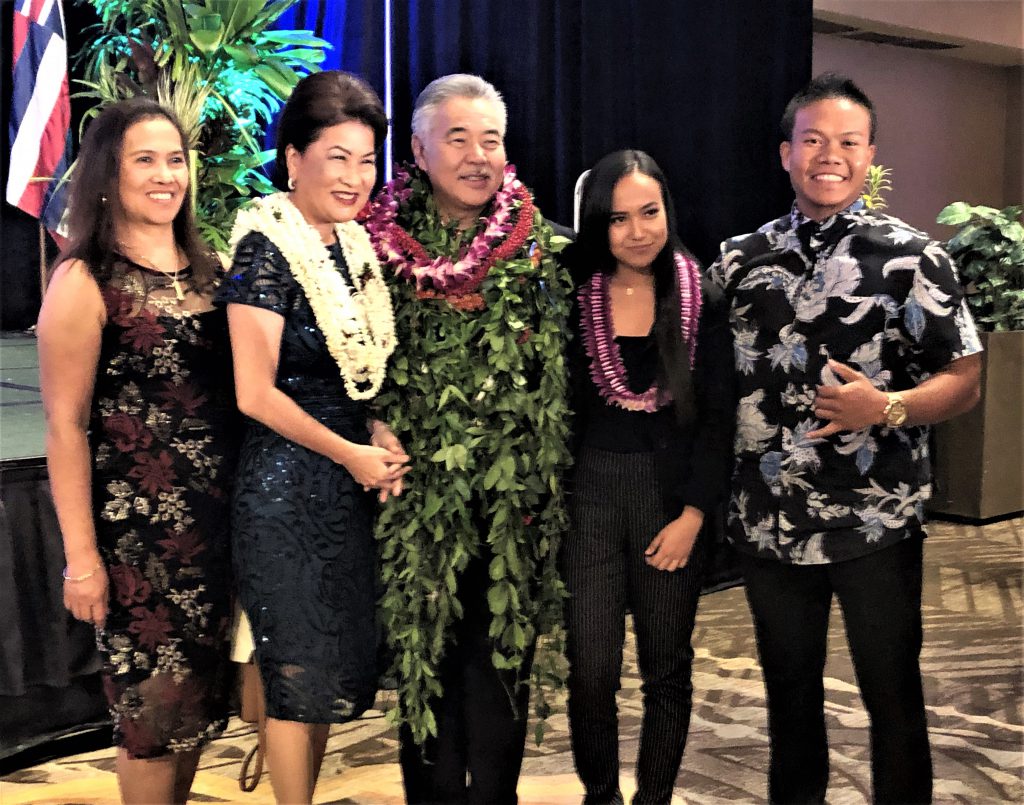 Flash forward to earlier this year, when her story caught the eye of Hawaiʻi Gov. David Ige, who posted a picture of himself and Villanueva on Facebook and remarked about her story.

“Despite being a young immigrant, Miss Villanueva worked hard to get to where she is today because she is determined to realize a successful future someday,” Ige noted in the April 2018 post.

“Miss Villanueva is yet to discover her career goal as she is still unsure of what she wants to become someday; although, she has keen interest in business. In the meantime, Miss Villanueva’s main goal is to graduate with an AA degree, as well as be valedictorian for the WHS Class of 2018.”

Indeed, Villanueva accomplished all of that: Associate of Arts degree from Leeward Community College? Check. Graduating as a Waipahu High School valedictorian with a 4.1 grade point average? Check. Acting on an interest in business? Check. (She is now studying business administration as a junior at UH West Oʻahu).

She said she had the second-highest GPA of Waipahu graduates and was happy to show her parents that their efforts had paid off. “They were very, very proud,  and I was very proud too, considering where I started.”

Villanueva credits her mother for instilling an appreciation for education, and that, plus her own desire to give back to the community and set an example for others, has contributed to her growth. But she also appears to possess an unyielding drive to achieve, maintains a positive outlook, puts long-term goals ahead of short-term distractions, and exhibits a mature-for-her-age ability to size up situations.

“My mom groomed me to value education,” said Villanueva, who hopes to graduate as valedictorian at UH West Oʻahu and give the student speech at commencement. “I really value education. I want to do well in school.”

Villanueva’s hard work at August Ahrens resulted in a series of breakthroughs. She put in hours of after-school work to exit the English language learner program and in the 6th grade was part of a team that won a school-wide science competition. “That was a huge accomplishment for me.” she said.

But the victory was short-lived when everyone else on the team was selected for a gifted and talented program in intermediate school. However, in typical fashion, Villanueva realized she could still make it on her own. Not making the program wasn’t the end of the world – she could still accomplish great things on her own.  She got straight A’s in the 7th and 8th grades.

Once in high school, Villanueva committed to an early college program after hearing Dr. Mark Silliman, Waipahu’s early college director, speak about it. Never mind that it involved taking college-level courses, or having to commute to Leeward Community College for some of the classes, or the extra work. Upon hearing about the opportunity to earn a college degree for no cost while in high school, Villanueva was sold. 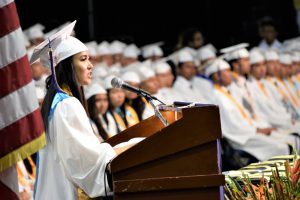 Villanueva giving a speech at Waipahu High School’s graduation at the Neal S. Blaisdell Center in May.

She is now one of several Academic Olympians on the UH West Oʻahu campus (Villanueva knows of two others from Waipahu High School, Jillian Panganiban and Sharmaine Allas) and is aware of Kureha Pambid, who is graduated from Waiʻanae High School).

“It really appealed to me,” she said, explaining worries about the early college program were erased when she realized she would have a good support system between other students in the program, Silliman, and others at Waipahu.  Still it was an arduous path to take – Villanueva found herself at school from 8 a.m. to 4 or 5 p.m. and having to do her high school class homework prior to college classes beginning later in the day. She learned to juggle her various activities (including membership in student clubs and being president of the Phi Theta Kappa Society).

“I had great teachers, great professors, who were always there to help.” She also credits Silliman, Waipahu Principal Keith Hayashi, Gov. David Ige for his support of early college programs, and the McInerny Foundation as contributing to her success. “Without them, I would not have been in the position I am today, and achieve what I was able to achieve.  My success is also their success.”

There were tough times, to be sure. Villanueva gave thought to dropping out of the early college program given the rigorous demands, but agreed with fellow students that it wasn’t worth throwing away all they had been through, or the opportunities and experiences that it offered. She recommends the program to others, in part of the opportunity to gain college credits at no cost, in part because of the experiences it offers.

Moreover, Villanueva cherishes the friendships with other early college students; and exposure to activities not available to regular high school kids such as trading arguments with college students in debate class, or exploring botanical areas in Honolulu as part of her classes. She views the pressure of having to do college-level work is viewed in a positive light — learning to deal with it will only help her in difficult situations in the future; she also grasped the value of time management and being able to deftly juggle various demands.

“If you’re really driven there’s nothing that will stop you from making the journey,” said Villanueva, who was awarded a Chancellor’s Scholarship at UH West Oʻahu. The scholarship is given to high-achieving high school graduates that acknowledges academic achievement, leadership , and community service. Villanueva was accepted at other schools in Hawaiʻi and on the Mainland, but said she chose the Kapolei campus for a number of factors, including its proximity to the family home in Waipahu and transportation concerns.  She also said UH West Oʻahu having a good business program, helped her make the decision.

Her achievements have brought her other perks as well. In early December, Villanueva got to speak on the early college program at Gov. Ige’s inaugural celebration at the Hilton Hawaiian Village. Among the people she met: Lt. Gov. Josh Green, and former Gov. Ben Cayetano. She also was the valedictorian speaker for Waipahu’s May 2018 graduation ceremonies at the Neal S. Blaisdell Arena in Honolulu.  She didn’t tell her parents ahead of time.

“They were surprised. My mom was crying,” said Villanueva, who hopes to one day support her parents — her mother works as a restaurant hostess in ʻAiea while her father is a houseman at a Waikīkī hotel. “My mom kept watching my video. She was a proud parent.”