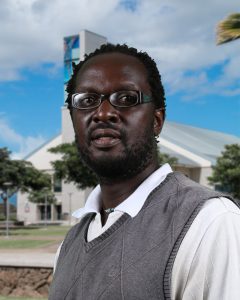 Dr. D. Nandi Odhiambo will have a Honolulu launch for his novel, Smells Like Stars, at 3 p.m.,  Thursday, Nov. 29 at the University of Hawaiʻi at Mānoa.

Odhiambo will read from the book, which Canadian literary publisher Book*hug published on Oct. 8, during the event, which is free and open to the public. Smells Like Stars tells the story of a journalist and her photographer fiance as they investigate the killings of horses in a town on an island in the middle of the Pacific. The story draws attention to what’s hidden in plain sight and that life can be without meaning, cruel and ambiguous.

Odhiambo recently participated as one of the writers appearing at the Toronto International Festival of Authors.  This included participating in a “Festival Pop-up” at Toronto’s Union Station that featured writers publicly reading from their works at the busiest commuter interchange in the city.

Odhiambo also was on a panel along with writers Melanie Raabe from Germany and Kirsten McDougall from New Zealand and had the opportunity to visit Sir Wilfrid Laurier Secondary School and Hillcrest High School to talk about writing.

“I thoroughly enjoyed my time getting to read and talk about my novel along with so many exceptional writers from around the globe,” said Odhiambo.  Smells Like Stars also received favorable reviews in World Literature Today, and Salon .ll., while Odhiambo was interviewed by Book*hug for its website.