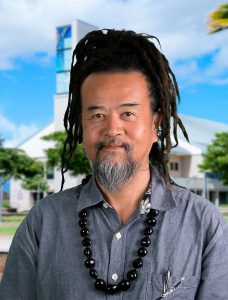 Two articles authored by UH West Oʻahu’s Masahide Kato — one an effort to use Native Hawaiian knowledge and cultural values in teaching at UH West Oʻahu and the other on Hawaiian Graffiti — have been published peer-reviewed journals.

Assistant Professor of Social Sciences/Political Science Kato’s article, “Community Resonance: Indigenous Epistemology and the Learning Community Program at the University of Hawaiʻi West Oʻahu,“ appeared in the Practices from the Field section of Learning Communities Research and Practice, an open-access, peer-reviewed journal published twice a year by the The National Resource Center for Learning Communities at The Evergreen State College.

Kato’s article reports on an effort in 2015 to increase retention of first-year West Side students at UH West Oʻahu by creating an indigenous culture-based learning community with the help of the PIKO Project, a program funded aimed at providing educational and service programs that integrating Hawaiian knowledge and cultural values with cultural engagement. With the help of Dr. Manulani Aluli Meyer, a program was designed to integrate Hawaiian knowledge and values into learning activities.

Kato explains that Hawaiian concepts such as ‘Auamo Kuleana (collective transformation through individual excellence), ʻĪke ʻĀina (the knowledge of the land) and Aloha ʻĀina (love of the land) were woven into the program, which was inclusive of both Native Hawaiian and non-Native Hawaiian students and faculty. Students participated in the classroom, placed-based service learning, and cultural activities.

The result was twofold: integrating indigenous epistemology in these situations resulted in a holistic learning environment, while it also connected diverse communities in an interdependent relationship through resonance of its foundational conceptions.  Together, the interdependence of diverse communities and learning activities formed through such resonance provided an opportunity for transformation.

Kato quotes one of the students on the program’s transformative effects: “In this class we all grew as individuals and came together with all of our ideas that we gained from the knowledge that were instilled in us. Together we learned that changes begin with us.”

The article came from research Kato did from 2006 to 2012, noting graffiti, interviewing the graffiti writers and also those opposed to the practice. The article attempts to capture the aesthetic and symbolic expressions of decolonization in the spray painted graffiti pieces by a crew primarily composed of Native Hawaiian writers. It also focuses on the indigenous aesthetic practice of kaona or the act of hiding or seeking meaning, analyzing contested issues of jurisdiction, sovereignty, property claims, and ecological integrity under prolonged colonial and military occupation.

Kato’s concludes fundamental kaona of the graffiti goes beyond notions of criminality and vandalism in that artists expose the illegality and invalidity of settler colonial and occupational power.

“The practice of kaona in Hawaiian style graffiti allows both writers and the community of audiences to connect with the ancestor’s (i.e. kiʻi pōhaku writers) path that had steadfastly perpetuated indigenous aesthetic and cultural practices against the emerging settler colonialism by transfiguring the symbol of colonial power (e.g. letters and fonts) into their own means of expression,” the article concludes.

“Thus, Hawaiian style graffiti can be seen as the futuristic act of interjecting the original understanding of Hawaiian law, sovereignty, ecology, and cultural values into the present to visualize and hopefully actualize the society in which life, aesthetic expression, and ecology are more valued than property.”

The articles are available online at the links included above. Kato said the articles will be uploaded to the James & Abigail Campbell Libraryʻs repository for faculty research, DSpace.