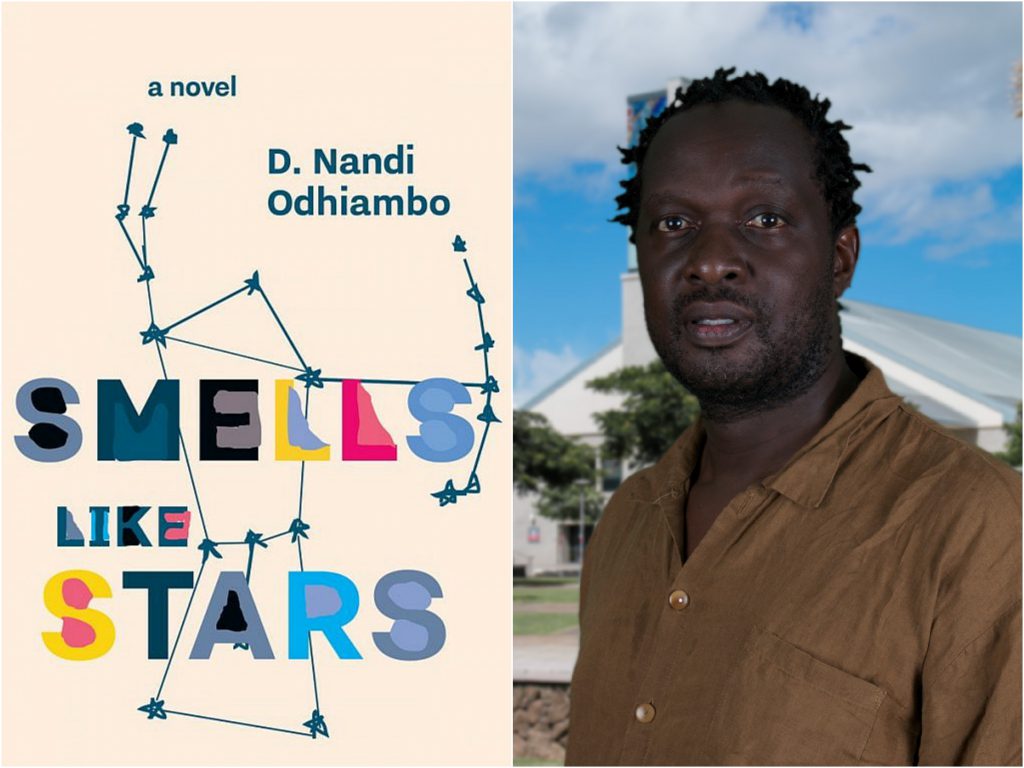 The cover of Smells Like Stars and its author, UHWO Assistant Professor of English, D. Nandi Odhiambo

Smells Like Stars, a novel by UH West Oʻahu Assistant Professor of English D. Nandi Odhiambo, has been included in the Canadian Broadcast Corporationʻs preview list of recommended fall fiction.

The book, which will be published on Oct. 8 by literary publisher Book*hug, was one of 24 works included on the list of promising Canadian works scheduled for the fall. The 220-page paperback is currently available for pre-order online and will be sold in bookstores in Canada and the United States when published.

The novel published by Book*hug, follows a journalist and her photographer fiance as they investigate the killings of horses in a town on Canadaʻs west coast. The novel is one of discovery, or as Book*hug’s synopsis states, “Ultimately, Smells Like Stars draws attention to what is hidden in plain sight, that life can be cruel, ambiguous and without meaning.”

Odhiambo says he wanted to write a novel that delves into the entangled link between the personal and the political as a contrast to major literatureʻs early modern emphasis on the individual as distinct from their social environment.

“Since language is limited in its capacity to represent the human experience, my intention was to do work that departs from the linguistically based model for the novel, and emphasizes interpretation in rendering a structure of experience that is elusive in its tangibility and inseparable from its interpenetration with its environment,” Odhiambo wrote in an email.

“Therefore, Smells Like Stars is inspired by a desire to write about the instability of meaning by exploring the impact of internal forces and affective relationships, repetition of habits, and chaos of perpetual change on characters with future oriented concerns.”

Smells Like Stars is the fourth novel by Odhiambo, who was born in Nairobi Kenya and moved to Winnipeg, Manitoba in the 1970s.  His first novel, diss/ed banded nations, was published in 1998 and followed by Kipligatʻs Chance in 2003. The Reverendʻs Apprentice was published in 2008.