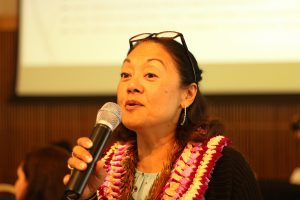 UH West Oʻahu Chancellor Maenette Benham will travel to Japan in June to explore potential partnerships with universities as part of a trip organized by TeamUp, a campaign to foster student exchange between the United States and Japan.

Benham will be one of five university administrators on the familiarization trip, during which the travelers will visit Tokyo, Osaka, Okayama, and Sendai to explore partnership opportunities with Japanese universities and colleges. Participants are expected to develop at least one relationship with a Japanese school during the trip, which is scheduled from June 19 to 28.

The TeamUp is a campaign funded by the U.S. Embassy in Tokyo and facilitated by the United States-Japan Bridging Foundation to increase the number of exchange students studying in each otherʻs countries. University of Hawaiʻi Maui College participated in a 2016 tour and entered into partnership within months of completing the trip, according to a TeamUp report.

“The TeamedUp Familiarization Tour enabled faster, deeper connections on both sides. Typically, partnerships require many meetings, trips and sometimes years to establish,” the TeamUp report said. “Within two months, Maui College signed an MOU with the University of the Ryukyus.”