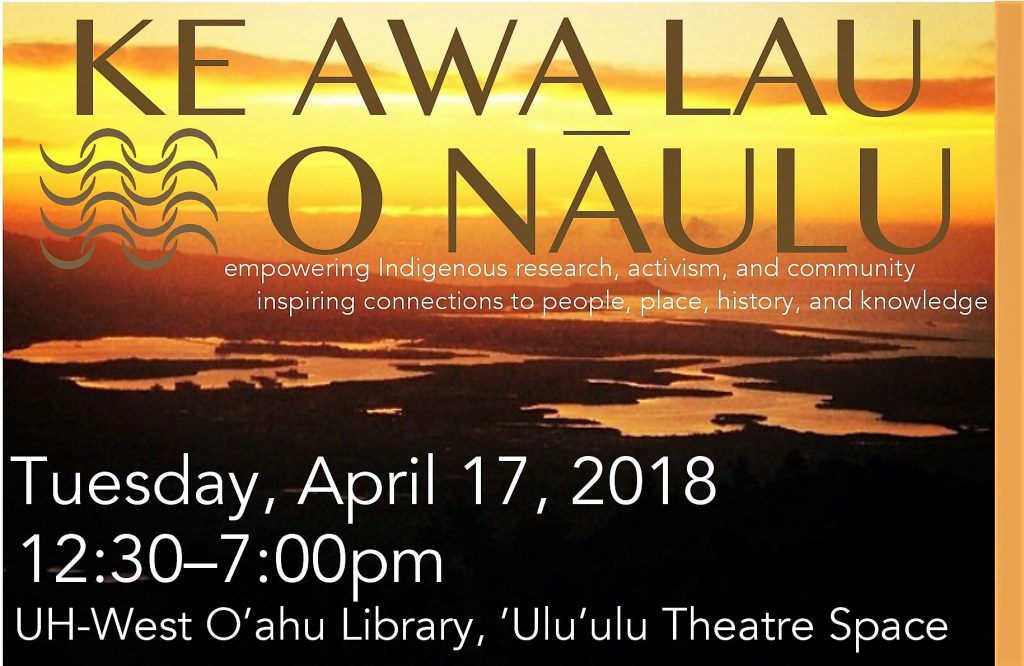 The inaugural Ke Awa Lau o Nāulu: A Hawaiian-Pacific Studies Symposium examining the works of Pacific Scholars, will be held next week in what is hoped to be the first of larger annual conferences attracting the foremost experts in Hawaiian and Pacific Studies.

The conference is scheduled from 12:30 to 7 p.m., April 17, in the ‘Uluʻulu Theater Space. With this symposium, the organizers hope to empower indigenous research, activism, and community. They also hope to inspire connections to people, place, history, and knowledge through the hosting of scholarly and creative presentations by academics, scholars, and the broader community. It is also hoped the conference provides a space for people to come together and engage with Hawaiian and Pacific Scholars, both local and international, whose research, work, and publications inform the fields of Hawaiian and Pacific Islands Studies.

The organizers believe the discussion of the histories of these remarkable Pacific people will bring a greater sense of pride in their heritage and can contribute to a greater desire to learn and obtain a higher education in the UH system.

“The name of the symposium–Ke Awa Lau o Nāulu–is specific to our  location in the moku of ’Ewa, bordering on the thousands of inlets and bays of ke awa lau o Pu’uloa. The name also is meant to include the thousands upon thousands of bodies of water that connect all of Oceania – its places, peoples, practices, and experiences,” according to event organizers.

“In addition to the waters that connect us, we also call upon the Nāulu wind and rain, that falls and blows from Kaʻala, connecting us to all of Oʻahu, across the pae ‘āina, and, again, across Oceania. We hope that, like the Nāulu,  this symposium will inspire continued change and growth in our teaching, in our research, and in our relationships with each other.” 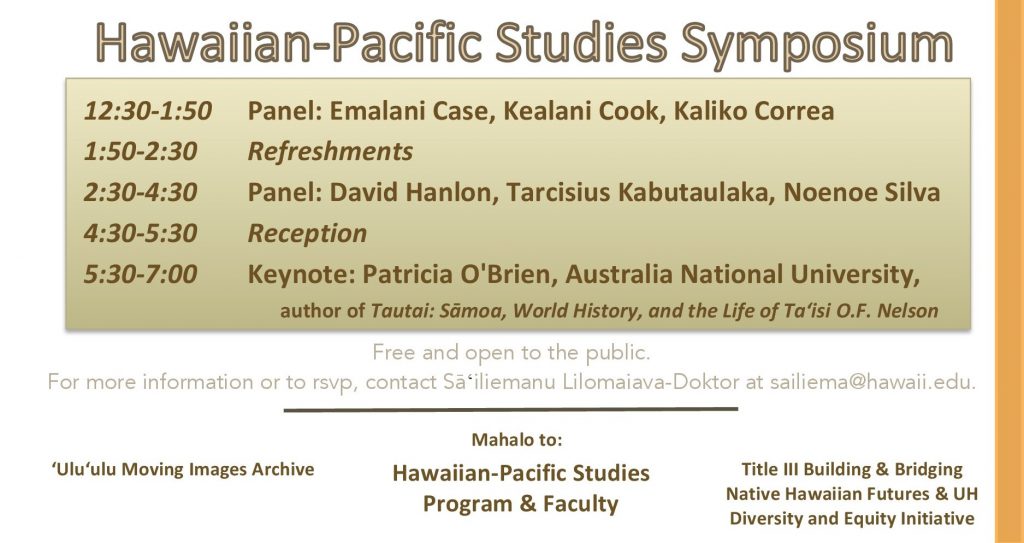 The event will feature a keynote address from Dr. Patricia O’Brien, a researcher at the Australian National University who is a cultural historian of colonialism, race relations, and indigenous histories within a broad arc of imperialism. O’Brien is the author of “Tautai: Samoa, World History and the Life of Taʻisi O.F. Nelson”, a biography published last year that chronicles the life of Sāmoa’s richest man and his fight against a colonial surge in the Pacific.

There also will be two panel discussions, the first of which will feature UH West Oʻahu faculty members – Drs. Emmalani Case, Kealani Cook, and Kalikolani Correa – discussing their research and work.

A second panel will consist of Dr. David Hanlon, a University of Hawaiʻi at Mānoa history professor; Dr. Noenoe Silva, a UHM professor in Department of Political Science, and Dr. Tarcisius Kabutaulaka of the Center for Pacific Islands Studies at UHM.

Hanlon is the author of “Making Micronesia: A Political Biography of Tosiwo Nakayama,” while Silva most recently authored “The Power of the Steel-tipped Pen: Reconstructing Native Hawaiian Intellectual History.” Kabutaulaka is the author of “Footprints in the Tasimauri Sea: A biography of Dominiko Alebua.”

The organizers’ goals are to feature scholarly works of academics in the field and provide a forum for our students, faculty. and community to come together through lectures and presentations delivered by the foremost Pacific Scholars both local and international whose research and books have been used in Hawaiian and Pacific Islands Studies.