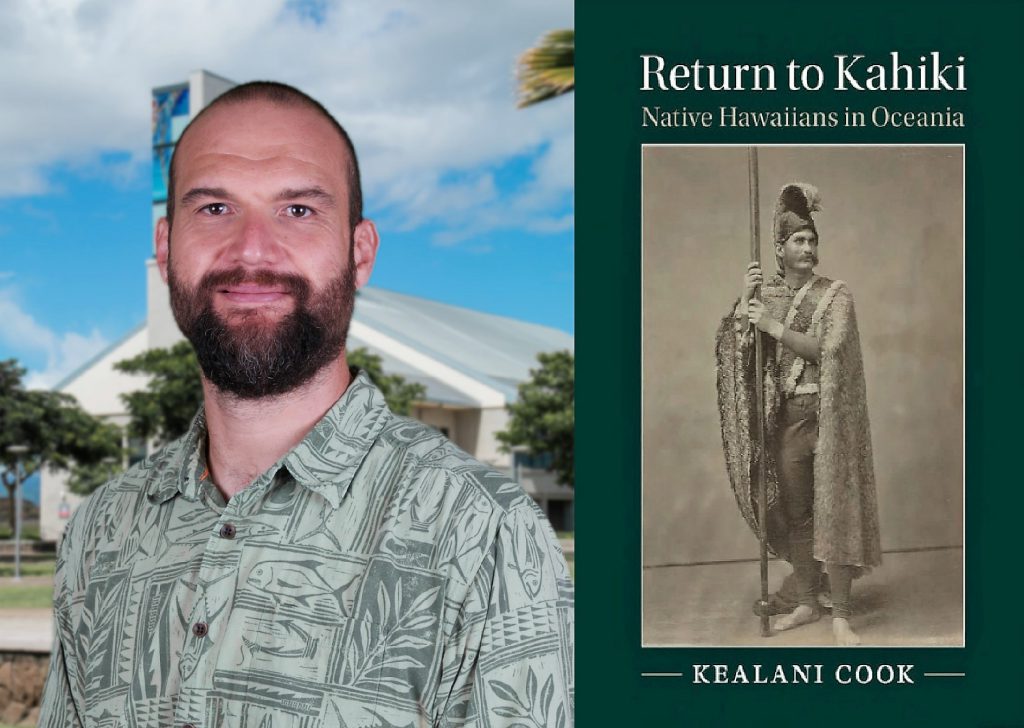 UH West Oʻahu’s Dr. Kealani Cookʻs “Return to Kahiki: Native Hawaiians in Oceania” has been published by Cambridge University Press, with one review calling it an important scholarly work in the growing field of Pacific and Oceanic history.

“With this remarkable book, Kealani Cook dramatically expands our understanding of the Native Hawaiian and Oceanic past and speaks powerfully to the Pacific present,” wrote reviewer Dr. David Chang, a professor in the University of Minnesota’s History Department whose own work has focused on indigenous people, colonialism, borders, and migration in Hawaiʻi and North America. “Meticulously researched and yet sweeping in its scale, Return to Kahiki reveals the often complex, sometimes contradictory, and always fraught way that Hawaiians thought about their place in the Pacific and engaged with other Pacific Islanders.”

Cook, an assistant professor of history in UH West Oʻahu’s Division of Humanities, sought out understudied sources written in Hawaiian, such as letters, newspapers, journals and reports for his examination. He researched how Native Hawaiians reacted to increased contact with and settlement by Euro/American empires between 1850 and 1907. Native Hawaiians during this period saw their population shrink as drastic changes in governance and economy occurred and as the kingdom was annexed by the United States.

The result of Cook’s research and analysis is Return to Kahiki, the title of which alludes to ancestral Hawaiian ties to Kahiki, a term often used to describe the South Pacific region that the Hawaiian people originally migrated from. The book looks at Native Hawaiians’ attempts to call upon and develop relationships with other Pacific Island peoples, focusing on the three specific Native Hawaiian travelers or sets of travelers: Native missionary efforts in Micronesia and the Marquesas, King Kalākaua’s 1887 legation to Sāmoa, and politician and businessman John Timoteo Baker’s 1907 tour of Polynesia.

In general, Cook finds that Native Hawaiians most interested in maintaining strong connections to the Hawaiian past and the culture that emerged out of it tended to embrace trans-Oceanic connections and sought to strengthen relationships with other islanders. Those more interested in distancing themselves from the Hawaiian past often sought to develop and proclaim a cultural distance from other islanders as evidence of their “progress” along European and American norms.

The analysis also results in an expanded view of Native Hawaiians — They were not one-dimensional and geographically static, but were more complex and had more dynamic views of the region and world than is sometimes represented.

Cook’s prior publications include “Ke Ao a me Ka Pō: Postmillennial Thought and Native Hawaiian Foreign Mission Work,” which appeared in the “Pacific Currents” issue of American Quarterly.

Return to Kahiki’s publication will be celebrated from 1:30 to 2:30 p.m. on April 6, in the James & Abigail Campbell Library 2nd-floor exhibition area with a book launch event. Return to Kahiki was published online in January, and is now available in print by major web bookstores, including Amazon.com and BarnesandNoble.com.