The University of Hawaiʻi employees are major contributors to the Foodbank’s annual drive and in 2017 gave about 14,000 pounds of food and $42,000 to the effort. That represented about 20 percent of the food donated and 30 percent of the cash raised during the Annual State Employees Food Drive. This year the state employee drive has a goal of collecting 80,000 pounds of food and $150,000 of donations. 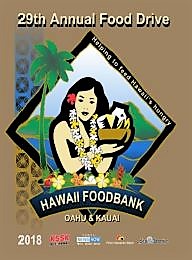 The annual food drives are a vital part of the Foodbankʻs efforts to feed the hungry on Oʻahu and Kauaʻi. Last year it fed about 287,000 people, or roughly one in five in the state.

Those wishing to make a monetary donation may do so.  Instructions on donations and how to make them online can be found at www.hawaii.edu/offices/op/fooddrive/2018/faqs-on-monetary-donations.pdf. You can also help by purchasing a Foodbank T-shirt at https://foodbank.publishpath.com/tshirts. The Foodbank reports 95 percent of every dollar goes to feed the hungry.

UH West Oʻahu food donations can be dropped off from 8 a.m. to 4 p.m., Monday to Friday at the Pueo Fitness Center.