An exhibit examining how Native American and Hawaiian communities are using traditional knowledge and Western science to solve modern-day environmental problems will open Saturday, March 17, on the first floor of the James & Abigail Campbell Library.

“Roots of Wisdom: Native Knowledge. Shared Science,” tells the stories of four Native communities, giving examples of how traditional knowledge of indigenous communities and Western science provide complementary solutions to ecological and health challenges. Exhibit organizers worked with the Waikalua Loko Fishpond Preservation Society and the Pacific American Foundation in Hawaiʻi to examine how restoration of fish ponds involves mending parts of the fish pond’s ahupuaʻa (land divisions that extended from the mountains to ocean). 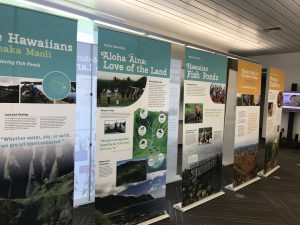 Roots of Wisdom was developed, produced and circulated by the Oregon Museum of Science and Industry, the Indigenous Education Institute, the Smithsonian Institution Traveling Exhibition Service, and the Smithsonian’s National Museum of the American Indian. The exhibition’s showing here was made possible with funding from PIKO and the Pueo Scholars program. Other funding came from the National Science Foundation.

Roots of Wisdom began its national tour at Windward Community College last year and will be on display here until Aug. 26. As part of the exhibit’s opening, one of the ʻOnipaʻa lecture series events will be devoted to discussing the joy and challenges involved in integrating traditional knowledge and science. The speakers will be Dr. VerlieAnn Malina-Wright from the Pacific American Foundation and Dr. Daniel Lipe from the UH West Oʻahu Sustainable Community Food System program.

Chancellor Maenette Benham will deliver welcoming remarks and Herb Lee of the Pacific American Foundation will also speak. The event is scheduled for 9:30-11 a.m., March 20 in the ʻUluʻulu Theater Space within the library.

Questions about the exhibit may be directed to Hawaiʻi-Pacific Resource librarian Kawena Komeiji at kawenask@hawaii.edu.