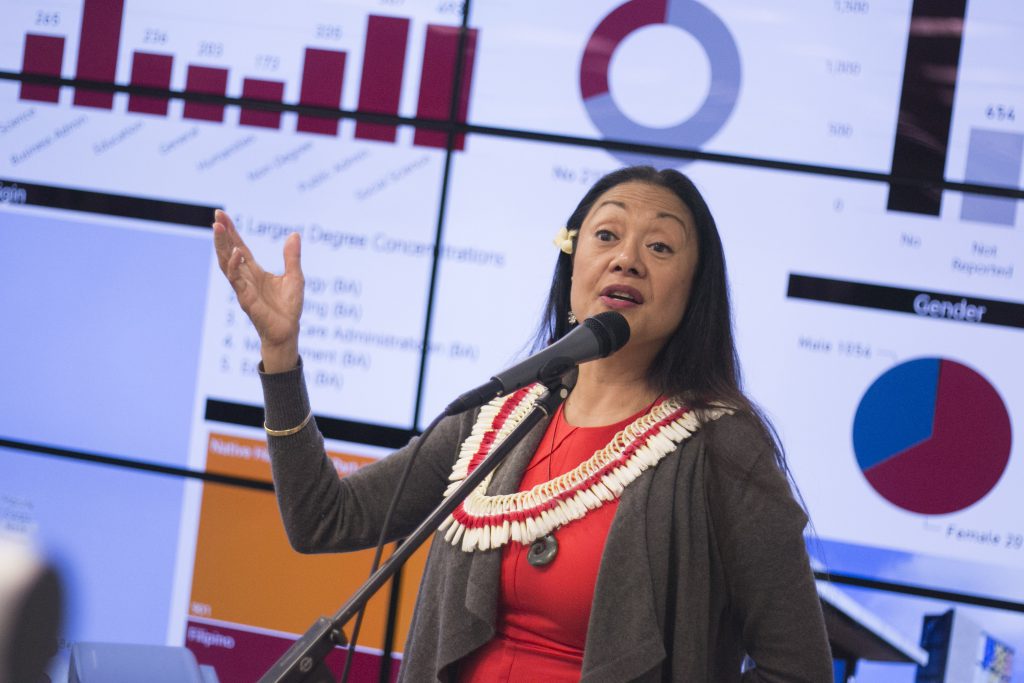 Chancellor Benham talks to members of the Kapolei Chamber of Commerce

UH West Oʻahu reached out to members of the Kapolei Chamber of Commerce in February to detail the campus’ attributes and importance to the area, while making a pitch for the businesses and organizations to support the school, its students, and graduates.

More than 60 chamber members and others were invited to listen to Chancellor Maenette Benham, other administrative officers, staff, and faculty relate how UH West Oʻahu is making strides and plans to make even bigger ones in the future as UHWO grows. “Everyone,” explained Benham, “is really excited about being here.”

The presentations were the outgrowth of discussions between Kiran Polk, Kapolei Chamber of Commerce executive director, and Benham, a chamber director, after the chancellor made a similar presentation to other board members. The Chamber has about 300 members which range from the area’s biggest employers to small businesses and non-profit organizations.

Polk said she and Benham agreed that providing information to the chambers’ members could engage the community and inform them about opportunities to support UH West Oʻahu, which plays a role in educating and providing people who go on to work and live in Kapolei.

“It just gives you a big picture,” Polk told about 25 members who gathered in the ʻUluʻulu Exhibit Area for the presentation on Friday. “I think you’ll find golden nuggets of information.” 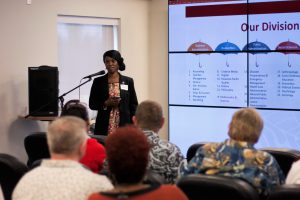 Chamber members heard about opportunities to become partners with the university, whether it be through creating internships or practicums for students, providing employment, supporting the early college programs, or through contributions to the University of Hawaiʻi Foundation that are earmarked for scholarships or faculty work.

Benham began the session by noting the importance of community to the university and noting the campus was the fastest growing public baccalaureate granting school in the nation and will continue to grow for years to come.  Others from UH West Oʻahu helped round out a picture of the campus being an major asset to the area, whether it be helping mold tomorrow’s leaders, yielding an educated workforce, or producing award-winning programs and students.

For example, members were told: