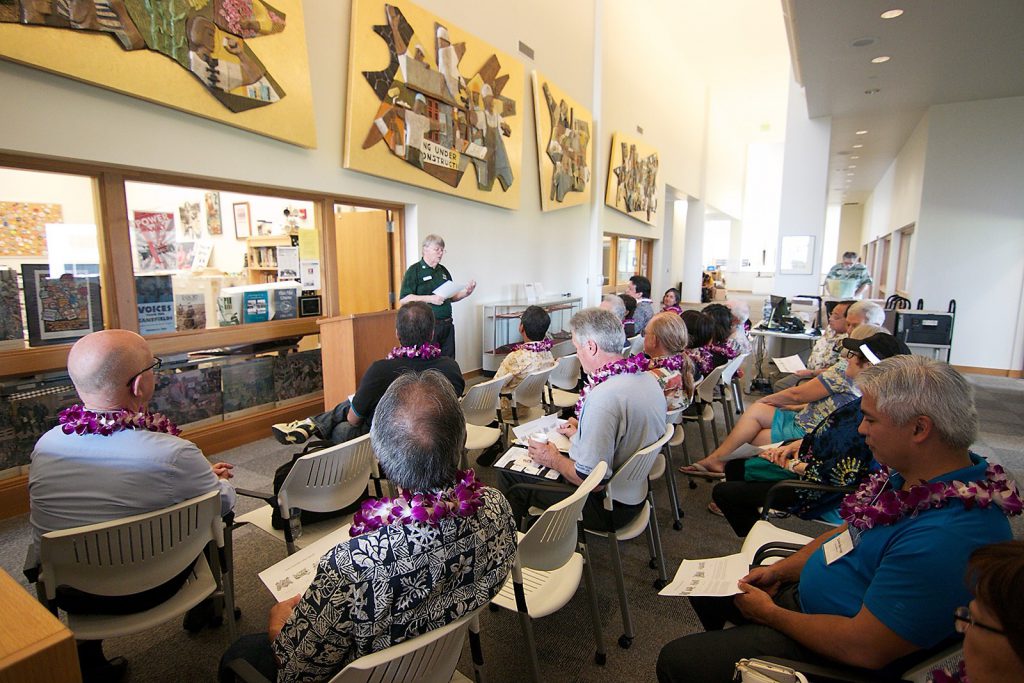 Dr. William Puette of CLEAR addresses guests who helped in preserving and installing the Enomoto mural in the library.

A set of exceptional ceramic murals by noted Hawaiʻi artist Isami Enomoto were officially welcomed to the UH West Oʻahu on Feb. 7 during a dedication ceremony that thanked individuals, organizations, and others who contributed to the more than two-year effort to save, restore and install the artwork on campus.

The five murals are featured in an area housing the Center for Labor Education and Research (CLEAR) in the James & Abigail Campbell Library, thanks to efforts to save the works by a non-profit organization, Docomomo US/Hawaii Chapter, which took on the task of saving the artwork when Bank of Hawaiʻi was closing its Kapahulu Branch. 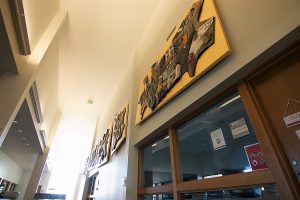 “It was a unique attempt to save this with different people (contributing),” said Dr. William Puette, director of CLEAR, which provides labor education, research and related programs.

The five murals created in 1961 revolve around a distinct labor theme, with each mural depicting people in different sectors at work – small business workers that populated Kapahulu Avenue: agriculture, construction, financial and transportation. The murals hung on a wall above the teller stations in Bank of Hawaiʻi’s Kapahulu branch until 2015, when the bank location was closed and sold. 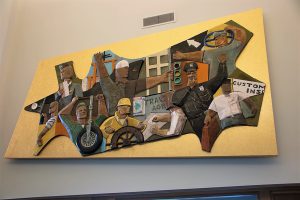 The bank contacted Docomomo US/Hawaii chapter, a group dedicated to understanding, preserving and documenting the modern movement in urban planning, architecture, architectural interiors, landscapes and public art, to see if they would take possession of the artwork. Docomomo Hawaiʻi agreed to save the murals.

Enomoto, who passed away in 2016, was a noted mid-century ceramicist who produced the abstract design wall tiles for the International Concourse at  Daniel K. Inouye International Airport, and was the ceramic technician for artist Jean Charlot’s on several projects, including murals on the United Public Workers building on School Street.

“He was in my opinion one of this state’s treasures,” said Puette, speaking at the dedication ceremony. “I look upon it (the murals) as a brilliant work.” 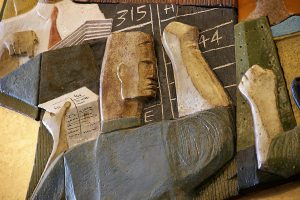 The smallest of the murals depicts finance industry workers

Docomomo Hawaiʻi played the role of an intermediary, taking possession of the murals from Bank of Hawaiʻi while it searched for a final home, said Puette. Calls to the state Department of Labor and Industrial Relations and the state AFL-CIO yielded a suggestion of donating it to CLEAR.  In November 2015 Puette got a call from Docomomo Hawaii board member John Williams inquiring whether CLEAR would be interested in the murals.

“When I got the call about this I practically screamed,” said Puette, who explained he had been looking for artwork that complimented CLEAR’s own mission. Puette accepted, thinking it would take a month or two to have the murals installed — the idea of displaying artwork celebrating working people was in keeping with CLEAR’s work and appealed to him.

“I had no idea it was going to take two years,” Puette said, explaining he faced numerous hurdles. Along the way Puette managed to convince the UH West Oʻahu administration that installing the art was feasible, getting engineers to survey whether the library walls were structurally sound enough to bear the mural’s heavy load, and helping Docomomo Hawaiʻi raise money to install and restore the art. 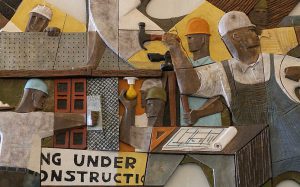 Construction workers are the subject of one of the murals

Docomomo agreed to move, crate and store the works that weigh up to 650 pounds each. Docomomo members who were structural engineers helped survey the library walls and Williams visited frequently during the four-day installation during the December break to monitor the installation.

The work also included the restoring the gold paper on the background of the murals, which Docomomo Hawaiʻi will be signing over to the State Foundation on Culture and the Arts, Puette said.

CLEAR also helped Docomomo Hawaiʻi in raising $42,750 needed to install the murals on walls outside of the CLEAR Archives Room and a portion of a wall above the B233 computer lab. This included approaching many in Hawaiʻi’s labor community for contributions.

The donors included many Hawaiʻi labor groups and others, including: