UHWO’s One Billion Rising dance in 2016

The state’s only registered One Billion Rising event will take place at UH West Oʻahu on Valentine’s Day, with students, faculty and administration urged to “rise up” against dating and domestic violence.

The event in the campus courtyard will feature a talk by U.S. Navy Capt. Roy Nafarrete titled “Change the Culture,” and a Domestic Violence Survivor Panel, and the performance of a hula and One Billion Rising’s signature “Break the Chain” dance. Two performances (beginning at noon) will be videotaped and posted online, as is the case with other sites performing dances at One Billion Rising events across the world.

The One Billion Rising campaign, launched on Valentine’s Day 2012, began as a call to action based on the statistic that 1 in 3 women on the planet will be beaten or raped during her lifetime. 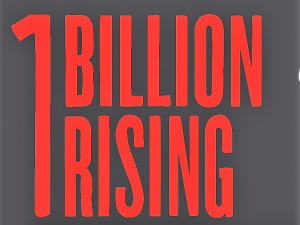 Dance is an integral and creative aspect of the One Billion Rising events, with participants dancing to choreography by Debbie Allen and the song “Break the Chain.” Local communities are not required to follow the dance exactly and the organization encourages people to localize their artistic expressions by using any version of the choreography the community chooses.

The UH West Oʻahu Compliance Hui is sponsoring the event to show unity and solidarity on a variety of issues affecting communities, including raising awareness regarding dating and domestic violence. The UHWO Compliance Hui is a campus initiative to ensure the campus engages in necessary and appropriate awareness and programming as required by with state and federal laws and is headed by Beverly Baligad, UH West Oʻahu Director of Compliance.

Stacy Moniz, executive director of the Hawaiʻi State Coalition Against Domestic Violence, will co-emcee the event and contribute items to be given away. The One Billion Rising organization has encouraged host sites to be creative and make the events “their own.” Therefore, the PIKO Project’s Pu’u Zablan has written an oli, “He Mele No Ka Lehua,” which is a chant to encourage those who have been victimized to remain steadfast in spite of difficulties and honors those who have endured and overcome violence, injustice, and inequity. The oli and hula twill be performed will be taped and performed in addition to the recording of the “Break the Chain” routine.

The schedule for the day is:

“Break the Chain” dance practice sessions will take place at Mondays at the start of Zumba classes at 4:45 p.m. in the Campus Center loft; at 4:30 p.m. Tuesdays in the Campus Center Plaza led by the Dance Club, and again Thursday at 4:30 p.m. in the plaza led by the Dance Club. For those who can’t make it but still want to practice “Break the Chain,” an instructional video has been posted to the Internet.

Folks who want to RSVP for the event can do so here. Participants are encouraged to wear blue or pink on the day of the event.