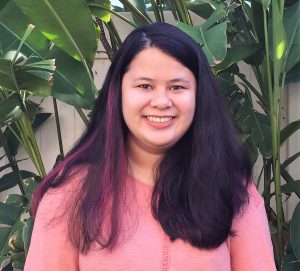 “All we asked was for a little chicken skin, but it turns out these talented local writers didn’t mind stirring an eye of newt and a chicken bone or two into the bubbling cauldron,” remarked Honolulu Magazine.

The magazine congratulated Marcos for her short story, Bonfire Blues, and noted “we’ll never feel the same again about a party on the beach.” The tale describes a creepy meeting with an old woman who speaks with a raspy voice and has eyes that are lifeless and the color of coal. Although the storyteller sprints away to safety, the story the haunting encounter will be a lasting one.

Marcos, who was schooled at home, said her time at UH West Oʻahu came to play in the writing of the story.

“Attending UHWO English classes have helped me craft my story, as they developed my writing skills. Dr. (David) Odhiambo’s creative writing courses helped me develop my storytelling skills,” said Marcos in an email. “The inspiration for my story is drawn from Dr. (Carmen) Nolte-Odhiambo’s fairytale class, which kindled my love for the darker fairy tales.”

“Really, all my English classes from Shakespeare with Dr. (Brenda) Machosky to Film Noir with Dr. (Stan) Orr have taught me how to tell a story. By taking all these classes and immersing myself in literature I was able to learn what makes a good story, and apply that when I wrote mine.”

Marcos’ accomplishment earned her the publication of her story in Honolulu’s October 2017 issue and a gift certificate from Ruth’s Chris Steak House.