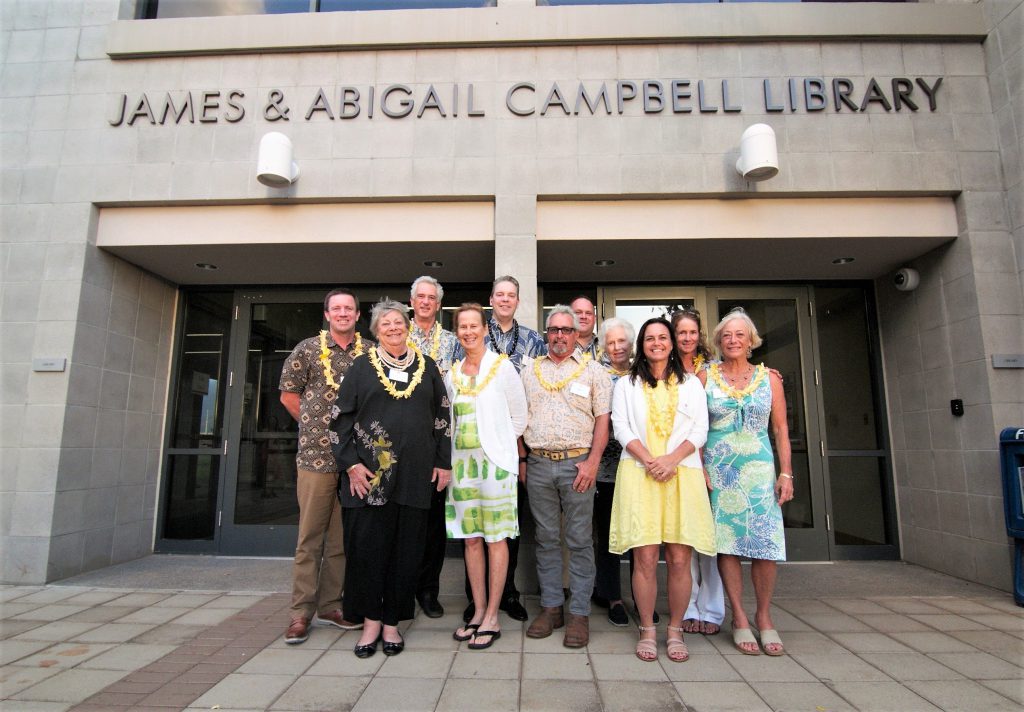 Members of the Campbell family, the James Campbell Co., and the James and Abigail Campbell Family Foundation attended the library naming event.

The University of Hawaiʻi-West Oʻahu library has been named the James and Abigail Campbell Library to recognize their legacy role in the school’s history.

The library, which is a focal point of the campus, was named after the Campbells during an Oct. 18 evening ceremony.  Portraits of James and Abigail Campbell were also unveiled near the entrance to the 60,000-square foot building. The naming recognizes the Campbell family and their decades of support of the University of Hawaiʻi and of education, and bettering the lives and futures for the entire community on the west side and throughout the state, and upon whose former lands the UHWO campus sits.

“The students, faculty and UHWO community mahalo the James Campbell Company and the Campbell ʻOhana for their gracious generosity! Where once there were fields of sugarcane we now grow our next generation of leaders, career creators for the 21st Century!” 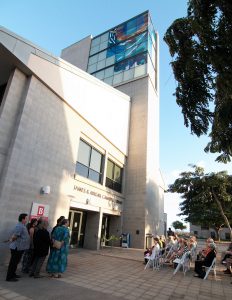 An evening ceremony commemorated the naming

The library is a centerpiece of the campus with its distinctive stained glass tower featuring the work of Kauaʻi artist Carol Bennett. Housed inside the two-story building are the library and its collection, study areas, the ʻUluʻulu: The Henry K. Giugni Digital Moving Image Archive of Hawaiʻi; the No’eau tutoring center, and the Center for Labor Education and Research.

The naming of the library was previously approved by the University of Hawaiʻi Board of Regents in March 2017 to honor the Campbells’ sizable impact on the establishment of the UH West Oʻahu campus. The Campbell Estate was supportive of efforts to establish a permanent UH West Oʻahu campus through decades of effort to move the campus from property adjacent to Leeward Community College to a permanent location, something that occurred in 2012 when the Kapolei campus opened.

“I think it’s a tremendous recognition of James and Abigail’s Trust, the family and the company’s contributions to West Oʻahu and the students that will learn here,” said Timothy Brauer, president and chief executive officer of the the James Campbell Co., which succeeded the Estate of James Campbell.

Brauer noted the library and campus help carry on the Campbell’s legacy of helping the Leeward Oʻahu community. The legacy includes efforts to support education and improved quality of life for Hawaiʻi people by the James and Abigail Campbell Family Foundation, which is funded primarily by Campbell family members.

UH West Oʻahu serves a historically underserved region of Oʻahu and in fall 2017 had an enrollment of 3,082 students. The school was recently cited as the fastest growing U.S. public baccalaureate institution by the Chronicle of Higher Education.