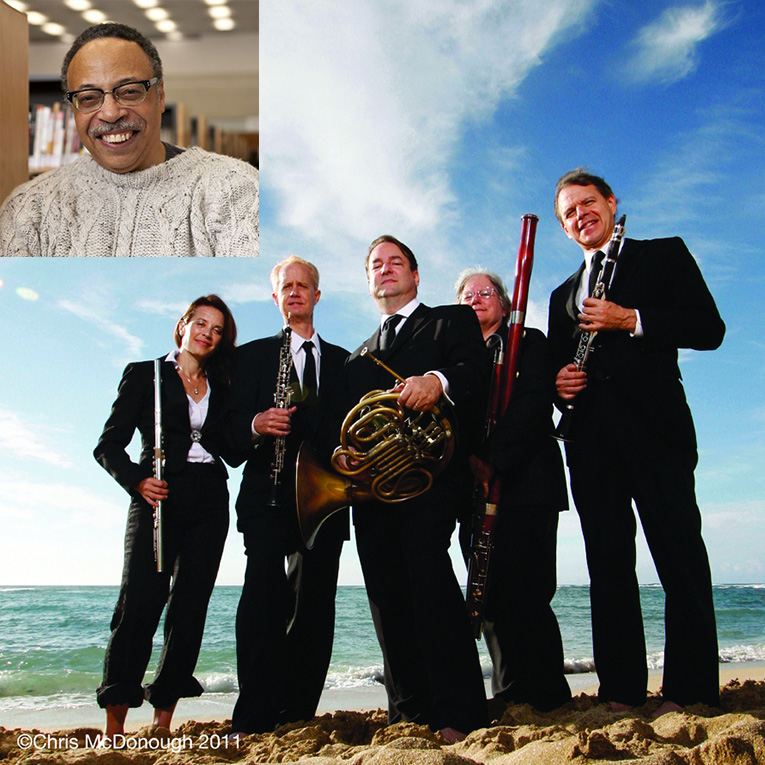 George Elliott Clarke (inset, upper left) will give a Distinguished Visiting Scholar talk at 3:30 p.m. at the Library. At 7 p.m., the Spring Wind Quintet takes stage.

Travel to Canada and then to Latin America at the UH West Oʻahu Library this Wednesday, Oct. 18, thanks to a pair of events scheduled in the afternoon and evening.

Beginning at 3:30 p.m. Wednesday, listeners can be transported to Canada on the words of Distinguished Visiting Scholar George Elliott Clarke, a Toronto resident.  Clarke, Canada’s Parliamentary Poet Laureate, will read from two of his latest publications, Canticles I, a critically acclaimed collection of poems; and The Motorcyclist, a novel inspired by the life of Clarkeʻs father.

The author talk will take place in the Library’s second-floor exhibition space and will end at 5:30 p.m. Clarkeʻs honors include the Portia White Prize for Artistic Achievement (1998), Governor-General’s Award for Poetry (2001), the National Magazine Gold Medal for Poetry (2001), the Dr. Martin Luther King Jr. Achievement Award (2004), the Pierre Elliott Trudeau Fellowship Prize (2005), the Dartmouth Book Award for Fiction (2006), the Eric Hoffer Book Award for Poetry (2009), appointment to the Order of Nova Scotia (2006),  appointment as Poet Laureate of the City of Toronto (2012-15), and eight honorary doctorates.

Those who stay on campus can come back at 7 p.m. for music of composers of Cuba, Brazil, Argentina, and more as performed by the Spring Wind Quintet. The two-hour event is free for UH West Oʻahu students with a student I.D.

The concert is one of two with Chamber Music Hawaiʻi in the confines of the Library, which is said to have acoustics similar to that of a concert hall.  Spring Wind Quintet is an acclaimed group of Hawaiʻi musicians that performs throughout Hawaiʻi and internationally.  The group is the recipient of CMA Ensemble Residency Grant and National Endowment for the Arts grants.