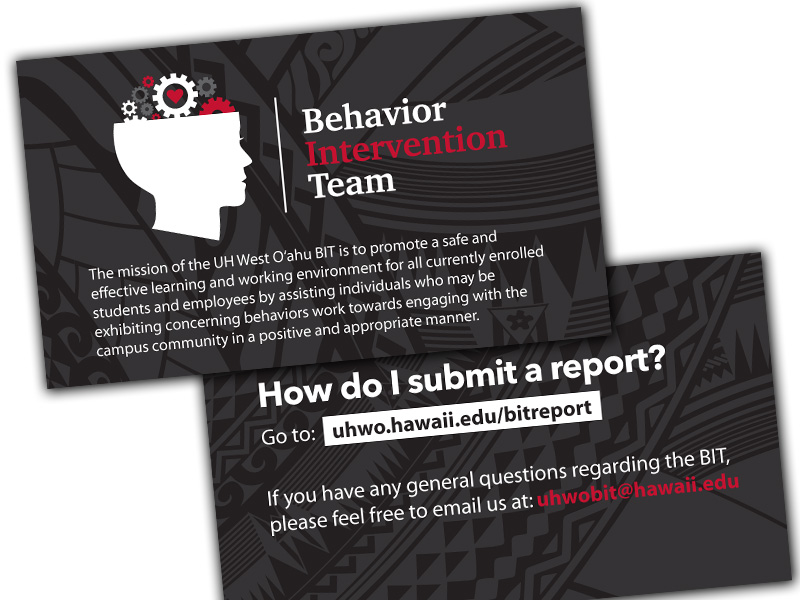 BIT cards will be handed out

An important step in UH West Oʻahu’s efforts to prevent violent acts such as campus shootings or individuals harming themselves will take flight with the introduction of the UHWO’s Behavior Intervention Team (BIT) during Professional Development Day.

The team is an integral part of a system set up to collect reports regarding individuals of concern, such as those who exhibit mental instability or problematic behavior.  BIT will be introduced by way of a four-panel business card that will be handed out during PD Day. It contains information BIT’s mission and how to file BIT reports.  (At www.uhwo.hawaiʻi.edu/bitreport )

Such systems have begun cropping up on college campuses nationwide to provide a formalized process and as a way to respond to reports of troubled individuals, whether the concerns be about potential harm to themselves or others. A report on the 2007 mass shooting at Virginia Tech found that Seung Hui Cho, an angry and disturbed student, exhibited mental instability prior to the shootings. However, reports on his numerous pre-shooting incidents were not coordinated and Virginia Tech did not intervene effectively before his killing of 32 students and faculty members. 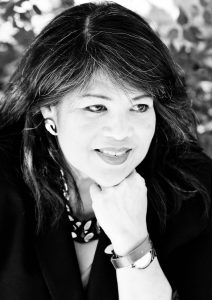 “The mission of the UH West Oʻahu BIT is to promote a safe and effective learning and working environment for all currently enrolled students and employees by assisting individuals who may be exhibiting concerning behaviors,” said Beverly Baligad, UH West Oʻahu Director of Compliance.

The card is representative of the evolution of UH West Oʻahu’s efforts to develop a system for people to report safety and other concerns about individuals, whether staff or student, and for a group to decide whether further action was warranted, if any at all.

UH West Oahu’s Behavior Intervention Team is currently the first and only formalized BIT with the UH System, according Baligad.  She said it took over a year and a half to put all foundational and supporting processes in place within the campus and a series of meetings with the administration to determine which “functional areas” would best fit with the needs of our BIT.

Through the efforts of Baligad, UH West Oʻahu  has been creating and implementing structures, membership and protocols in accordance with current national best practices.  In July the campus implemented Maxient, an online reporting system capable of receiving, categorizing and storing campus reports about individuals of concern within the campus community.

The mission of the UH West Oʻahu BIT is to:

The cards are one portion of this effort and are designed to be kept in a wallet or purse.  It includes information on contacting BIT with concerns and how to submit a report. It notes that BIT should not be contacted in emergency situations.  Instead people are directed to call the UH West Oʻahu Campus Security at (808) 689-2911 immediately.

Presentations and trainings regarding UH West Oʻahu’s BIT can be provided on request.  Contact Baligad at bbaligad@hawaii.edu or at uhwobit@hawaii.edu .