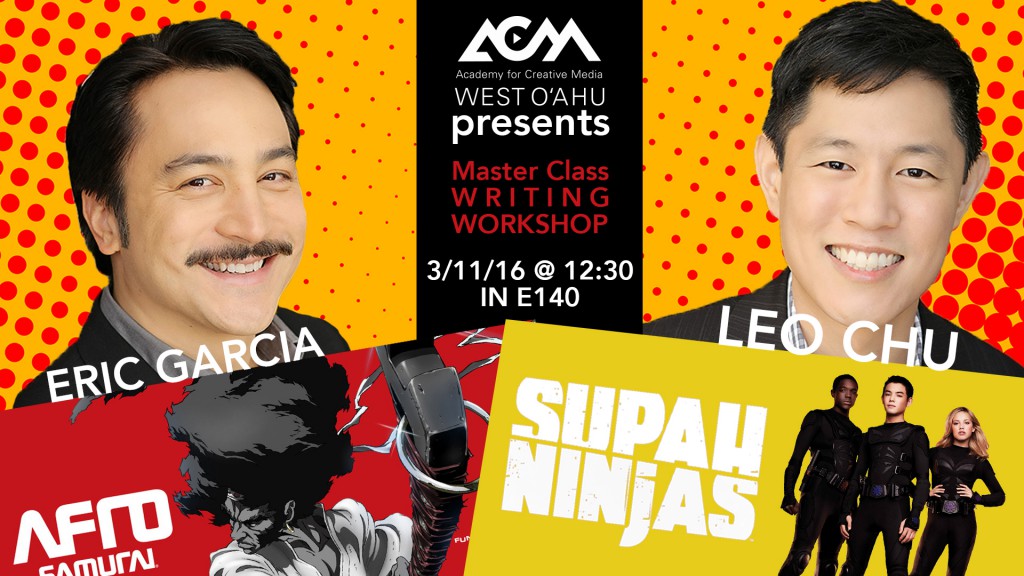 Ever dream of writing movies and TV shows, comics, web series and video games, too? Are you serious about improving your storytelling skills and taking your writing to the next level? Come to a free, two-hour workshop with industry experts Eric Garcia and Leo Chu, who can improve your writing skills and offer tips on character-building, story structure, dialogue and more. Plus get insider tips on how to pitch your stories to Hollywood executives.

Creators, Executive Producers and Showrunners of Nickelodeon’s Supah Ninjas, and former Executive Producers and Showrunners of the anime series Afro Samurai, Eric Garcia and Leo Chu will host a free script writing workshop on Friday, March 11, at 12:30 p.m. in E140. This Creative Media Master Class writing workshop is sponsored by the University of Hawaiʻi Academy for Creative Media System and UH West Oʻahu’s creative media concentration. The masters series aims to increase student understanding of the art and business of content creation. All presentations are free and open to students, faculty, and the public.

Eric Garcia and Leo Chu made their mark as the Emmy-nominated executive producers and showrunners of Spike’s adult action series “Afro Samurai” starring Samuel L. Jackson and Lucy Liu. They expanded the franchise with a hit Namco video game and Tor graphic novel series as well as writing and executive producing the sequel “Afro Samurai: Resurrection,” which made history as the first animé to win a Primetime Emmy Award.

Most recently, they were the creators, executive producers, and showrunners of the live-action, Emmy Award-winning, action-comedy series “Supah Ninjas” starring George Takei and Randall Park for Nickelodeon. The series is the number one show in its time period for boys, airs constantly on Nick’s various networks, and won them a Writers Guild Award. They have developed pilots for NBC, FOX 21, MTV, Dreamworks, Spike and AwesomenessTV; and penned films for Sony, Warner Bros., and Disney.

Previously, Chu was the vice president of creative affairs for Walt Disney Feature Animation where he developed such Academy Award-winning films as Pixar’s “Finding Nemo” and Miyazaki’s “Spirited Away.” Other films include Disney’s “Mulan,” “Lilo & Stitch,” “Tarzan,” “Dinosaur,” and “Meet The Robinsons” as well as Pixar’s “Toy Story” and “Monster’s Inc.”

Prior to teaming with Chu, Garcia served as a writer for Walt Disney Television Animation where he worked on Disney’s breakout animated series “Recess,” the subsequent hit film Recess: School’s Out,” and Disney’s top-rated animated show, “Lloyd in Space.” In addition, Garcia worked for Studio Ghibli and Buena Vista Home Entertainment on the adaptations of Miyazaki’s beloved masterpieces “Kiki’s Delivery Service” and “Laputa: Castle in the Sky.”