The nation’s premier graduate fellowship for those pursuing careers as public service leaders has named a University of Hawaiʻi–West Oʻahu student to be among its recipients.

The Truman Foundation selected political science major James Patrick Ward to be part of its 2020 Class of Truman Scholars. Students are chosen for this prestigious award based on their records of leadership, public service, and academic achievement.

The highly competitive scholarship offers up to $30,000 to apply toward graduate study in the United States or abroad in a wide variety of fields. The competition was narrowed down from 773 applications to 190 finalists. The foundation selected 62 college students from 55 institutions as 2020 Truman Scholars. Ward is the only student from the UH System selected this year. 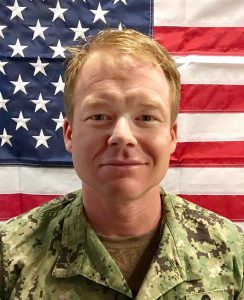 “I was absolutely floored,” said the ʻEwa Beach resident, 37, a First Class Petty Officer in the Navy and a Navy Diver.

Ward received an email last week from UH West Oʻahu Chancellor Dr. Maenette Benham notifying him of the news, which he immediately shared with his wife, Lorna.

“It wasn’t until she broke into a big smile and started shouting that it finally hit home,” said Ward, who noted that this happened while he was completing a 14-day post-travel quarantine, “so this was all conducted through our lanai windows!”

This is the first scholarship Ward has ever received and it took a few minutes for his shock to transform into elation, he said.

“Of course, after which, I found myself jumping up and down and shouting for joy — all the while maintaining appropriate social distancing,” he quipped. “I still get giddy thinking about it.”

In a follow-up conversation earlier this week, Benham told Ward via Zoom video conference that she was happy for him and his family, and that this was an extraordinary opportunity.

“Here at UH West Oʻahu, our value proposition is to graduate community-based leaders who will create change in our communities grounded on social justice,” Benham said to Ward. “You being selected a Truman Scholar speaks volumes about both what you bring as a learner and what your professors are doing.”

ʻA new sense of motivation’

The Truman Foundation is the official federal memorial to the nation’s 33rd president, Harry S. Truman. The hallmark of the foundation’s work is the Truman Scholarship, a merit-based award offered to U.S. citizens and U.S. nationals from Pacific Islands who want to go to graduate school in preparation for a career in public service.

The primary criteria for selection for the Truman Scholarship competition include an extensive record of campus and community service, a commitment to a career in government or the nonprofit and advocacy sectors, a high probability of becoming a “change agent,” and a strong academic record.

The scholarship’s offerings include recognition of outstanding potential as a leader in public service, enhanced access to highly competitive graduate institutions, and membership in a community devoted to helping others and to improving the world.

According to the foundationʻs website, Truman Scholars are working in the West Wing and sitting on the U.S. Supreme Court, transforming nonprofits and organizing for change in local communities, are leaders in academia and health care, and can be found in every branch of the Armed Services – many making a difference beyond the borders of the United States.

To be invited into the Truman Scholar family and institution is a great honor, Ward said.

“Moreover, I feel a new sense of motivation at the challenge presented by living up to the Truman Scholar reputation,” he said. “Winning this award validates the way I have been living my life: volunteering for military service, working with my local, regional, and global communities, and constantly striving to better my mind.”

Ward plans to use the scholarship to attend the UH Mānoa Richardson School of Law and the UH Mānoa graduate school of Political Science, utilizing the dual degree program to earn a Juris Doctorate (J.D.) and postgraduate doctoral (Ph.D.) degrees.

Ward aspires to become a lawyer and policy specialist working towards social justice.

“But in truth, it’s a lot more complex than that,” Ward said.

In the short term, Ward hopes to be able to serve in the Navy Judge Advocate General (JAG) program as an advocate for service members. After active duty service, he plans on joining the Hawai‘i District Attorney’s office as a Public Defendant.

“My overall goal is to provide legal service on a personal level and public basis for those of us that need it most – the underfunded, undereducated, and marginalized people who make up the vast majority of America and Hawaiʻi,” Ward said. “This is one of the reasons I am so drawn to the Richardson School of Law. Their Pro-Bono program and Hawaiʻi Innocence project puts law students right where they should be, helping people in need.”

In the meantime, Ward – who enrolled at UH West Oʻahu in the spring of 2019 – is focused on graduating in December with a Bachelor of Arts in Political Science.

Ward said since becoming a student at UH West Oʻahu, every single professor he has worked with and studied under has acted in the manner of a mentor. He said he specifically owes thanks to Dr. Monique Mironesco, Professor or Political Science, and Dr. Masahide Kato, Assistant Professor of Political Science.

“Both have guided me along the path of becoming an active participant in the field of study, rather than just an observer,” Ward said. “Both gave lectures and readings that resulted in ‘a-ha!’ moments that enabled me to understand my desire to practice law and work for social justice.”

Mironesco and Kato offered their congratulations to Ward upon learning of his achievement. Mironesco said Ward is an excellent student who is well on his way to becoming a gifted scholar.

“He has an uncanny ability to appreciate viewpoints other than his own and ground theoretical knowledge in everyday life,” she said. “He consistently goes above and beyond course requirements in order to satisfy his intellectual curiosity – a wonderful trait which will serve him well in his future educational endeavors.”

Kato agreed with Mironesco. “If there is anything to add, I see James has become more humble with the progress in his quest for knowledge,” Kato said.

Ward said his experience at UH West Oʻahu has helped shape him into who he is today.

“My time at UH West Oʻahu seems to have gone by in the blink of an eye, but the effect that the students, faculty, and staff have had on me are indelible and amazing,” he said.

He has had numerous class experiences – in the classroom and via distance learning – that have fundamentally shifted the way he perceives the world and how he approaches the human condition, Ward said.

“The Political Science program at UH West Oʻahu may be small in stature but punches way above its weight-class, integrating indigenous philosophies and concepts into the otherwise stale and worn-out paradigms of western political science,” he said. “In this sense UH West Oʻahu is incredibly precious and special, and I think a perfect incubator for new paradigms of political science and law in Hawaiʻi.”

“I look forward to remaining an active participant in the UH West Oʻahu family after graduation as an alumni, volunteer, and mentor,” Ward said.