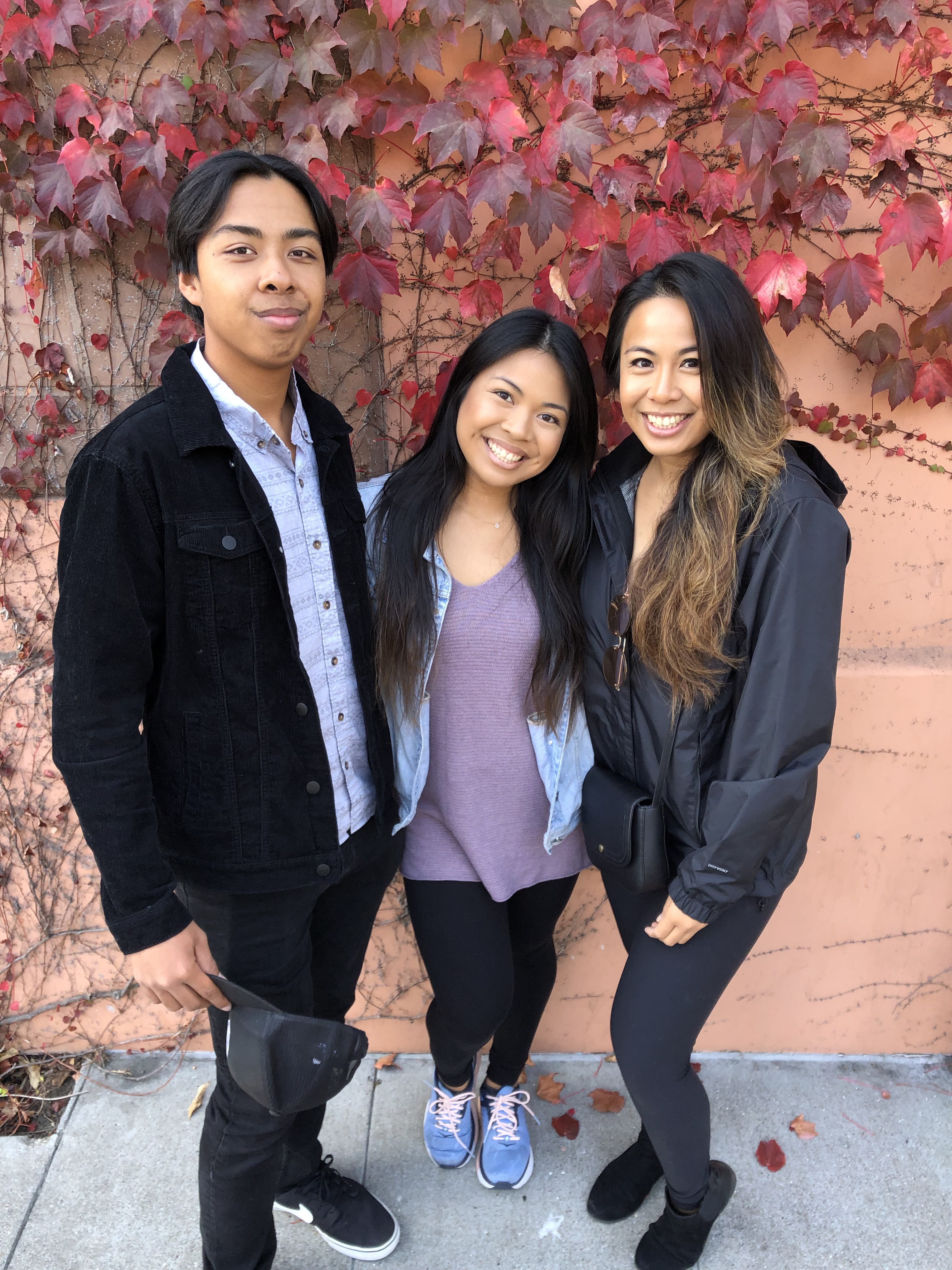 Taking a temporary hiatus from college turned into a three-year break that left Jo-Ann Payongayong feeling overworked, tired, and unfulfilled. She knew there was more to life than the day-in, day-out drudgery.

“When you’re doing the daily (work) grind for years, you wonder, is this really all that there is?” recalled the Kapolei resident, 27. “That’s when it clicked. I thought, I probably should go back to school to open the opportunity of something more.”

Payongayong enrolled in the University of Hawaiʻi-West Oʻahu in fall 2017, and two years later, she will receive that “something more” in the form of a college diploma. At the UH West Oʻahu Fall Commencement Ceremony on Dec. 14, she will graduate with a Bachelor of Applied Science with a concentration in psychology. Payongayong is one of more than 320 students who will receive their college degrees from UH West Oʻahu this semester.

“UH West Oʻahu has provided opportunity to me that I didn’t think would ever be for me,” Payongayong said. “Itʻs been a place of growth, itʻs been a place of happiness and love, and itʻs just molded me into this person who I wouldn’t have recognized a couple years ago.”

All in the family

Payongayong isnʻt the only one in her family benefiting from UH West Oʻahu and all it has to offer.

Her younger sister, Jalen Busch, 23, graduated from the university in spring 2018 with a Bachelor of Arts in Business Administration with a concentration in marketing.

“UH West O’ahu helped me succeed as a student because they believed in me while also challenging me,” said Busch, who now lives in Virginia Beach, Va., with her husband. “I developed and grew over the years through a great education and strengthened many skills, such as my communication, work ethic, organization, and time management.”

Much like her older sister, Busch chose to attend the university because she liked its close proximity to home and small class sizes, among other things.

“I moved shortly after I graduated and having a degree, and coming from such a great home campus, the transition didn’t seem too scary,” said Busch, who is now working as a social media correspondent for a growing business based out of Colorado. “UH West Oʻahu gave me the confidence I needed to believe that everything after school –  moving to a new place, finding new friends, a job – would be alright.”

And now the youngest Payongayong sibling, Joseph Shane, 19, is a freshman at UH West Oʻahu, “which is crazy because weʻre eight years apart,” said the eldest Payongayong, who had never before attended school at the same time as her brother.

But in all seriousness, Payongayong constantly encourages her brother, who is going to school while also working part-time, to not lose his drive for higher education.

“Thatʻs a good purpose to have, no matter what,” she said. 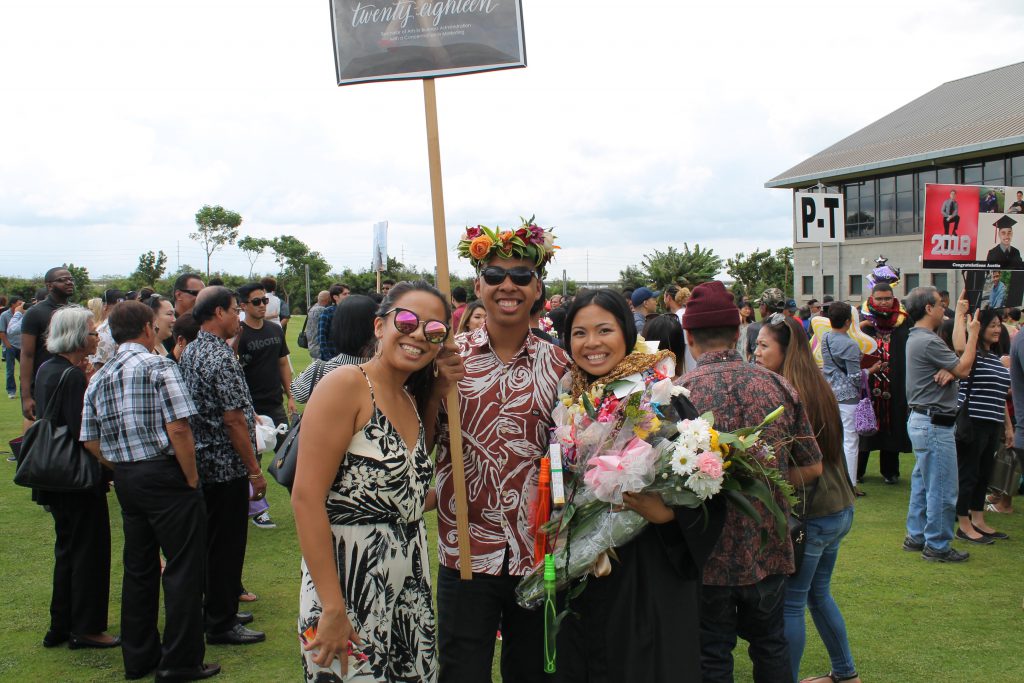 ‘This is what I have to do’

Payongayong has a close-knit relationship with her two younger siblings and her desire for both of them to succeed played a big part in her journey from high school graduation to college graduation.

Payongayong graduated from Kapolei High School in 2010, which was a trying time for her family.

“After high school, my dad left and it was just my mom,” Payongayong said. “So I helped my mom … take care of the family.”

Payongayong went on to Leeward Community College and also worked to financially contribute to her family.

“I tried going to LCC as a part-time student, and working, and taking care of them, so thatʻs why it didn’t work out,” she said. “For two years, I tried to do it.”

Thatʻs when Payongayong decided to take a break from college and chose instead to work full-time at a hotel and continue to help support her family.

Payongayong’s sacrifice did not go unnoticed by Busch, who credits her family for helping her finish school.

“On those tough days of me not seeing the light at the end of the tunnel, I always thought about my mom, a single mother raising us three kids; my oldest sister, who sacrificed her time to not go to school and work full-time to support our family so her younger siblings can have that opportunity; and my awesome younger brother, who always helped and supported me through the highs and lows,” Busch said.

After three years away from school, Payongayong was ready to return and consider the possibilities for a better life. She was determined and focused on getting her college degree.

“Coming back as an older student too, you have a little different perspective,” she said. “You think, ‘This is what I have to do. I’m doing it.’ ”

But Payongayongʻs time at UH West Oʻahu didn’t come without any obstacles, one of the biggest being a major car accident in Las Vegas on Aug. 4 – right before the start of her last semester.

Payongayong and her cousins were on their way to California when the car they were in was T-boned by a big rig. Payongagong suffered the worst injuries – two fractured bones in her back – and she had to be transported by helicopter to a hospital.

It took months for her to physically and mentally heal, but she persevered. And the accident helped put things into perspective for her.

“Life is so short,” Payongayong said. “Why waste time not doing what you want to do?”

“The true testament of who Jo-Ann is, is her relentless and bounce-back charisma,” said Mareko, who Payongayong considers both a mentor and friend. “Her ability to keep pushing through life’s obstacles is truly inspiring and now that she is graduating, it is exciting to see how much of a positive impact she will have on her family, community, and in the world.”

Like many UH West Oʻahu students, Payongayong juggles a full schedule at school – 12 credits in four classes – and work. She has two part-time jobs, including on campus in the Admissions Office as an admissions student specialist.

“Her happy and thoughtful nature combined with her amazing work ethic made her a wonderful addition to our office,” said Michelle Cohen, Director of Admissions at UH West Oʻahu.

Payongayong attributes part of her success as a student to numerous faculty and staff who supported her over the years, including Cohen, Mareko, and admissions specialist Kyra Takeuchi.

“They have made me realize a lot about myself,” Payongayong said. “They’ve just encouraged me. They’ve made me believe in myself, which is not something that’s easy sometimes.”

Cohen, in response, had nothing but praise for Payongayong.

“One of the things that makes her so special is that no matter how much she has on her plate, she will put others first if it will help make their life easier for them or will put a smile on their face,” Cohen said. “And at the same time, whether she is contributing to her study group, working on a paper, completing a project in our office or helping her family, she goes the extra mile to be her best.”

Payongayong is excited about receiving her psychology degree on Dec. 14.

“I just love psychology,” she said. “Psychology has just been something that I’ve been really interested in – just the way that humans work, the way the mind works, the study of human interaction – that’s a huge thing for me.”

Payongayong is exploring her options after graduation.

“Whatever it is I end up doing, I want to further my education and be able to help others,” she said.

But one thingʻs for sure: She’ll never forget her time at UH West Oʻahu, which has opened the doors to so much more for Payongayong.

“I’ll always remember when I came into this place thinking that I’m just going to get my degree because that’s what everybody’s doing,” she said. “But now I’m thinking so much bigger and just that anything is possible.”