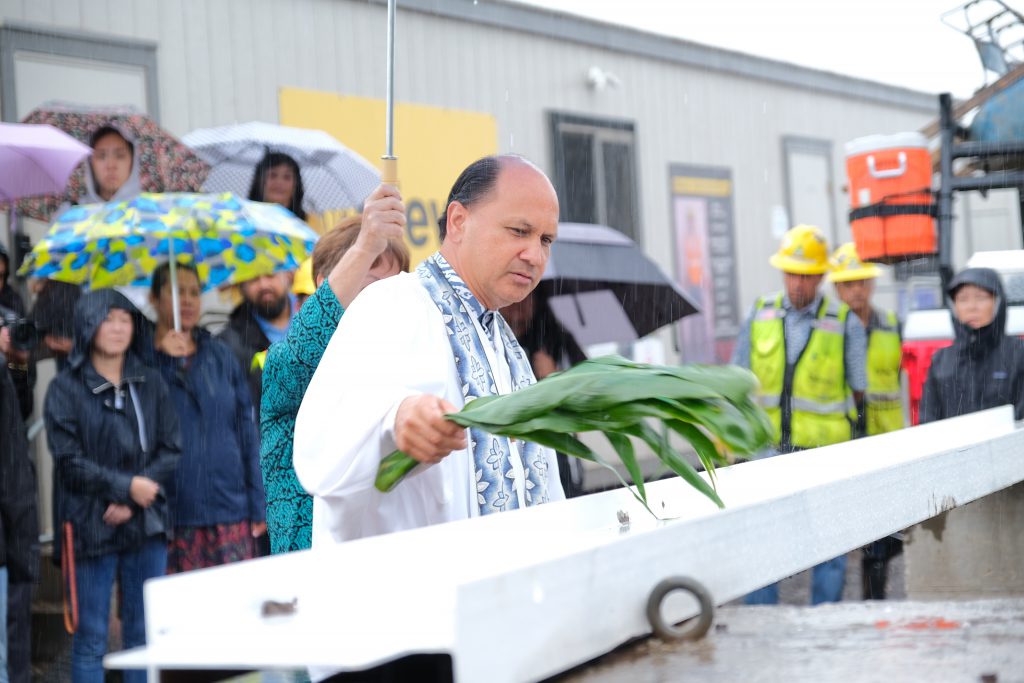 Kahu Kordell Kekoa offers a blessing for the final beam that will be installed in the Creative Media Building.

The Creative Media Facility at the University of Hawaiʻi–West Oʻahu reached a milestone of the installation of its final beam, and to mark the occasion, supporters marked the beam.

UH West Oʻahu students, faculty, staff, administrators, and supporters each autographed a 15-foot white beam in rainy weather during a largely ceremonial practice, commemorating their involvement in the 33,000-square foot building that is set to hold classes in Fall 2020. The beam will later be installed, marking the conclusion of one stage of the construction.

“Our Creative Media program, which will call this facility home, is important to UH West Oʻahu and the UH System as it provides our students with continuous opportunities to connect with our area K-12 schools and community colleges, and importantly to exciting, innovative careers!” UH West Oʻahu Chancellor Maenette Benham said of the $33,275,000 building that was awarded to local contractor Kiewit Building Group and local architect firm Next Design. 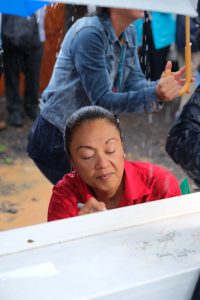 “Today marks another milestone for the Academy for Creative Media System and our partnership with UH West Oʻahu ACM,” Academy for Creative Media System Founder and Director Chris Lee said. “This will not only be the most technologically advanced, student-focused building for creative media education at the University of Hawaiʻi, but will ensure living wage industry jobs for the West Side and all of our state.”

See pictures from the day’s event at the UH West Oʻahu flickr album.