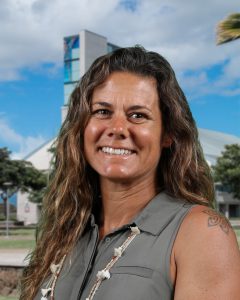 Using images from the 1940s to 1960s found in the ʻUluʻulu Henry K. Giugni moving image archive, which is housed at UH West Oʻahu, the article traces the development of cultural representations of food systems in Hawaiʻi. Mironesco received assistance from ʻUluʻUlu Archives head archivist Janel Quirante, who helped to find the images for the original analysis and provided screen shots for the publication.

According to the abstract, “Industry representations define the settler colonial plantation context as the dominant agricultural history of Hawaiʻi, advertising its accomplishments through educational films shown in schools at all grade levels. Pineapple and sugar industrial films portrayed plantations and agricultural fields as sources of jobs and identity creation in Hawai‘i and celebrated the paternalistic plantation system, alongside a complete denial of the subordination of plantation laborers, or the erasure of kanaka maoli (Native Hawaiian) knowledge of tropical agriculture. With footage from the ʻUluʻulu Archives, this article critiques the representation of plantation life as ‘benevolent’ since it ignores the Native Hawaiian emphasis on ecologically and socio-politically just principles of agriculture. Contemporary industrial films from Monsanto and Pioneer Hi-Bred Corporation continue to reinforce this erasure and perpetuate similar colonial plantation values in a present-day context.”