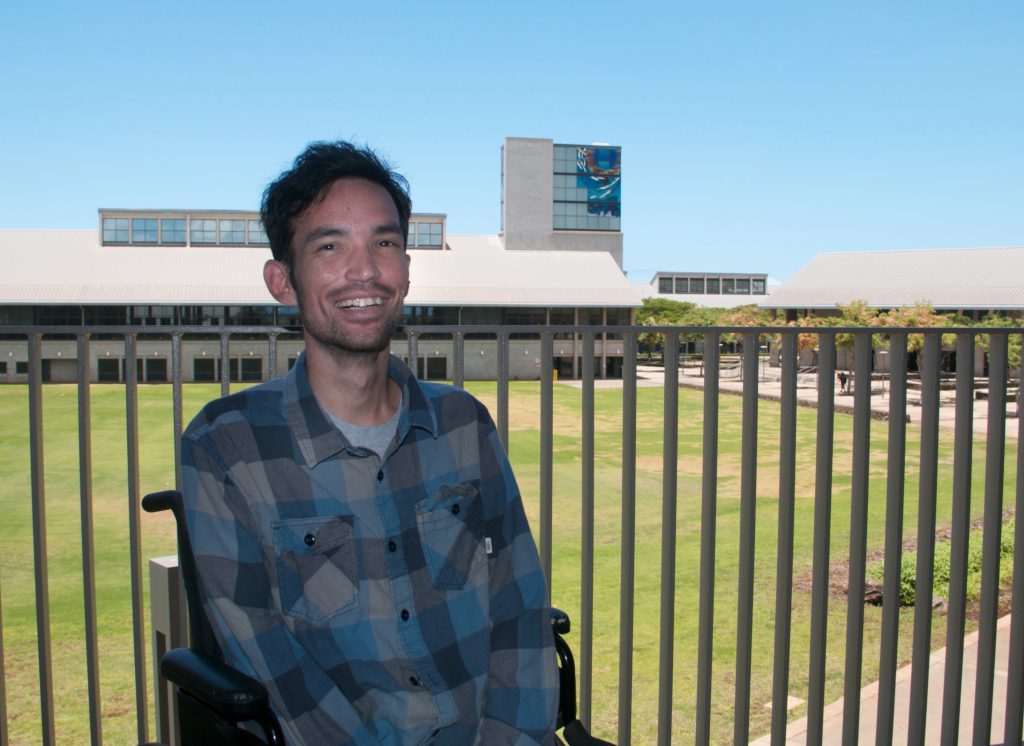 Jarek Barnett remembers coming to, his body in a heap on the sidewalk near Ala Moana. His nose was broken; somehow a hole had been punched in his cheek during the collision. There were numerous cuts and bruises from a drunk driver’s vehicle sideswiping his wheelchair.

His first reaction was to get up to leave, something that his friends quickly advised against until an ambulance arrived. But the fact that Barnett tried to get up and carry on with his night shouldn’t surprise folks who know him. Barnett has bounced back from worse, whether it be recovering from a stroke to graduate from high school on time, having heart problems and getting a transplant, or approaching college by seeking out tough courses and professors.

“I’ve been through a lot. I know what I want and that’s not the easy way out,” says Barnett, a Fall 2016 University of Hawaiʻi-West Oʻahu graduate with a Bachelor of Public Administration with a concentration in Health Care Administration. “I want to exceed my limits.” 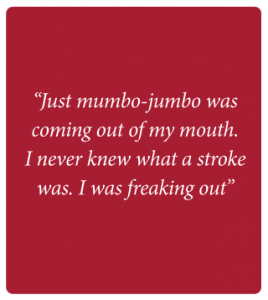 Barnett’s determination is forged from a series of unfortunate events that began just before his senior year at Mililani High School. At one time he saw himself becoming a mechanic and thought he was destined for either Leeward or Honolulu Community Colleges’ automotive programs. But in August 2006 his life swerved off course when he suffered a stroke that left him paralyzed.

Barnett remembers not feeling well and telling his dad that he was going to lay down on the living room couch.  “I woke up and I could not feel my right side,” Barnett said, explaining he waited a few minutes for feeling to return and becoming alarmed when he could not sit up. He tried calling for help but had trouble speaking, a warning sign that he might be having a stroke.

“Just mumbo-jumbo was coming out of my mouth.  I never knew what a stroke was. I was freaking out”

But Barnett was soon on his way to Pali Momi Medical Center, beginning a medical odyssey that would reduce others to despondency. Yet 12 years removed from his stroke, Barnett, 30, has two associate degrees, bachelor’s degree, and seeks challenges such as traveling alone.

Barnett regained slight use of his right side in the months after his stroke, and even attempted to head back to high school. But in December 2006 he suffered what was believed to be a heart attack during a stay at Kapiʻolani Medical Center’s Pediatric Intensive Care Unit; his cardiologist feared Barnett’s days were numbered without a heart transplant. Barnett was flown in a Learjet air ambulance to Los Angeles and taken to the Ronald Reagan UCLA Medical Center.

“I was fortunate. I only spent 22 hours on the heart transplant waiting list,” said Barnett, who was well enough to travel back to Hawaiʻi about a month before his high school graduation.  At that time Barnett had been absent for almost the entire school year and he still needed to complete coursework.

His prior diligence and industriousness paid off. Barnett said he’d taken summer school classes (and worked) during high school and he only needed a single English class to graduate by his senior year. Barnett was able to complete coursework at home. He participated Mililani High School’s 2007 graduation ceremonies.

Barnett spent the next several years pursuing different degrees after finding out an Automotive Technology degree was not possible for someone in his condition. He took classes at Leeward and Honolulu Community Colleges along the way.

It was during this period that he served a practicum with the Ronald McDonald House in Hawaiʻi, which besides operating a home in Mānoa, also maintained a family room within Kapiʻolani Medical Center. It was a homecoming of sorts for Barnett, who was born at the hospital and whose father had used the room years earlier while Barnett was in the PICU. 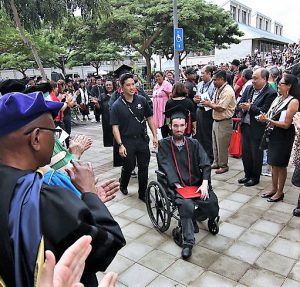 After the practicum ended, Barnett stayed on and served as a volunteer. He was on hand to help families and answer questions, growing close to some in the process.  It was rewarding work, though it could have its ups and downs.

“I still keep in touch with some,” said Barnett, . “I’ve attended patients’ birthday parties, but I’ve also been to funerals.”

Barnett also kept up with his friends and one night in 2011, while out with a group, got hit by a drunk driver as he attempted to cross Ala Moana in his wheelchair. “All of a sudden I was on the ground trying to get up,” Barnett remembers. “Luckily my wheelchair saved me.”

Patched up, he returned to work, which eventually turned into a paid position coordinating the family room’s operations. He would check families in, discuss how things worked and be available for any questions families might have. At the same time he completed the Human Services program at Honolulu Community College and obtained an Associate in Arts degree from Leeward. In 2014 he moved on to UH West Oʻahu to study Health Care Administration.

Barnett liked the small class sizes and professors who knew their students’ names and easily responded to students’ requests for help. For Barnett, who eschews the use of a Handi-Van ride, UH West Oʻahu’s easily-accessed car park and free parking was a bonus. (Barnett still maintains an interest in cars, and commuted to school in his silver Lexus IS 250 with rims and air suspension. The car has been in several shows, including those at the Hawaiʻi Convention Center. Previously he owned a Chevrolet Colorado Xtreme – also with air suspension – that was on the cover of a truck magazine.)

While at UH West Oʻahu he sought out challenging classes, often taking courses from Dr. Susan Young, assistant professor of Health Care Administration, and the late Dr. Gary Helfand. He also championed adjustments to campus doors that were difficult to open for some students.

“As a student, he was insightful in his analysis of the different topics of the changing health care environment,” wrote Young in an email.

“His experiences have provided a unique insight into the health care system. His classwork and written work demonstrated an interest in how the health care system could be improved, whether through policy or  managing the quality of care. Jarek always displayed a positive outlook and his volunteer work at the Ronald McDonald House at Kapiolani Medical Center while attending classes full time was quite impressive.”

Barnett graduated in December 2016 with a 3.77 GPA and kept his job with Ronald McDonald House until he was laid off when Kapiolani Medical Center took the operation in-house. He said he has begun writing an ebook about his life and has given inspirational talks, something he’d like to do more often.

Barnett also took a couple of trips, visiting his grandmother in Mississippi in 2017 and earlier this year going to California by himself (“That was scary”). He visited a nurse he befriended while hospitalized, and also met the family of his heart donor, a soon-to-graduate high school student who had the misfortune of being caught in a drive-by shooting after he went out to buy some spicy Cheetos. Barnett swears he woke up from heart transplant surgery craving spicy Cheetos, a snack he had never liked before. The craving was such that he asked a nurse to get him some.

The donor’s parents only spoke Spanish and their daughter translated for them. Barnett doesn’t speak Spanish, but he said he knew what exactly what the donor parents were expressing.