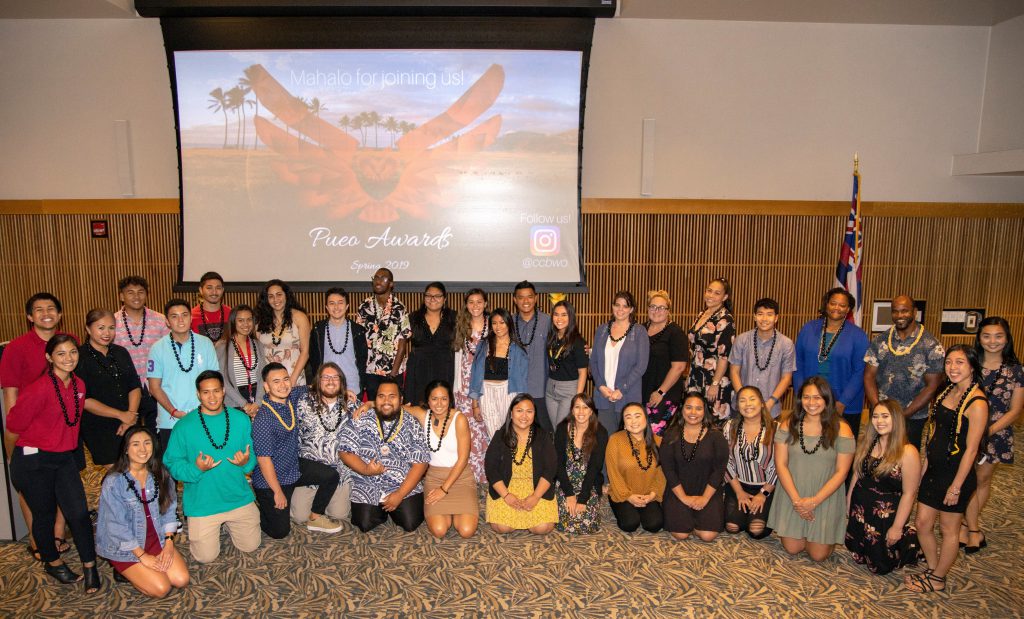 The Pueo Awards honored outstanding students during an April 26 ceremony

The Spring 2019 Pueo Awards spotlighted and celebrated exceptional UH West Oʻahu students for their contributions and achievements in the classroom, as a leader, or performing notable work as a student employee.

Sharmaine Kahele-Madali and George Stowe III were the co-winners of the Student Service & Leadership Distinction awards, while Sydney Millerd was the winner of the Emerging Leadership Award. Ernie Salas won the Student Employee of the Semester award. Lizchel Ugalde and Elijah Maluo served as student co-emcees for the event.

The Pueo Awards ceremony is an end-of-semester event recognizing student excellence in academic programs, efforts they made as student employees, and their involvement and leadership. In addition to honoring students, the April 26 ceremony featured medals given to faculty and staff as well as an overview of the semester’s highlights and accomplishments by Chartered Student Organizations – including the Associated Students of the University of Hawaiʻi-West Oʻahu, the Student Activity Fee Board, the Student Media Board, and Campus Center Board.

Incoming ASUHWO Senate members were also sworn for the 2019-2020 academic year. The event was coordinated and sponsored by the Campus Center Board, which provided funding for the certificates, lei, pins, and dinner catered by Aunty Pasto’s, assorted macaroons and cheesecake. Members of the Campus Center Board include Whitney Murphy, A.J. Molina, and Michelle Zheng.