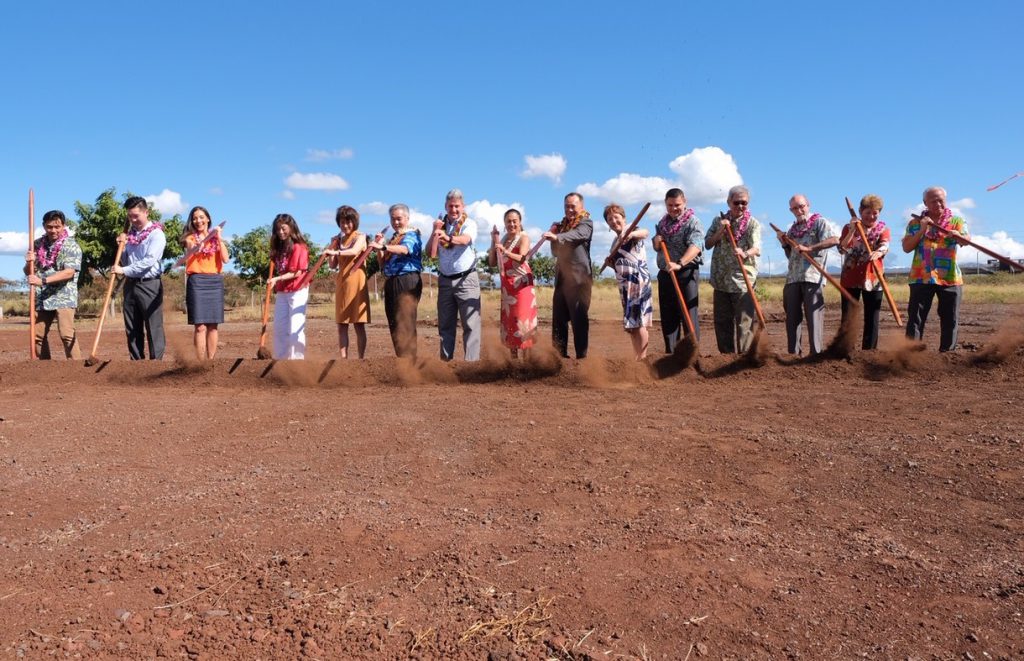 Ground was broken for an Academy for Creative Media building at UH West Oʻahu on Friday, as Gov. David Ige and other elected officials joined University of Hawaiʻi President David Lassner, Chancellor Maenette Benham, and others on the Kapolei campus to commemorate the start of construction.

Work on the $33.3 million, two-story building is scheduled for substantial completion in June 2020 and will be the seventh structure built on the Kapolei campus. UH West Oʻahu moved to its current home in 2012 and for the past two years has been named the fastest-growing public baccalaureate institution in the nation. 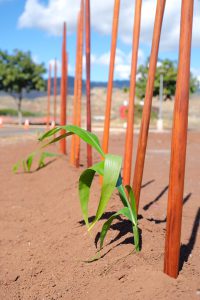 ʻŌʻō and Ti leaves used in the groundbreaking and blessing

The groundbreaking was heralded by speakers who noted it was the culmination of 15 years of work, and that it marks a milestone in efforts to boost creative media education in Hawaiʻi.

“Today is a truly a golden ticket day where we can break ground on a building we’ve wanted for a long time,” pronounced Gov. Ige. “I am excited about what this building brings.

Ige credited Candy Suiso, executive director of Waiʻanae High School’s highly regarded Searider Productions program, as demonstrating that digital media was a viable option for students, and supporting the creation of the Academy of Creative Media, and for the constructing of a building at UH West Oʻahu. He also thanked others who had a hand in getting the structure built and noted it will be a state-of-the-art structure that will will be the launching point for careers “that our children and students want.”

The Academy for Creative Media building will link complementary facilities and programs throughout the UH System and across the state as a catalyst for Hawaiʻi’s intellectual property workforce. Creative Media has become one of UH West Oʻahu’s quickest-growing programs after starting with 13 students in 2013. Today it has more than 12 times that number and has transfer agreements with the UH System’s seven community colleges, allowing creative media graduates from the two-year campuses to complete a four-year degree.

The program is designed to prepare students for work in the creative economy, including for positions within video game design and development; interactive design; motion and visual graphics; transmedia film; and television production and new media.

In addition to praising Suiso, UH President Lassner recognized Chris Lee, founder and director of the Academy for Creative Media System, and that the new building will be a first for UH in being available to students from other campuses.

“I can hardly wait to see you here again for the grand opening,” said Lassner.

Dignitaries attending the groundbreaking included members of the UH Board of Regents, the heads of the state and Honolulu film offices, and Lee, director and founder of the Academy for Creative Media for the UH System. Also on hand were representatives from Waipahu, Waiʻanae and Nānākuli high schools, along with officials from the state Department of Education and Kamehameha Schools.

They were told the new building was specifically designed for creative media education, allowing the program to offer more courses in media and art. It will also house resources that students can use to complete projects.

in addition to thanking elected officials, the UH Board of Regents and UH System administrators, Benham also acknowledged the Roy & Hilda Takeyama for supporting the ACM program at UH West Oʻahu, as well as the MacNaughton Group, the Kobayashi Group, and James Campbell Co. LLC for their past support.

There also will be covered outdoor spaces along with an LED wall facing a amphitheater consisting of a grassy seating berm that can accommodate 250 people.

The design-build contract for the structure was awarded to Kiewit Building Group. The architect of record is Honolulu-based Next Design LLC. Plans call for the building to be ready for classes in the 2020 fall semester.

The Academy for Creative Media System engages all of the campuses within the University of Hawaʻii system and works collaboratively across the system, drawing upon programs, faculty and students system-wide. ACMS is fulfilling its mission by supporting complementary creative media programs at all ten campuses. The programs teach the 21st century skills at the nexus of evolving technology, art, storytelling and content creation that students need, not just in the media fields, but across all industries. ACM System is part of the UH Systemʻs Office of the Vice President for Research and Innovation. For more information visit www.acmsystem.hawaii.edu.