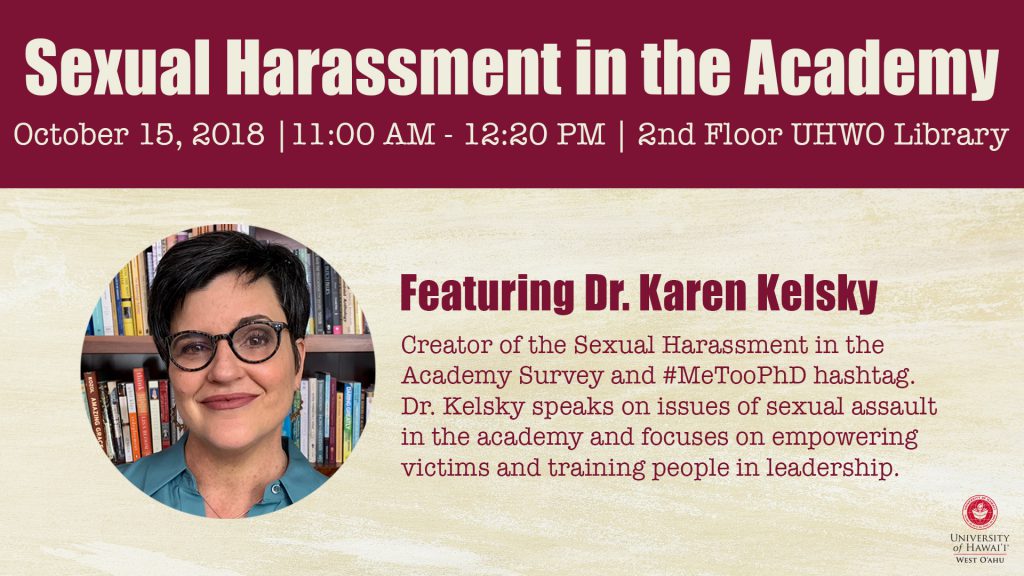 Dr. Karen Kelsky, a former tenured professor who uncovered a surprising amount of sexual harassment in higher education and coined the #MeTooPhD hashtag, will give a talk titled “Sexual Harassment in the Academy” on Monday, Oct. 15 in the James & Abigail Campbell Library.

UH West Oʻahu’s Distinguished Visiting Scholars Committee is inviting students, faculty and staff to the talk, which is scheduled for 11 a.m. to 12:20 p.m. in the library’s second-floor exhibition area. Kelsky also will give a talk at the William S. Richardson School of Law while in Hawaiʻi.

Kelsky received her Ph.D. in cultural anthropology from the University of Hawaiʻi and is nationally known for her work on several higher education issues along with being the creator of the Sexual Harassment in the Academy Crowdsource Survey. The survey was launched in December 2017 and provides an anonymous platform for Ph.D. candidates and others to describe their experiences. It quickly attracted more than a thousand reports of unwanted advances in academic settings.

Today the site has more than 2,400 responses. The survey and creation of the #MeTooPhD hashtag propelled Kelsky into the national limelight as reporters clamored for interviews. Kelsky wrote about the survey on her popular blog, The Professor Is In, as well as a column she has for the Chronicle of Higher Education.

“The survey shows that these incidents occur at every type of academic institution and in every discipline,” Kelsky wrote in one of her columns, explaining a grotesque finding of the survey was a numbing repetitiveness of reports about attacks by senior men on junior women.

Kelsky already had a notable presence in academia prior to her survey attracting attention, having gained notice for her academic career and job service consulting service, The Professor Is In.  Kelsky founded the firm after holding two turned professor positions at the University of Oregon and the University of Illinois at Urbana-Champaign and is the author of The Professor Is In: The Essential Guide to Turning Your Ph.D. into a Job. Besides her consulting work, Kelsky, an Oregon resident, speaks nationally on issues of sexual assault in the academy with a focus on empowering victims and training people in leadership.