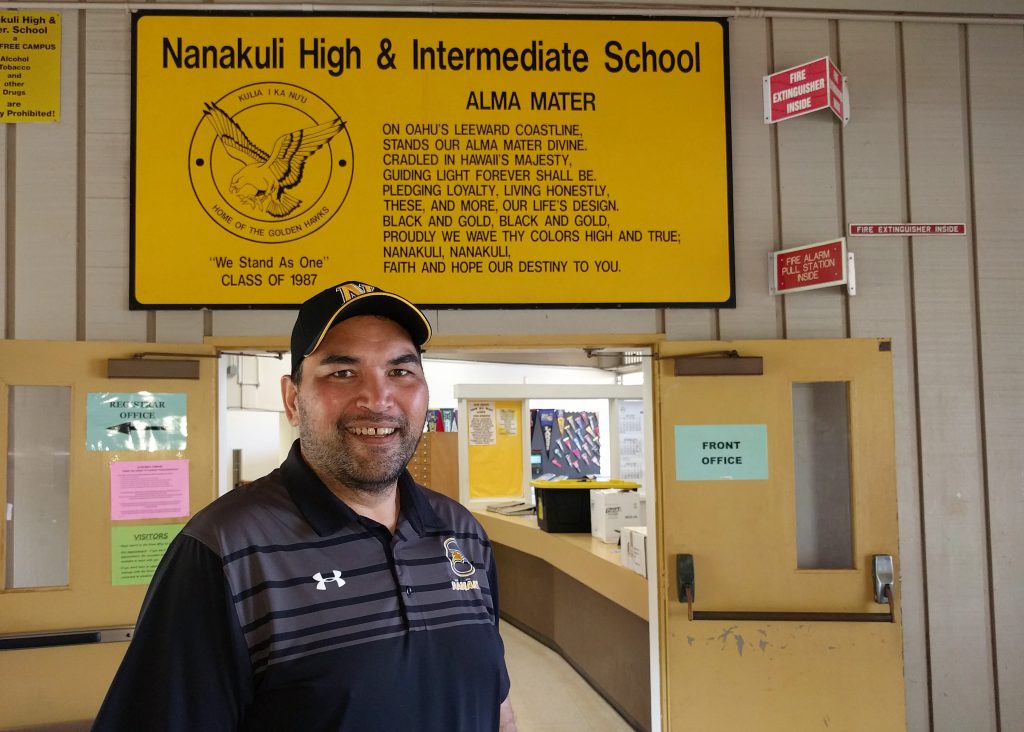 Darin Pilialoha admits he’s stuck in his job. But as the principal of Nānākuli High and Intermediate School, there’s no place else he’d rather work than the campus in the back of Nānākuli Valley.

The UH West Oʻahu alumnus has a tough role–one that Pilialoha has gladly accepted during the past decade. Nānākuli High and Intermediate School (NHIS) lags the state’s top performing schools and doesn’t have a reputation as an academic powerhouse. Pilialoha has problems that principals in well-heeled areas don’t–worries about students who are homeless or others who just are trying to survive.

However, ask him if he’d ever apply for a position at another school, and Pilialoha is quick to answer. “To tell you the truth, no,” says Pilialoha, wearing a black baseball cap emblazoned with a large gold “N.” The Under Armor polo shirt hanging from his 5’11 frame similarly carries Nānākuli’s Black and Gold colors and name. “There’s a vested interest why I’m here.”

He was born and raised in Nānākuli, a prideful community on Oʻahu’s westside. At NHIS he was a standout: All-state offensive lineman on the ‘85 football team; National Merit Scholar; and a charter member of NHIS’ National Honor Society chapter. After graduating in 1986, he returned to help coach the football team and eventually he got his first teaching and vice principal posts at the school.

Pilialoha’s reasons for his championing of Nānākuli High and Intermediate School run deeper than just having spent milestone moments on the campus. Some of it can be traced back to his parents, who he says instilled in him the concept of service. For years Pilialoha’s goal was to get a business degree, become wealthy, and give back to the Nānākuli community.

But as he admits, life sometimes takes you elsewhere. His initial college effort, a year spent at Pacific University in Forest Grove, Ore., wasn’t a success academically. Pilialoha bluntly says he wasted an opportunity and characteristically has used it as a lesson that can be relayed to students.

“We (NHIS) will give you opportunities,” Pilialoha says, describing one of his messages to students. “Just take advantage of it.” 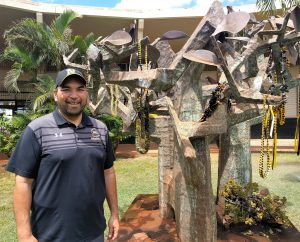 Pilialoha with a sculpture by artist Satoru Abe on the school’s campus. Seniors are asked to leave a lei when they graduate as a way of saying thank you.

Similarly he has used lessons from his upbringing and time at UH West Oʻahu to inform his educational career. He candidly says his family didn’t have a lot of money, but that his mother, who grew up as a foster child, always found ways to help others. It’s a trait that’s seen in Pilialoha’s dogged work in service of students and staff at NHIS. From UH West Oʻahu he learned the power of professors engaging students beyond classwork to really get to know and help them.

Pilialoha recalls how he struggled with what to do when he had, while attending UH West Oʻahu, an opportunity to work at Hawaiian Electric Co., which paid well and had good benefits. A hypothetical fork in the road lay before him; one lane continued his academic journey to a Bachelor of Arts in Public Administration with a concentration in Criminal Justice, the other promised a union job and more money than he was making as a meat department apprentice at the Pearl City Daiei store. He asked then-Sociology Professor Linda Nishigaya for advice. She responded that he should do whatever he believed was going to benefit him more in the long run, thereby providing a framework for his decision.

“One of the biggest things we focus on as a school is to get to know students beyond their student ID number,” said Pilialoha, saying it can pay off in determining why a student is not doing well, such as why they aren’t sleeping well, or why academics is not a priority for them.

Pilialoha, who went on to get a certificate in special education from the University of Hawaiʻi at Mānoa, has fond memories of taking classes in the portable classrooms that formed UH West Oʻahu’s facilities at Leeward Community College.

“It was just magic that happened in those portables,” Pilialoha said, explaining students and faculty members became like family in the close quarters. Emeritus Professor of History Daniel Boylan remains his favorite professor from his college days. “You weren’t a number. You were a human being.”

The relationship with UH West Oʻahu continues, through the lens of Pilialoha’s responsibilities to NHIS. The school participates in early college and STEM programs, and the ʻOnipaʻa program for incoming UH West Oʻahu freshman. He also has worked with Stephanie Kamai, a UH West Oʻahu associate specialist for the Division of Education, on field placements of teachers at NHIS.

“Darin is very passionate about Nānakuli, the community, the families, and the school. In working with him, he has been very supportive of graduates and helping connecting his current high school students with graduates that are currently in college,” said Joseph Mareko, a UH West Oʻahu admissions counselor and Nānākuli graduate.

“This approach allows students to have a tangible college resource rather than seeking help from someone who does not come from the community. His leadership has helped Nānākuli improve over his years of service and I expect more improvement because of his “Defend Da Valley” mentality that promotes empowerment within the students to strive and seek the highest.”

Pilialoha believes his and his staff’s efforts are starting to gain traction. He can reel off statistics and examples that demonstrate progress. Nānākuli’s graduation rate has increased from 61 percent prior to his arrival in 2008 to 81 percent currently; graduating students have gone from earning $300,000 in scholarships to $3.5 million; the number of National Merit Scholarships for Nānākuli is increasing.

This year a student scored 32 on the ACT, or in the 98th percentile. She was recruited by Georgetown University, Pilialoha said. He said he’s also been able to institute programs to help bring dropouts back to school, and work on identifying and helping students graduate who otherwise would have been a few credits short. Pilialoha said he also has worked to get more advanced placement classes despite having a small high school population (600).

Staff turnover has also declined. Pilialoha said there were 22 staffers who were on their way out the door as he came in; there were nine this year. He’s also worked to recruit teachers through Teach For America.

“We’re actually a hidden gem,” says Pilialoha, adding that he’s been able to convince desirable Teach for America participants to stay after their complete their two-year assignment at the school.

As Pilialoha speaks, a banner hangs across the campus from the NHIS Administration building. It reads “Only You Decide What Legacy You Leave.” Inside a meeting room Pilialoha explains a speech he gives when students arrive and when they depart. He challenges students to know where they come from, to be proud of who they are, and to be good people.

It’s a lesson that could well be exemplified by Pilialoha himself.