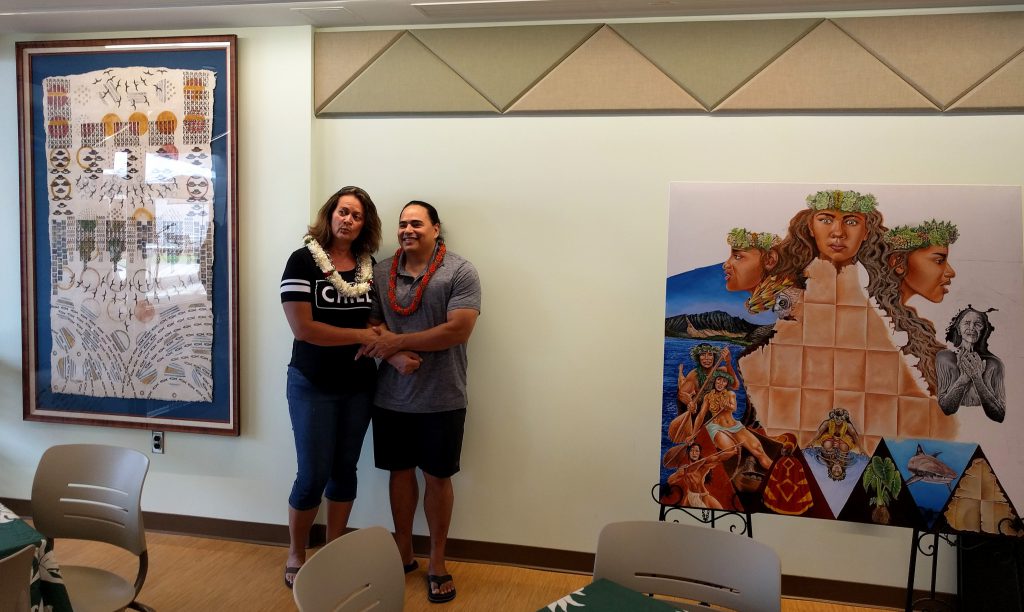 Prominently featured at Tuesday’s opening of the new Nāulu Center for Culture, Engagement & Well-Being were two works of art that will play a role in the facility’s effort to provide connections to the land, culture and moʻolelo (stories, history) of West Oʻahu.

Two artists, Dalani Tanahy and A.R. Kupihea, were among the celebration’s honored guests, with their noteworthy works on display in the Nāulu Center, which has among its objectives is the perpetuation of culture to strengthen a sense of belonging and place. Chancellor Maenette Benham remarked how the new facility will fit with the school’s goals and help with the campus’ efforts to Pūpūkahi I Holomua (move forward together).

Tanahy, a kapa artist who will serve as the Hawaiian-Pacific Studies Program’s Master Kumu during the 2018-2019 academic year, is well represented at Nāulu Center, with two framed kapa adorning walls, as well as having parts of one of her kapa replicated on film placed on the center’s windows. 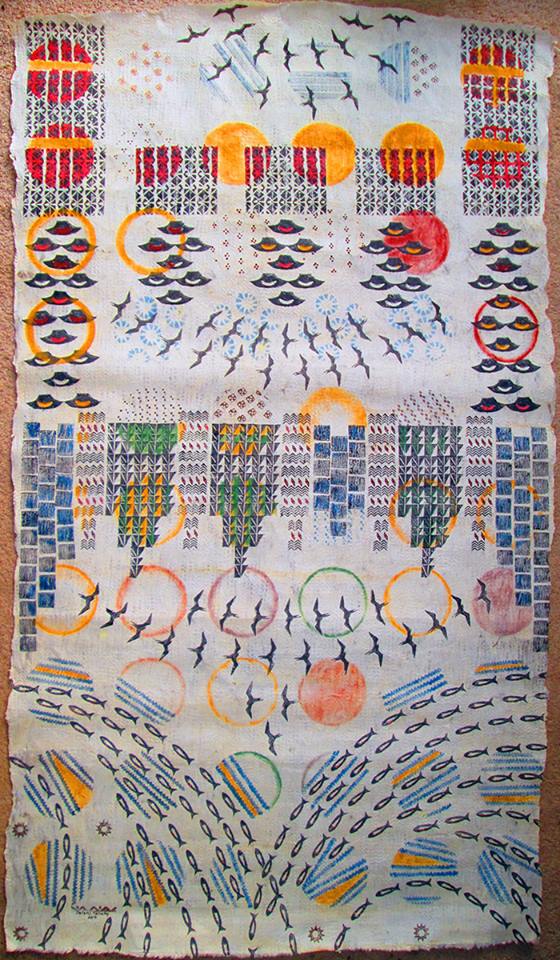 The larger of Tanahy’s two pieces draws upon stories and places in West Oʻahu. For example, plentiful mullet were born and matured in Pearl Harbor before venturing into the ocean are included on the kapa and are symbolic of students who grow at UH West Oʻahu before venturing out into the world. The representation of water alludes to fresh springs that helped nurture kalo, and is symbolic of growth.

The “Moʻolelo of Honouliuli,” a mural painted by artist A.R. Kupihea, similarly draws upon the stories, people, and culture of the places surround the campus. Kupihea, along with his wife Kehaulani, an archaeologist, researched old Hawaiian text, including Hawaiian language newspapers, for the project. The result is a mural with various aspects of place, including Kaʻahuahau, a guardian shark of Puʻuloa, is depicted, as are a pueo and a kalo plant along with various people from moʻolelo. 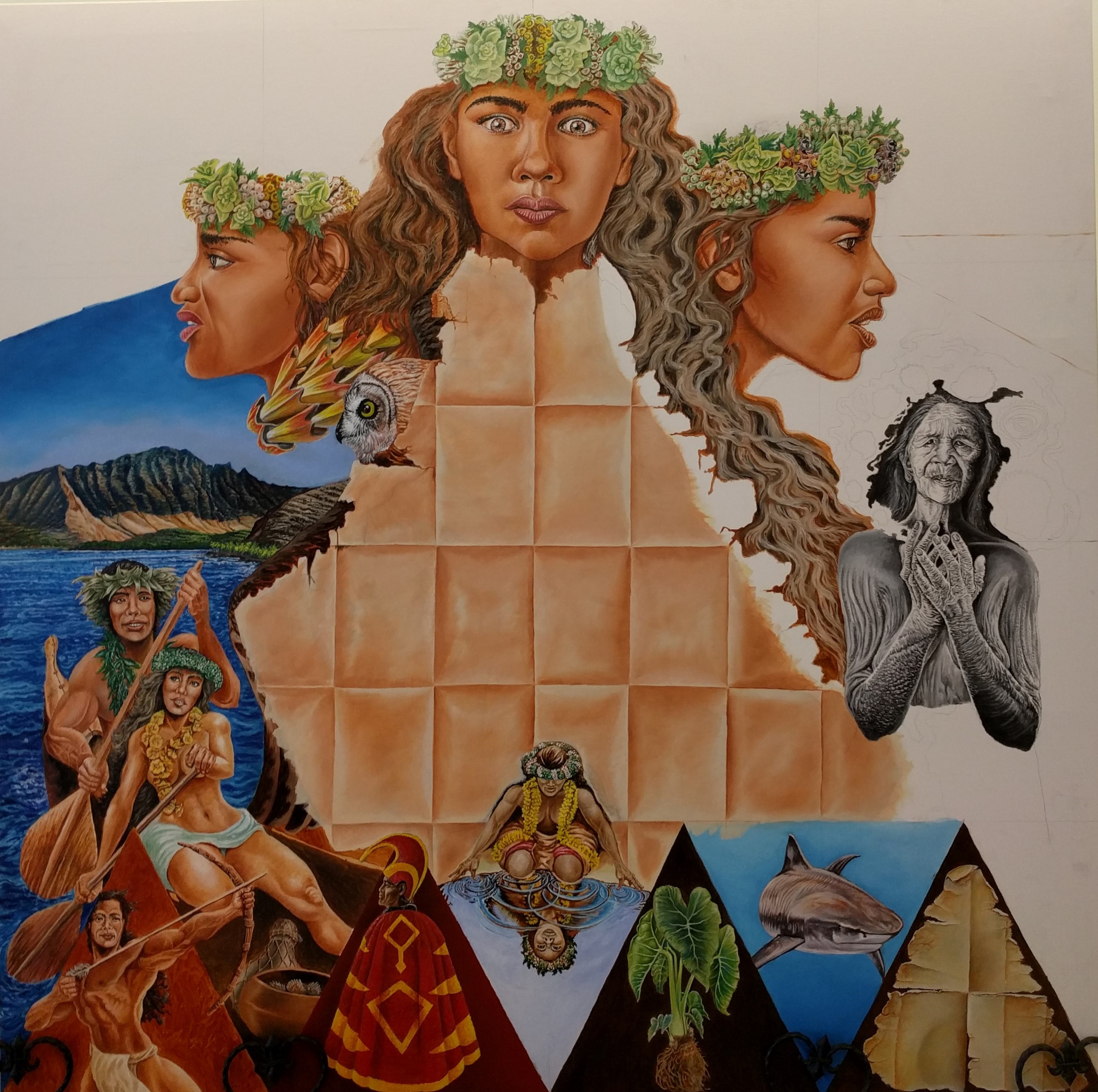 Once Kupihea’s mural is completed, a larger digitized version will be placed on a Nāulu Center wall

Plans call for the mural to be digitized, blown up to a larger size, and installed on a wall.  There are also plans to create a website highlighting the stories that are memorialized on the mural. Kupihea also will use the stories for a summer early college class he will teach on the campus. Similarly, the moʻolelo behind Tanahy’s kapa are highlighted in four framed explanations in the Nāulu Center’s conference room.

Melissa Saul, Director of the PIKO Project, which obtained funding for the center, said the artwork plays an important role in helping people understand the culture, place and stories of the area. That’s important when it comes to incorporating Hawaiian ways and culture into classrooms at UH West Oʻahu and fostering connections between the campus and the broader community.

The PIKO Project has in recent years run Pili ʻĀina, a program to help new faculty learn about the culture, traditions, and lands surrounding the campus. The event showcases how place and people are fundamental to Hawaiian culture and understanding in the hope faculty use the knowledge in their classrooms. Saul said PIKO hopes to offer more of the programs, and helping participants visualize what’s been passed down through oral tradition.

The art should also help students connect with places in the community and learn their Hawaiian names, said Puʻu Zablan, PIKO Project assistant director, explaining that students may not know Fort Barrette is known as Puʻuokapolei, or that Kalaeloa was for years known as Barbers Point. The art will help expose students to the stories and names, helping improve their connection to the community at a time when they are discovering themselves, Zablan noted.

This ability to connect people to others, to values, to places and culture, goes to some of the goals for the Nāulu Center, he said. Besides providing connections among people who use the center to the land, culture and moʻolelo, the Nāulu’s Center’s goals include: