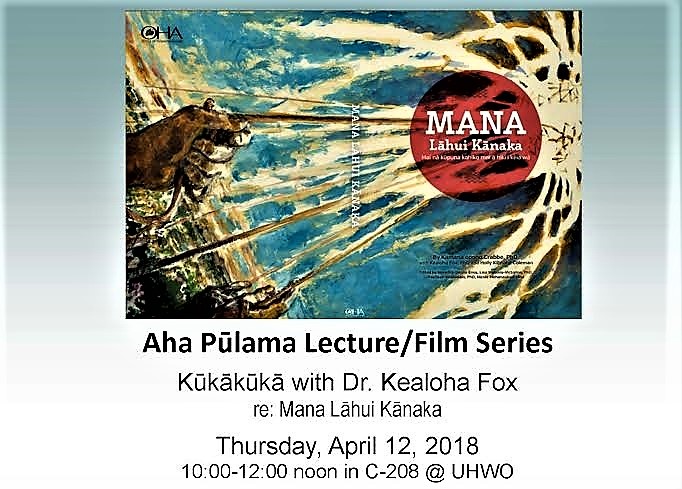 Dr. Kealoha Fox will speak on Mana Lāhui Kānaka as part of UH West Oʻahu’s ʻAha Pulama Lecture and Film series from 10 a.m. to noon on Thursday, April 12, in C208.

Fox is a co-author of “Mana Lāhui Kānaka,” a 300-page book devoted to an exploration of mana, what it is, how it is articulated, and its importance to Native Hawaiians. The book, which is available for free online (www.oha.org/mana), was the result of years of research by Fox and co-authors Kamanaʻopono Crabbe and Holly Kilinahe Coleman.

Crabbe is chief executive officer of the Office of Hawaiian Affairs (OHA). Mana Lāhui Kānaka expands on Kūkulu Hou, Crabbe’s vision for rebuilding the Native Hawaiian people and communities by using the culture, practices and wisdom of our kūpuna as a guide for our future. 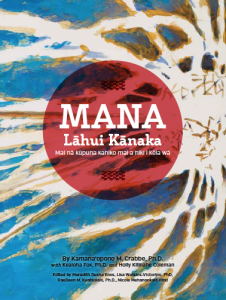 Western scholars have tried to define mana in Pacific cultures as spiritual, supernatural and a magical force, with English translations of mana thought to fall short from a Native Hawaiian perspective of expressing its meaning and significance.

“Understanding mana became critical to the Kūkulu Hou framework because mana was central to our ancestors’ worldview,” Crabbe said at the launch event for Mana Lāhui Kānaka.

“But when trying to delve further into the issue, we realized that there was little written literature on mana. That led to five years of research to really understand this concept of mana, which is one of the fundamental pillars to our identity as Native Hawaiians. We wanted to capture the essence of mana as our kūpuna lived it, how we aspire to achieve it in our daily lives and continue its legacy in the 21st century.”

Crabbe and Fox have co-authored several articles, including “Kūkulu Hou: A Vision to Reestablish and Rebuild the Mana of Kānaka ʻŌiwi”, which appeared in Kamehameha Schools’ journal, Hūlili.

Fox has worked at the Office of Hawaiian Affairs as an executive manager, with responsibility for OHA’s Mauli Ola (health) initiatives as well as supporting the Kūkulu Hou framework. Fox, who received her PhD in Biomedical Sciences from the John A. Burns School of Medicine, was a Mellon-Hawaiʻi Doctoral Fellow, and a Founder Region of Soroptimist International Dissertation Fellows.