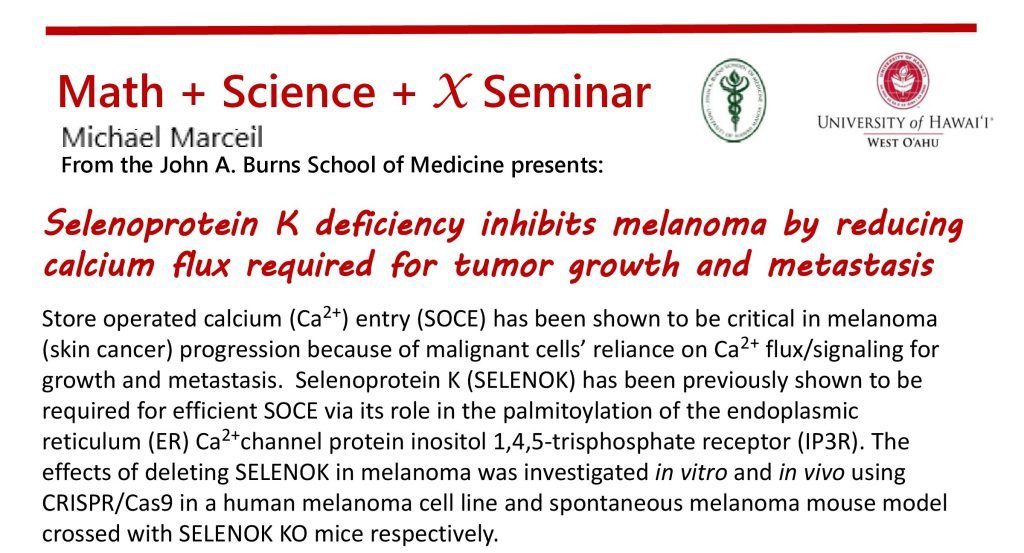 Michael Marciel of the John A. Burns School of Medicine will discuss a selenoprotein he is studying and how it is being used to study cancer cells during a Math + Science + X seminar at 10:30 to 11:30 a.m., Friday, March 9, in E133.

Marciel has co-authored a chapter on selenoproteins and Metastasis written with cancer researcher Dr. Peter R. Hoffman, head of the Hoffman Laboratory at the University of Hawaiʻiʻs John A. Burns School of Medicine, in Advances in Cancer Research. Among other information, the chapter looked at the role different selenoproteins play in promoting and inhibiting metastatic cancers.

Marciel will talk about Selenoprotein K during his visit to UH West Oʻahu. The abstract of his talk is:

“Calcium ions are very important intracellular messengers and impact nearly every aspect of cellular life. Calcium ion can be found throughout the cells cytoplasm and organelles (especially in the mitochondria and Endoplasmic Reticulum) and can have many roles in signaling mechanisms involved in transcription, excitability of neurons, motility of proteins, and apoptosis. The deregulation of the calcium signal has been linked to each of the “cancer hallmarks” and alterations in calcium transport proteins are associated with some cancers. Store operated calcium (Ca 2+ ) entry (SOCE) has been shown to be critical in melanoma progression because of malignant cells’ reliance on Ca 2+ flux/signalling for growth and metastasis. Selenoprotein K (SELENOK) has been previously shown to be required for efficient SOCE via its role in the palmitoylation of the endoplasmic reticulum (ER) Ca 2+ channel protein inositol 1,4,5-trisphosphate receptor (IP3R). The effects of deleting SELENOK in melanoma was investigated in vitro and in vivo using CRISPR/Cas9 in a human melanoma cell line and spontaneous melanoma mouse model crossed with SELENOK KO mice respectively.”