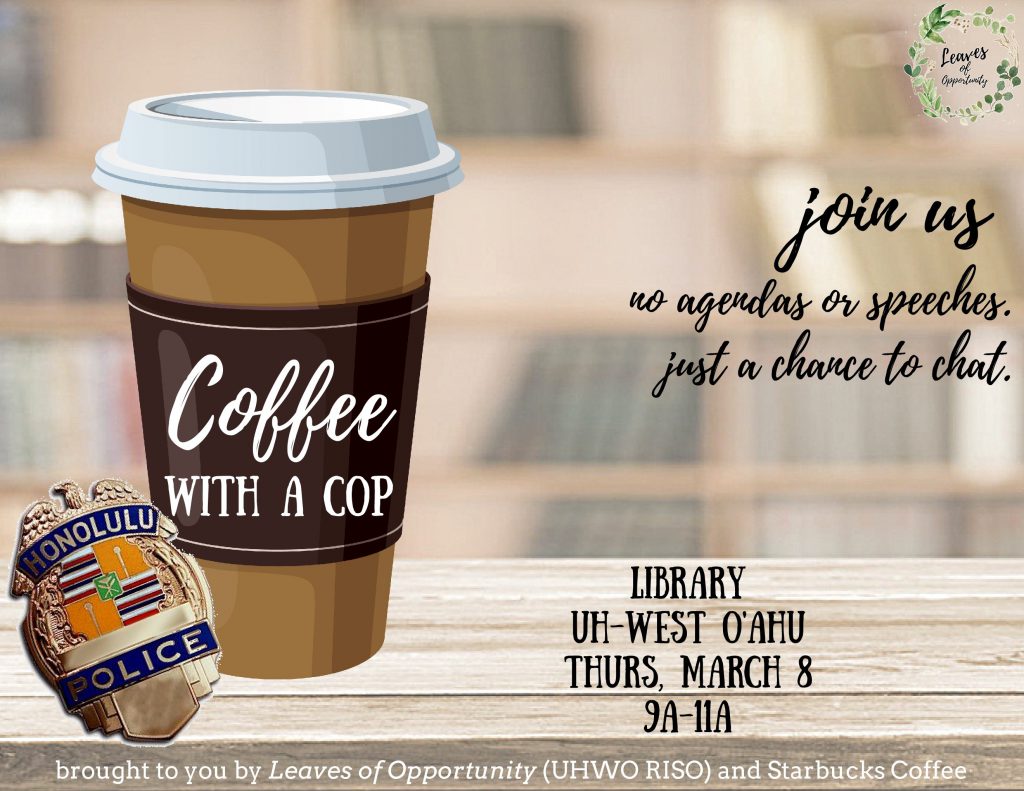 You are invited to enjoy a cup of coffee and conversation with a police officer on March 8, as UH West Oʻahu holds its inaugural “Coffee with a Cop” event.

Several Honolulu Police Department officers are expected for the event between 9 and 11 a.m. in the lobby of the James & Abigail Campbell Library. Event organizers are hoping people will stop for a brief chat and get to know the officers while grabbing a cup of coffee.  The session is being hosted by “Leaves of Opportunity,” a UH West Oʻahu student organization, and Starbucks Coffee.

Such events have taken place all over the United States in recent years. The Hawthorne, Calif., Police Department is credited as hosting the first such coffee klatsch in 2011 as a way to interact more successfully with the citizens they served.  Since that time Coffee with a Cop events have been held in all states as well as expanding to Canada, Europe, Australia, and Africa.

According to Leaves of Opportunity, organizers hope to host officers in a welcoming, engaging environment with the student body and soften any stigma students may associate with police. It will be an appropriate and communicative environment where passing students can sit and have casual conversation with the guests.

The first Coffee with a Cop session in Hawaiʻi occurred in April 2016.  Leaves of Opportunity President Anthony Amos said this is the first time it will be held on the West Oʻahu campus. Amos, who is also an Associated Students of the University of West Oʻahu senator, said Leaves of Opportunity decided to pursue the event after it was suggested by the library’s Carina Chernisky.

Among the expected attendees is Corporal Ben Lloyd of HPD’s District 8, which covers much of West Oʻahu, including ʻewa, Kapolei, Nānākuli, Waiʻanae and Makaha. Members of UH West Oʻahu’s campus security team are also expected to attend.